FILE PHOTO: Members of the gendarmerie escort a man out during Pope Francis' weekly general audience at the Vatican, February 2, 2022.

VATICAN CITY – A man interrupted Pope Francis’ general audience at the Vatican on Wednesday, February 2, shouting “This is not the Church of God!” in English and waving a medical mask he had removed from his face before being taken away by police, a Reuters witness said.

The man, who was also heard shouting the word “mask”, was sitting alone in the back of the audience hall, away from the section where most of the people were seated.

The man, who appeared to be in his late 40s or early 50s, held up a black medical mask in his left hand as he shouted.

Pope Francis blesses those everyone loves to hate – tax collectors A Vatican source said the man was an Irish national living in Rome who had made similar outbursts in several Roman basilicas in the past.

He was handed over to Italian police, a normal procedure when someone is detained in the Vatican, a sovereign city-state surrounded by Rome.

The Pope heard the shouting but it was not clear if he understood what the man was saying. After the man was taken away by Vatican police, the Pope asked those in the audience hall to join him in saying a prayer for the man.

“A few minutes ago we heard a man who was screaming, shouting, who had some kind of problem, I don’t know if it is physical, psychological or spiritual – but he is a brother of ours who has a problem,” Francis said.

“I would like to end by praying for him, for our brother who is suffering, poor man, because if he was shouting, it is because he is suffering,” Francis said. “Let’s not be deaf to the needs of this brother.” 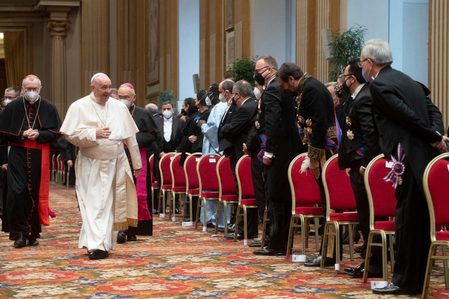