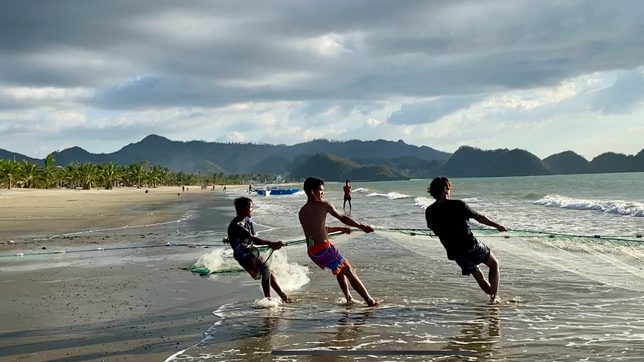 Facebook Twitter Copy URL
Copied
In Barangay 5, Christmas will be cold and dark, but folks will be in their homes. Thousands of others are huddled in evacuation centers.

SIPALAY CITY, Negros Occidental – The pristine waters of the sea, the laughing young fisherfolk, the sun’s rays filtering through clouds in the late afternoon of December 20 on the public beach – they’re scenes straight out of tourist brochures and websites featuring the attractions of Negros Occidental’s southernmost city.

Elsewhere in the 379.78-sq-km city that is 175 km south of Bacolod City, the province’s capital, the landscape is grim.

The typhoon destroyed more than 3,000 houses in the city and damaged 8,500 more, according to Sipalay Mayor Gina Montilla Lizares. Thousands of the affected 80,000 residents remain in evacuation centers.

There was nothing left of farmlands awaiting harvest in Barangay Gil Montilla, where homes stood without roofs and, in some cases, without walls the morning after.

But even in areas like Barangay 5 in the city proper,  where floods were not as severe, every corner has structures flattened by trees and locals salvaging material and repairing what was left of their homes.

Despite warnings, folks we interviewed on December 20 said they were unprepared for the calamity. Archie, a fish vendor residing in Barangay 5, said they did not expect the strong storm surge of nearly two meters nor did they anticipate the devastation ahead.

“We didn’t expect Sipalay to be the center [of the typhoon],” he said in Ilonggo. Sipalay, after all, has survived natural disasters before with little damage.

While he was able to safely evacuate his family, Archie stayed at home – one he shared with friends and extended family – to observe the storm. “Some of us were even taking videos. Outside, we saw adults with their children running for cover on the streets as winds tore their roof down. But there was nowhere to go because other houses were also damaged and exposed,” he said.

Barangay 5 captain Joelen Moises said the community damage is not as severe as in flooded areas farther from the city proper. “Houses were damaged by the winds, but no lives were lost here because the water wasn’t high as Barangay 5 is on a raised area,” Moises said.

Still, families in this barangay have been struggling to rebuild their houses with whatever resources they can gather. Some, like Archie, sought help outside Sipalay, a fourth class component city.

“We received small amounts of money from friends in Manila and immediately bought sand and hollow blocks. We have no choice; we can’t work because we are too busy repairing our houses. Fixing the roof.”

Livelihoods are at stake as well. “There is no fish to sell, and when there is, the fish only rots because we have no ice. So there’s a shortage of food,” Archie added.

Food and water are scarce. At ALCU Best, the nearest water station in the area, residents lined up hundreds of empty water jugs for refilling. Folks also gathered there to charge gadgets on the generator set. But with gasoline scarce and expensive, residents don’t know how this critical operation can last.

When asked about relief efforts in their area, residents said they are yet to receive any help. “It hurts,” replied Archie. “It’s election season. I already know that they’ll show off when the election nears, when it’s too late. But we need help now. Not in the coming days, now.”

She recalled how they evacuated in the midst of the storm: “Yung kapitbahay ko may sasakyan, pumunta sa gym. Ang lakas-lakas ng hangin. Pag hindi ka maglagay ng tabon sa mukha mo, maigo imo mata.” (Our neighbor had a vehicle to take us to the gym. The wind was so strong; if we didn’t cover our eyes, we would have been hurt.) It took them half an hour battling wind and floodwaters to reach their refuge, which in normal times is just a few minutes away.

Moises, responding to queries about the lack of relief operations in the area, said the LGU is focusing efforts on more severely ravaged areas of the city since resources are still scarce.

“We’re unable to take care of everyone since so many are affected. We’re prioritizing areas hit by the flash flood. As you can see, residents of Cabadiangan and nearby areas are receiving an outpouring of food. Here in Barangay 5, not so much, but people have managed because their livelihoods aren’t as affected.”

That may be painful to hear, but it is reality in Sipalay, where the local government does not know when the lights will come on again, which also means water service can’t re-open, and where loss and destruction outstrip resources and capacity.

In Barangay 5, Christmas will be cold and dark, but folks will be in their homes. Thousands of others in the city, huddled in evacuation centers, still wonder when they can start rebuilding their lives. – Rappler.com

Joey Baldonado is an active member of MovePH, the citizen movement art of Rappler, and a volunteer for Kawsa Kusina, an aid network of youth, environmentalists, church workers, and professionals.