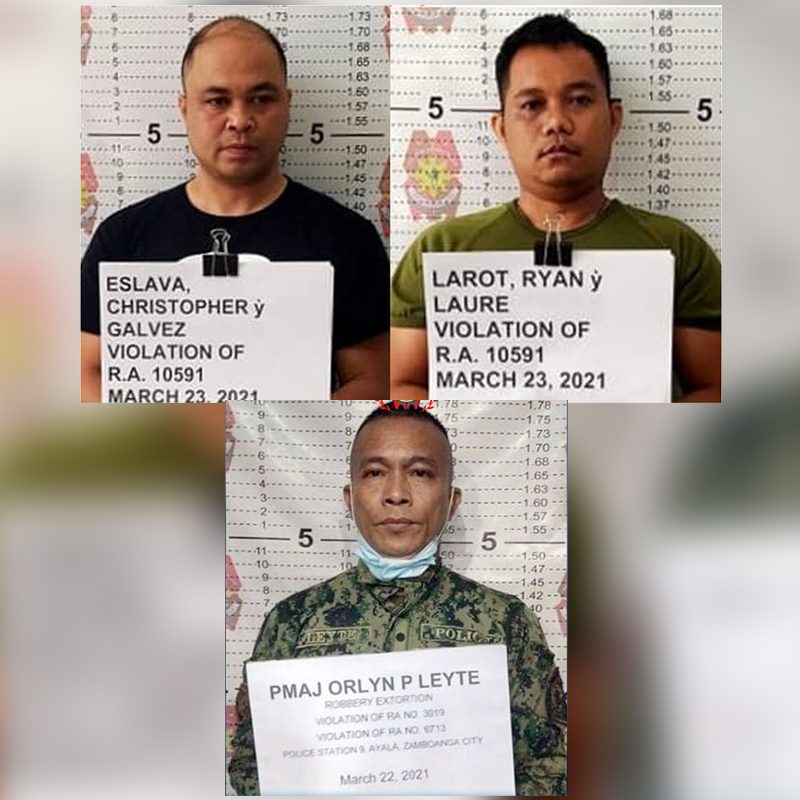 Western Mindanao Command Chief Lieutenant General Corleto Vinluan, Jr said due process will be observed in relation to the arrest of a military officer and a soldier for alleged gun smuggling in Zamboanga Sibugay on Tuesday morning, March 24.

A separate police operation on Monday, March 23, in Zamboanga City also led to the arrest of a police major for extortion.

The two are accused of having committed gun-running and gun-smuggling activities and are temporarily detained at the Ipil Municipal Police Station.

“We do not tolerate any illegal activity perpetrated by anyone from the organization. They are the stains that should be removed to maintain the clean reputation of the Armed Forces of the Philippines,” said Vinluan.

“Nevertheless, the AFP will still conduct our investigation and observe due process. Once proven guilty, the two will subsequently be discharged from the regular service of the Armed Forces of the Philippines and will face the appropriate charges under the rule of law,” he added.

Leyte was arrested after receiving P90,000 – P2,000 of which was tagged with ultraviolet powder and 88 photocopied P1,000 bills meant for entrapment operations – as payment for a settlement against a victim robbed and divested of her jewelries and a week of her store earnings in the guise of a drug bust operation.

Cases of robbery extortion and violations of the Anti-graft and Corrupt Practices Act, as well as the Code of Conduct and Ethical Standard for Public Officials and Employees, are now being prepared against Leyte and 4 other suspects:

The 4 were earlier under restricted custody and detained at the Zamboanga Police Station.

“Once again, this Regional Office would like to make it clear that we do not tolerate any wrongdoings of our personnel either officer or members of the ranks. While we intensify our campaign against illegal drugs and effectively manage all kinds of police operations, we do not want any unscrupulous schemes devised by our personnel to advance their personal interest. We continue to cleanse our ranks in order to improve the best quality of law enforcement service in Zamboanga Peninsula,” Ylagan said. – Rappler.com