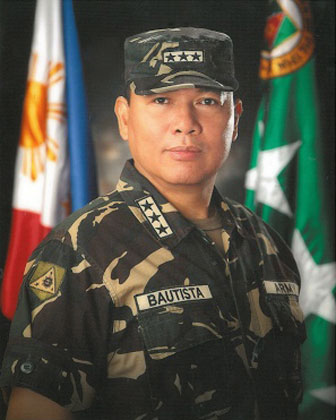 MANILA, Philippines - The general whose father was slain by Muslim rebels more than 3 decades ago is the new chief of staff of the Armed Forces of the Philippines, a senior Palace official told Rappler on Tuesday, January 15.

Lt Gen Emmanuel Bautista, commanding general of the Army, has been promoted to lead the 125,000-strong Philippine military, replacing Gen Jessie Dellosa who will turn 56 on January 20, the mandatory retirement age for the military.

The turnover ceremonies will be held on Thursday, January 17, in Camp Aguinaldo.

De la Cruz was seriously considered, but he did not make an impression when interviewed by the President, an adviser of the President told Rappler.

On Monday, January 14, the President finally made his choice known to Defense Secretary Voltaire Gazmin, according to the same sources who spoke on condition of anonymity. Gazmin, himself a former Army commander, endorsed Bautista. As a young lieutenant, Bautista once served under Gazmin's command in Mindanao.

As was the case when he was named Army chief in November 2011, the 54-year-old Bautista bypassed commanders more senior than him. A 1981 graduate of the Philippine Military Academy, Bautista bested lower batches – PMA Classes 1979 and 1980 – both for the Army command and now the AFP post. He will be retiring in July 2014.

When the President picked him as Army chief in 2011, Bautista was considered by some as too junior for the post.

But he has a life story that resonates with the President. The Army camp in Sulu is named after his slain father, the late Brig. Gen. Teodulfo Bautista.

The older Bautista was killed by members of the Moro National Liberation Front in 1977, when he chose to meet with them – unarmed – in Patikul, Sulu, to discuss a possible ceasefire.

At the time, his son was on his second year at PMA, scheduled to graduate in 1980. But the young Bautista's entire batch was suspended for a year over hazing, thus he graduated in 1981. (He graduated No. 7 in a class of 161.)

The new AFP chief leads a military that is bracing for peacetime, especially with the Moro Islamic Liberation Front, which has signed an initial framework agreement with the government. The government has also resumed peace talks with the communist-led National Democratic Front, although this is a more difficult track.

Bautista helped craft the military's counter-insurgency campaign called Bayanihan. Soft-spoken and wary of the limelight, it will take an effort to persuade him to be media-savvy.

Bautista finished his advanced courses on Scout Ranger and Command and General Staff on top his class. He spent his field commands, as battalion and later brigade commander, in Central Luzon.

Before becoming Army chief, Bautista was commander of the 3rd infantry division in Iloilo. He served as chief of operations of the Armed Forces (J3), where he drafted the "Bayanihan" Internal Peace and Security Plan that focuses on civil-military operations. At one point, he also served as J5 of the Armed Forces, in charge of plans and programs. - Rappler.com