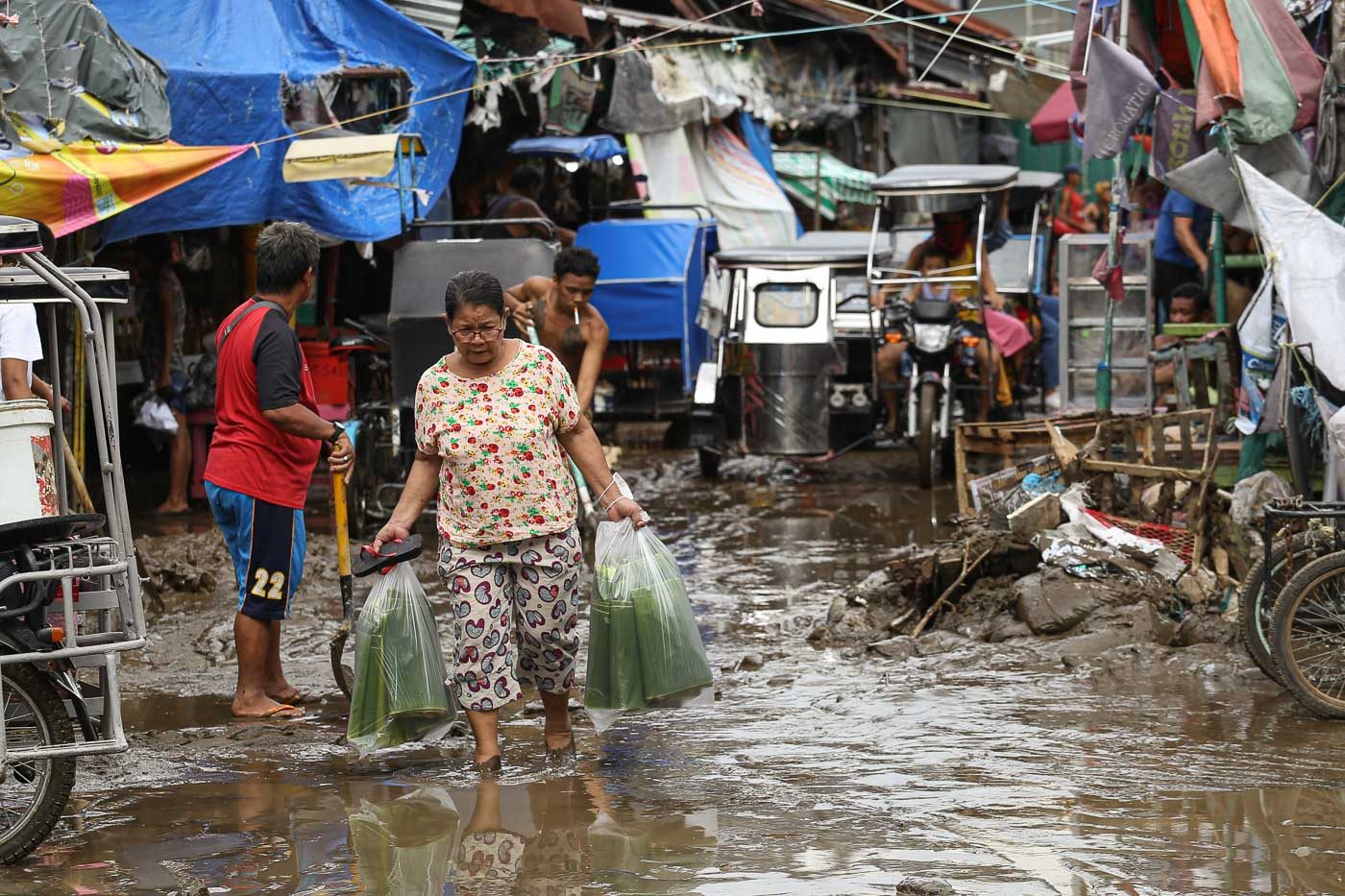 AFTERMATH. Residents wade through a thick mud as they clean their surroundings following a flood caused by Severe Tropical Storm Paeng, in Sta. Rosa City, Laguna on October 30, 2022.

MANILA, Philippines – House Speaker Martin Romualdez said on Sunday, October 30, he fully supported the recommendation made by the National Disaster Risk Reduction and Management Council (NDRRMC) to President Ferdinand Marcos Jr. to declare a national state of calamity for one year in the wake of the devastation caused by Severe Tropical Storm Paeng (Nalgae).

The Speaker said adjustments in the proposed 2023 budget might be possible once the district representatives have assessed the extent of damage in their areas.

In a statement, the President’s cousin noted that reports his office received indicated that most parts of the country were not spared by the storm’s wrath.

“I have requested my fellow members of the House of Representatives to help the executive departments and agencies assess the damage caused by the Severe Tropical Storm Paeng and assist in relief operations in their respective districts,” Romualdez added.

But in a separate statement, House Deputy Majority Leader Janette Garin expressed her reservations towards the proposal of declaring a national state of calamity.

The congresswoman from the 1st District of Iloilo, which was also hit by the storm, said that while such declaration would have positive effects, including the immediate price freeze on basic goods and the easy access to the quick response funds, the government should still be vigilant about releasing funds so that they would not go to waste.

“Perhaps only affected areas should be the subject of NDRRMC’s recommendations, and with safeguards in place to prevent abuse,” Garin said in Filipino. “We need to be vigilant about deciphering needs versus wants.”

“We should be careful in using our funds because Paeng will not be the only calamity that our country might experience. There are the threats of the Mayon Volcano, whose alert level was raised to 2, and Taal Volcano, which is on alert level 1, on top of the threat of earthquakes,” she added.

Marcos said on Saturday, October 29, he would study first the recommendation made by the disaster agency.

The storm triggered landslides and floods in southern Philippines, killing 48 and injuring 40. Those numbers are still expected to rise.

Severe Tropical Storm Paeng has forced the House to rethink budget allocations for 2023 to address the needs of areas hit the worst by the storm.

“I have asked the chairman of the House appropriations committee, Representative Zaldy Co, to compile the damage assessment from House members and executive offices so that they may aid us in reviewing possible adjustments in budget allocation for repair and rehabilitation of affected areas under the proposed 2023 General Appropriations Act,” Romualdez said.

The House has already passed the executive’s proposed P5.268-trillion for 2023, but the Senate is still deliberating the appropriations bill. – Rappler.com