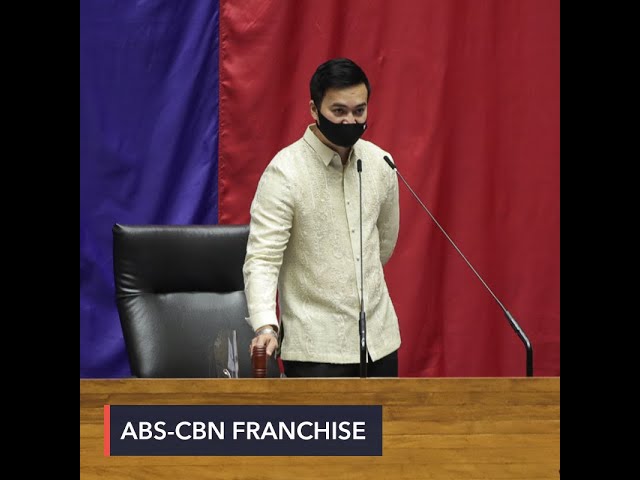 Speaker Lord Allan Velasco has no intention of heeding calls for the House of Representatives to reconsider an earlier decision that denied ABS-CBN its franchise.

“Calls to revive the franchise of ABS-CBN will have to wait until the next Congress,” said Velasco in a statement on Thursday, February 11, dousing hopes the media giant would somehow get a second chance to go an air again before President Rodrigo Duterte steps down in 2022.

By next Congress, Velasco meant the one that will convene in July 2022, two months after the scheduled May 2022 presidential elections.

Velasco said the House would rather focus on other priority measures since there is roughly only a year left before the next polls. The list includes the Marinduque congressman’s proposed Bayanihan to Arise as One Act, the 3rd installment of the Bayanihan law that would set another P420-billion worth of funds to help the country recover from coronavirus pandemic.

“With a little over a year until the 2022 elections, the House of Representatives is bent on finishing the remaining priority measures of this administration to ensure that President Rodrigo Roa Duterte fulfills his campaign promise to the Filipino people,” Velasco said.

The Speaker made this statement 3 days after Duterte declared he would not recognize any franchise granted by Congress to ABS-CBN.

The President repeated allegations that the Lopezes, whose family runs ABS-CBN, had unjustly benefited when the state-owned Development Bank of the Philippines (DBP) allegedly condoned P1.6 billion worth of loans in 2006.

But during a House hearing on January 18, the DBP itself denied that it condoned or wrote off loans of the Lopez Group of Companies back in the early 2000s.

The House committee on legislative franchises had rejected ABS-CBN’s bid for a franchise renewal in July 2020 following Duterte’s sustained threats against the network.

Even before the rejection, ABS-CBN was already ordered to cease its television and radio operations when its 25-year-old franchise expired on May 4, 2020.

Velasco’s statement now makes it clear that the House would not act on Recto’s pending bill.

One of Velasco’s critics in the House had also pushed the Speaker to act on pending measures involving ABS-CBN and the Lopez family.

On January 27, Anakalusugan Representative Mike Defensor – one of ABS-CBN’s main accusers during the franchise hearings last year – asked the plenary to act on pending House Bill (HB) No. 6732 that seeks to give ABS-CBN an interim franchise for 6 months.

Defensor failed to note that HB 6732 was meant to give the now-shutdown ABS-CBN a provisional franchise until October 31, 2020 only.

House committee on legislative franchises chair Franz Alvarez then said that even if the House plenary decides to act on this bill, it would already be “moot and academic.”

Defensor – an ally of Velasco’s rival and ousted speaker Alan Peter Cayetano –  would later deliver another privilege speech on Tuesday, February 9, to push the House to continue probing the alleged DBP loan condonation.

Defensor insisted that lawmakers have evidence against the Lopezes. He then said the Velasco-led House would be going against Duterte’s wishes should they stop investigating the Lopezes.

But Defensor’s remarks were stricken out of the plenary records since the matter is still pending with the House committee on good government and public accountability, which has scheduled a second hearing next Wednesday, February 17. – Rappler.com