MANILA, Philippines - Former President Gloria Macapagal-Arroyo gained freedom from her hospital arrest after the court allowed her on Wednesday, July 26, to post a P1- million bail.

But this does not mean that the electoral sabotage case filed against Arroyo, which caused her detention at the Veterans Memorial Medical Center (VMMC), is over.

Here's an account of how the case has run so far:

October 3 - Norie Unas, provincial administrator of former Maguindanao Gov Datu Andal Ampatuan Sr from 2001-2009, and other 15 election officers from Maguindanao emerge as witnesses in the joint probe by the Commission on Elections (Comelec) and the Department of Justice (DOJ) on alleged poll fraud in the 2004 presidential elections and 2007 senatorial polls.

November 18 - The Comelec en banc votes in favor of the DOJ-Comelec investigation results, and files an electoral sabotage case against Arroyo and accomplices at the Pasay City Regional Trial Court (RTC) Branch 112 under Judge Jesus Mupas.

The court immediately issues a warrant of arrest against Arroyo, who was ready to leave the country for a medical check-up. She is detained at St. Lukes Hospital due to a lingering back illness.

November 24 - The Arroyo camp asks the court if the former president could be placed under house arrest instead of hospital arrest. The court denies the petition.

November 30 - The court orders Arroyo to be transferred from St. Lukes Hospital to the VMMC.

December 6 - Arroyo is transferred to her new detention in VMMC.

January 24 - Comelec asks the court to transfer Arroyo to a regular detention facility since Arroyo's condition is reportedly improving. The court rejects the motion.

January 25 - The court junks the petition filed by the Arroyo camp which seeks to recall the arrest warrant, saying the warrant of arrest "does not touch the issue of guilt of the former president on the electoral sabotage charges."

February 23 - Arroyo appears in court for her arraignment, and pleads not guilty.

March 2 - The Arroyo camp submits its petition to allow the former president to post bail.

March 15 - The first hearing on the petition to bail ends with the lengthy marking of evidences. The prosecution reportedly intended to submit 249 evidentiary exhibits and 42 witnesses, 12 of whom will be presented during the bail hearings.

March 27 - Comelec presents employees Juan Vergel Soriano (records section) and Retzie Villena (human resource management office) in court to identify election documents purportedly showing the tampering of votes. However, they tell the court that they have no knowledge of the alleged tampering of votes in Maguindanao.

May 31 - Comelec fails to present its two witnesses, Unas and Maguindanao elections officer Russam Mabang. Comelec says that Mabang had gone missing after initially agreeing to testify, while Unas has to be protected due to an alleged shoot-to-kill order against him. Judge Mupas orders the termination of the prosecution's presentation of witnesses.

June 1 - Comelec files a motion to allow Unas and Mabang to appear again in court.

June 5 - Comelec announces that Mubang has backed out as witness.

June 14 - Unas appears in court, and testifies that Arroyo had instructed the governor to ensure a 12-0 victory for the administration's 2007 senatorial candidates. He adds that he even accompanied Ampatuan to Malacañang for a dinner meeting with Arroyo a few days before the 2007 elections. 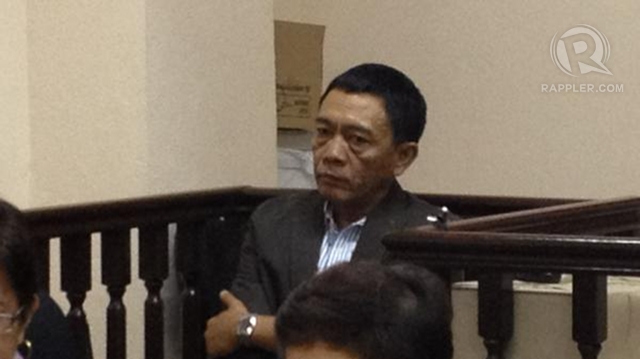