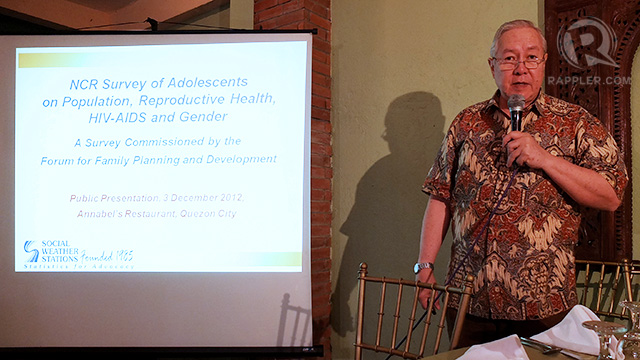 Both houses of Congress are locked in fierce debates on the controversial measure which President Benigno Aquino III wants passed before the Christmas break. Catholic Church bishops are vigorously opposing it, however.

With the May elections fast approaching, stances of senatorial and congressional candidates on the RH bill are expected to play a key part in determining voter preferences.

Filipino youths aged 15 to 24 comprise new voters who have the collective power to determine the elected.

According to the SWS survey, 29% of registered voters in that age group will vote for senatorial candidates who support the RH bill compared to the 6% who will vote for candidates who oppose the bill. However, it was found that 64% of these voters don’t consider the measure when making their vote.

Benjamin de Leon, president of the FFDP, the organization that commissioned the survey, said, “This survey shows that our legislators have nothing to fear about the idle threats of the Catholic church.”

De leon is referring to constant warnings from the church about the “Catholic vote” that can threaten the winnability of pro-RH bill candidates.

Related to this, a majority of 15 to 24 year-olds from NCR and Cebu believe that “the Church interferes in the affairs of the government especially in the issue of reproductive health and family planning.”

Components of the bill

The respondents were also asked about specific components of the RH bill.

In the NCR, 87% believe that the government should provide free supply or service to the poor who wish to use any family planning method. However, they are more divided when it comes to the distribution of condoms, IUD and pills to “people who want to avail of them.” Forty-three per cent agree with distribution while 38% oppose it.

An overwhelming majority, 88%, believe that their provincial or city government should have a policy on reproductive health and family planning. Only 5% disagree.

Current local officials would also do well in heeding the survey which showed that 60%, or a majority, of NCR youths perceive that their mayors are supportive of the RH bill. Sadly, 28% of NCR youths do not know their mayor’s stance on the bill.

Reacting to the findings, Rep. Edcel Lagman, an author of the measure, said: “The congressmen don’t divulge their position on the RH bill. They are scared of their constituents. The youths in their areas are in favor of the bill.”

He called on residents of these districts to get to the bottom of their local official’s stances because he warns that what they project may be different from what they support in the hearings. He also said that televising the hearings may also help to show the lawmakers' “true colors.”

But it was Christopher Porras, secretary-general of the RH Agenda and the only youth in the panel during the presentation, who had the last word.

“The RH Bill is on top of our Christmas wishlist.” - Rappler.com