Sandiganbayan: Why was Arroyo released? 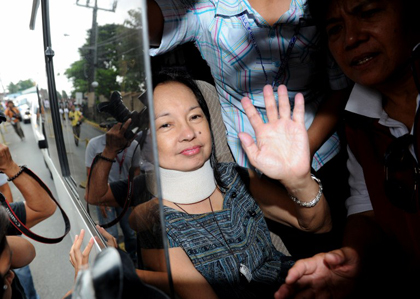 MANILA, Philippines - The Sandiganbayan's legal division said former President Gloria Macapagal-Arroyo should have remained in detention at the Veterans Memorial Medical Center (VMMC) despite the grant of bail in her poll fraud case by the Pasay Regional Trial Court.

Sandiganbayan spokesperson Renato Bocar said on Wednesday, July 25, that the graft court’s legal division head, Atty. Ruth Ferrer, has issued an opinion that Arroyo should not have been released from hospital arrest pending a plunder charge filed against her by the Office of the Ombudsman last July 16.

The first hearing on the case will be held at the Sandiganbayan's first division on Thursday, July 26, at 8.30 a.m.

Mrs Arroyo is now at the Arroyo residence in La Vista, Quezon City, after a Pasay court signed her release order at 1 p.m. Wednesday. The former president left VMMC shortly past 3 p.m., ending 8 months of detention.

Pasay Regional Trial Court 112 Judge Jesus Mupas granted her bail because "the court believes that the prosecution failed to establish with the required quantum of proof, that conspiracy exists on the part of accused Arroyo." The Commission on Elections (Comelec) charged Arroyo with electoral sabotage for allegedly conspiring with local officials to ensure an administration victory in the 2007 senatorial elections.

The Sandiganbayan case, however, concerns alleged fraud in the handling of P366-M confidential and intelligence funds of the Philippine Charity Sweepstakes Office (PCSO) from 2008 to 2010. It was filed by the Ombudsman last July 16.

“According to our chief of legal division, there is sufficient legal basis to continue detention of the accused former President because she is facing another criminal charge before this court,” Bocar said.

The opinion was based on the "pro-forma" wording of the release order dictating that Arroyo maybe released “unless she is being held for another charge or lawful cause,” which does not make a qualification whether or not a warrant of arrest has been issued.

Bocar however admitted he had reservations about preventing Arroyo’s release because the Sandiganbayan's first division, where the plunder case was lodged, has yet to issue an arrest warrant against her.

“The detention officer will not be violating any procedure (with Arroyo’s release) but if only as a matter of courtesy, he should have asked the Sandiganbayan,” he said.

Copies of the hold order and notices of hearings issued by the Sandiganbayan were furnished Arroyo at the VMMC so her custodial officers are deemed duly notified of the pending criminal charges against her at the graft court.

Meanwhile, Bocar said Arroyo and her 9 co-accused will present their arguments on Thursday as they seek suspension of plunder proceedings concerning.

Bocar said the defendants have also asked the court to defer the issuance of arrest warrants against them that would otherwise mean their detention for the duration of the trial since plunder, a capital offense, is non-bailable.

Several others are also seeking leave of court to file motions for reconsideration to the resolution of the Ombudsman finding sufficient basis for their indictment for plunder.

Defendants claimed the case was filed prematurely since the information was lodged in the Sandiganbayan without giving them an opportunity to file a motion for reconsideration.

Arroyo, through lawyer Anacleto Diaz, said she only received an official copy of the Ombudsman ruling last July 20 – four days after the case was filed in court.

The defense challenged the basis for the case and said the Ombudsman relied on “mere suspicions, surmises, and conjectures” since there was no evidence of design or intent on her part to exploit the procedures in the release of PCSO confidential/intelligence funds (CIF).

Diaz also argued that Arroyo was not the final authority for the release of the PCSO funds.

“GMA’s approval of the requests for CIF were subsequently acted upon by the PCSO Board and the appropriate officers of PCSO who certified to the availability of funds,…released and disbursed the CIF, and finally, submitted their liquidation to the COA – all in accordance with the rules of good corporate governance,” the defense lawyer said.

Diaz questioned the absence of any proof that the money ended up in Arroyo’s pockets despite the allegation that she and the other defendants unlawfully enriched themselves from the PCSO funds.

“The assailed Resolution of the Honorable Office failed to cite any evidence at all that respondent GMA received cash advances or any part of subject CIF of PCSO or that she diverted its use for any purpose,” he stressed. - Rappler.com