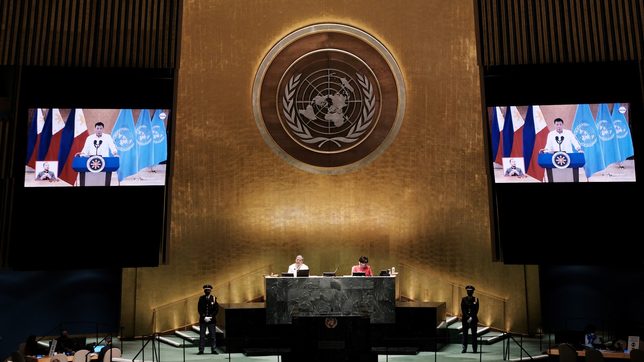 DUTERTE ADDRESSES THE UN. Philippine President Rodrigo Duterte speaks remotely during the 76th Session of the General Assembly at the UN headquarters in New York on September 21, 2021.

Facebook Twitter Copy URL
Copied
UN spokesman Stephane Dujarric responds to President Rodrigo Duterte's latest tirades against the global organization, which the Philippine leader described as 'inadequate' and a 'product of an era long past'

United Nations spokesman Stephane Dujarric reminded Philippine President Rodrigo Duterte that the UN is only “as strong and as effective” as member-countries want it to be.

Dujarric made the statement when asked by Rappler past 1 am (Manila time) on Saturday, September 25, to comment on Duterte’s latest tirades against the UN.

“Well, you know, as we’ve always said, the UN is as strong and as effective as its member-states want it to be and will it to be,” Dujarric said in his brief response.

The tough-talking Duterte had doubled down on his criticism of the UN in a pre-recorded speech before the General Assembly on Wednesday, September 22.

He issued a warning against any UN interference into his brutal war on drugs, now the subject of an investigation of the International Criminal Court (ICC), a body separate from the UN.

Duterte called the UN “inadequate” and a “product of an era long past.” He also slammed the Security Council, the pinnacle of the UN structure, for being “neither democratic nor transparent in its representation and processes.”

Duterte’s rants against the UN did not come as a surprise as the Philippine leader has been often criticized for his parochial view of global affairs.

Duterte has belittled and even threatened the UN in the past, particularly then-UN secretary general Ban Ki-moon over criticisms of his violent drug war and other human rights abuses in the country.

Asked if the UN would now consider a thorough investigation of Duterte’s anti-drugs campaign, Dujarric said that the UN has “seen” the decision of the ICC, but noted that it is a body independent of the United Nations.

Human rights advocates have long slammed the UN Human Rights Council for only offering “technical assistance” to the Duterte government accused of widespread human rights violations. They argued that the UN body could have considered a full investigation into these violations instead.

The Philippine Drug Enforcement Agency reported that there were 6,181 persons who died during the government’s anti-drug operations as of July 31, 2021, or over five years since Duterte became president.

Data obtained by Rappler, however, showed that there were 7,884 drug suspects killed by police from the time Duterte assumed office on June 30, 2016, to August 31, 2020. This does not include the estimated 27,000 vigilante killings outside of police operations, according to human rights groups. – Rappler.com