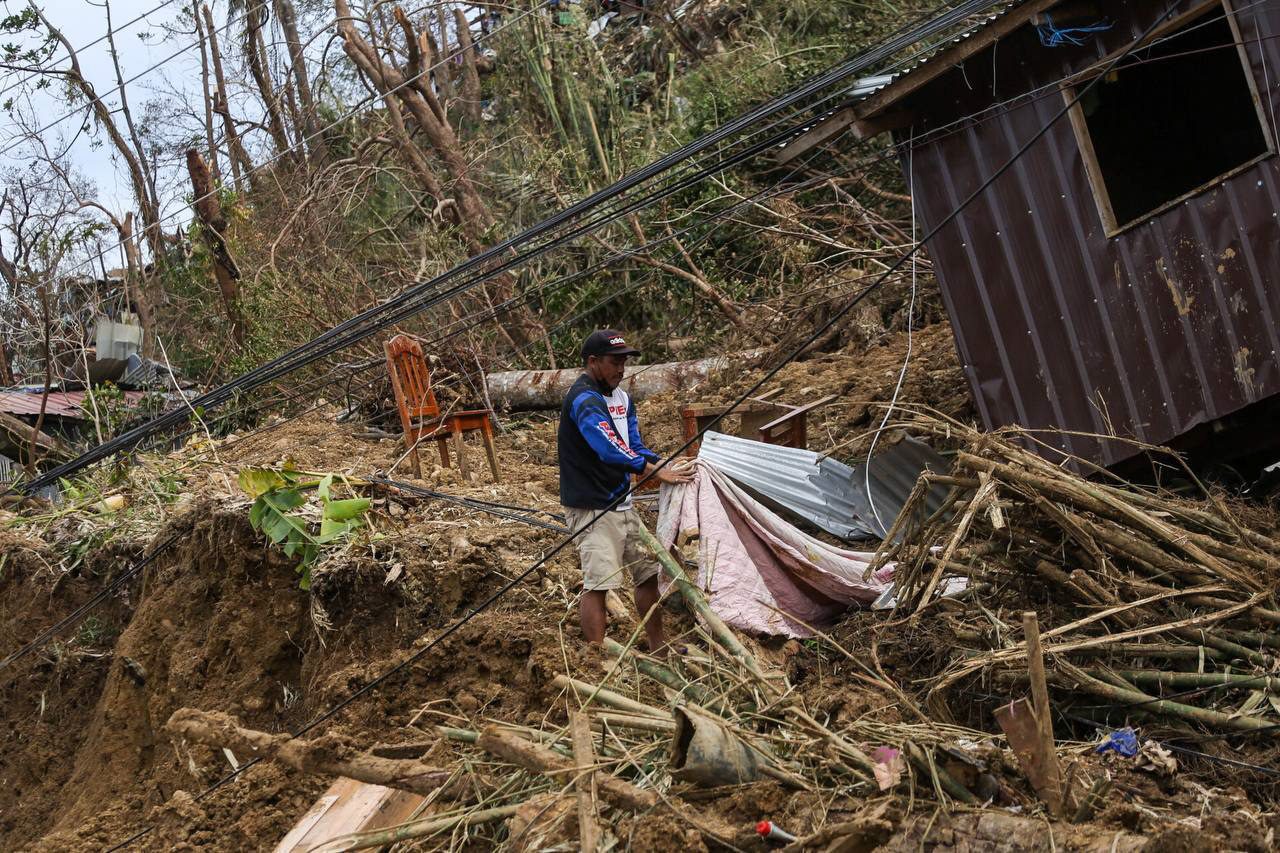 ODETTE DEVASTATES SURIGAO CITY. Senator Kiko Pangilinan, who arrived on 21 December 2021, appeals for more fuel supply and for power, telecommunications, and banking services to be restored so that residents can start rebuilding their lives.

Facebook Twitter Copy URL
Copied
One student said that though he was thankful that he and his family were physically okay, the calamity had instead taken a toll on their mental health

MANILA, Philippines – As universities wrapped up the semester, students nationwide marked their calendars for a momentary exit from their academic responsibilities in time for the 2021 Christmas holidays.

However, this was not the case for students of Surigao City as the onslaught of super typhoon Odette drove them to leave their homes. For these youngsters and the thousands of other students subjected to Odette’s wrath, the supposed weeks-long break turned into a nightmare that came in the heels of widespread displacement.

With over 89,282 families displaced and 532,096 homes damaged in its wake, Typhoon Rai, locally known as “Odette,” affected over 7.8 million people across 11 regions in the Philippines when it made landfall over nine times last December 16-17, 2021.

The Caraga region was one of those that bore the brunt of the typhoon’s wrath with Odette severely affecting all five of its constituent provinces.

The droves of students leaving Surigao City and other Odette-stricken municipalities in search of the stability demanded by online education was comparable to the kind of exodus only heard of in works of fiction.

Joshua Ravelo, a first year Information Technology student, shared what steps he had to take as he faced the calamity’s aftermath.

“My education was greatly hampered by super typhoon Odette because there was no wifi or even a stable connection to the internet. I was forced to relocate outside of Surigao as soon as possible because classes were starting soon. Adjusting to it was one of the most difficult parts of my life because you have to force yourself to be okay like nothing happened,” he said.

Though he was thankful that he and his family were physically okay, he said the calamity had instead taken a toll on their mental health.

Joss Ecleo, a Computer Science freshman, recounted how he dealt with having to study after the super typhoon damaged his family’s home in Surigao City.

“Having to commit to studying again and acting like a super typhoon didn’t just blow down our house made me a tad bit unstable. On one side, I didn’t want to have to forget about the responsibilities I have in school, but in the other, I couldn’t help but feel forced to put up this facade that everything was okay, when I knew in myself that it really wasn’t,” he said.

He said his school’s push to continue the 2nd semester despite the calamity’s aftermath especially took a toll on him.

“I can’t help but think about how I almost had to fast-forward my coping process because of schools continuing to push through with the 2nd semester.”

Jonathan*, a first year Civil Engineering student, detailed his attempts to keep up with academic demands after the typhoon.

(Before the typhoon, everything was okay. But after it happened, things went crazy because I missed so much lessons. I felt like all my grades would plummet, I even failed my Integral Calculus class. A lot of students failed because of how difficult things had become. Because of the typhoon, my time was spent catching up with requirements instead of studying.)

Amid a power interruption that had lasted months, cellular reception in Jonathan’s area in Surigao City had only been restored just February this year.

(The signal at our house became okay by around the last week of February. That’s when I was able to catch up. The affected students had requested for a mental health break, but it wasn’t approved because it would apparently disrupt the schedule.)

Patrick Pospia, a Political Science freshman, said he was greeted by the typhoon as he was preparing for their final examinations.

“Super typhoon Odette came at a time when we were just about to have our first semestral finals. So it set our academic schedule back for a good month or two. Thankfully, our university is very understanding.  If online classes weren’t bad enough, the onset of the super typhoon further decreased my already lacking interest in all things academic related,” he said.

Joss, Joshua, Jonathan, and Patrick were only few of the untold number of students who had to leave Surigao City and other Odette-stricken municipalities in search for the stability demanded by online learning.

This involuntary exodus has afflicted not only the student population, but also the 1,811,193 affected families from 38 provinces all over the Philippines who continue to suffer displacement due to the massive destruction left by super typhoon Odette.

The Ateneo de Davao University (ADDU) College Guidance Center said it continues to offer “kamustahan activities” where counselors reach out to students individually. They say this way, special circumstances like calamities and its effects on the students may be identified and further addressed.

“The ADDU College Guidance Center  as  a service office of the university  continues to render its services to students affected or not by Typhoon Odette. The services offered  during the pandemic are online counseling, consultation, group guidance, career guidance, in-house and out-house referral,” the office says.

As guidelines for the expansion of face-to-face classes continue to be developed amid the gradual easing of pandemic restrictions in the country, students are left wondering whether they will be uprooted anew. This time from the online learning mode they had abruptly been subject to at the beginning of the pandemic to the new terrain of blended learning.

The Commission on Higher Education is expecting more Higher Education Institutions to resume in-person classes beginning next school year. Of the 1,975 HEIs nationwide, only 313 schools have started offering face-to-face classes at the tertiary level.

Whether this return to in-person classes would succeed or not will greatly depend on how the students, educators, and parents will fare in face-to-face learning as the country, along with the rest of the world, continue to grapple with the pandemic. – Mark Carlota/Rappler.com