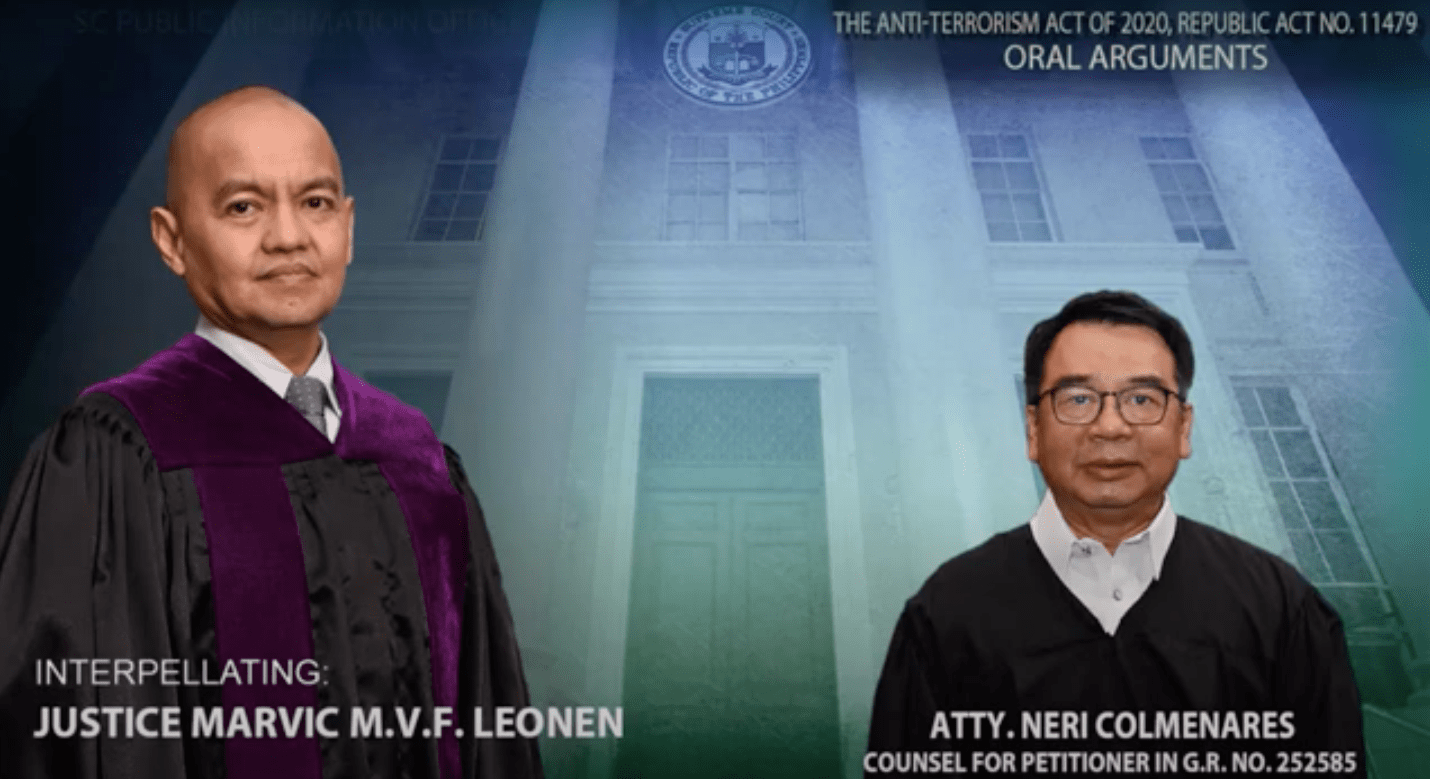 Safeguards in the feared anti-terror law will be pointless because of its language, petitioners told the Supreme Court as oral arguments further heated up on Day 2, Tuesday, February 10.

Leftist lawyer Neri Colmenares argued that even if there is an extraordinary writ of habeas corpus – a remedy against illegal detention – courts were bound to dismiss it because of the law’s language.

Section 29 of the law allows law enforcers to arrest suspects without court-issued warrants – only authorization from the anti-terror council – and to detain them for as long as 24 days. Activists usually use the writ of habeas corpus whenever they are arrested without warrants.

In a heated exchange, Associate Justice Marvic Leonen said the right to file a habeas corpus petition “is not removed.”

“Filing itself (is still a right), but the effectiveness of the remedy is already removed…. The title of the provision, your honor, is detention without judicial warrant so the court will say, ‘Well that is valid under the law, that you can be detained for 24 days without judicial warrant,'” said Colmenares, forced to talk over the justice sometimes to finish his sentence.

“You are telling us that when they file a petition for habeas corpus, we will certainly dismiss it? You know better than Manila Times the result of the action of the Court?” Leonen said, a dig at the newspaper over its reports on leaks from the Supreme Court.

“You do not sit on the bench. Part of the way we can clarify is it’s possible to file a petition for habeas corpus and when a petition is filed, it is up to the Court to attend at that moment to see whether the 3 days or 14 days will apply,” Leonen said.

Leonen said 3 days because under the Constitution, in the gravest of situations, as when the country is under martial law, the longest period that people can be detained without a court warrant is 3 days. Petitioners have been saying that the 24-day provision in the anti-terror law violates the Constitution.

During Day 1 of oral arguments, University of the Philippines (UP) professor John Molo said the option to file a petition for habeas corpus is now just an illusion under the law.

“We are delving into the fact that judicial remedy, while it is available still, is no longer effective under this law. It remains law, but as a practical matter –” Molo began to say, when he was cut by Associate Justice Rosmari Carandang who told him to explain it in his written memorandum.

During the Duterte presidency, activists and allies alike have lost petitions for habeas corpus and even other extraordinary writs like amparo and habeas data, some from lack of jurisprudence, and others due to a Supreme Court decision that limits the scope of the writ. (PODCAST: Law of Duterte Land: Are extraordinary writs still effective in the time of Duterte?)

Associate Justice Ramon Paul Hernando then quizzed human rights lawyer Chel Diokno on designation, a distinct power of the Anti-Terrorism Council to designate persons or groups as terrorists based only on its own hearings, without a court trial.

Hernando said designation is only for the purpose of freezing assets, and not for conducting arrests. The designation clause, Section 25, says the Anti-Money Laundering Council (AMLC) will freeze the assets ot persons or groups designated as terrorists. This was also the justification of the Department of Justice (DOJ), which drafted the Implementing Rules and Regulations (IRR).

But Diokno pointed out that the arrest provision under Section 29 refers to those “suspected of committing” a terror act.

“Section 29 is broad enough to include a person designated by the anti-terror council because it makes reference to a person suspected of committing, and when one has been designated by the anti-terror council, I believe that would give rise to an inference that he is committing a terrorist act, therefore it would give authority to law enforcers to effect an arrest,” Diokno said.

“It would appear to be so based on the wording of Section 29,” Diokno said.

Under the old Human Security Act, the government must pay acquitted suspects P500,000 for each day in jail. That provision scared law enforcers that they barely filed any terrorism case under that law.

The amended anti-terror law removed the provision, which petitioners said took away the right to compensation.

Associate Justice Alexander Gesmundo said that suspects can still sue for damages under Article 35 of the Civil Code, the law on compensation for wrongful charges.

Moro lawyer Algamar Latiph said it won’t be the same, as suing for damages under the Civil Code requires a new string of litigation.

“(In the old provision), the only proof required to a person is that he is acquitted,” Latiph said.

Oral arguments will resume on February 16, where Solicitor General Jose Calida is expected to be interpellated.

Chief Justice Diosdado Peralta has reminded lawyers and petitioners not to discuss the case to the media. – Rappler.com

Here are stories from Day 1 of the oral arguments: