IT'S A WRAP. Supreme Court concludes oral arguments on the contentious anti-terror law after 9 sessions in the course of 4 months.

After nine days of sessions in the course of 4 months, petitioners are not bringing home an injunction against the anti-terror law, but instead a show cause order against one of their own.

“The court also resolved that a show cause order be issued to Attorney Ted Te for his statement post-hearing last time which was posted in the social media,” Chief Justice Alexander Gesmundo said at the beginning of the short session on the 9th and final day of oral arguments on Monday, May 17.

A show cause order will require Te, who is both a counsel and petitioner, to explain his tweets and essentially argue why he should not be cited in contempt of court. There is a gag order by the Supreme Court prohibiting involved lawyers from discussing the case.

Te had tweeted after Day 8 on May 12 how “ironic” it was for the High Tribunal to allow National Security Adviser Hermogenes Esperon Jr to red-tag progressive groups in open court, when in the same hearing, the justices asked whether the situation in the country was reminiscent of McCarthyism.

That period in American history in the 50s was characterized by a communist witch hunt spearheaded by American senator Joseph McCarthy.

Te deleted the tweets a while after, recognizing the gag.

Te’s sentiments were later reflected in a joint motion officially filed before the Supreme Court on May 14, asking Esperon’s testimony to be stricken off the records, and for him to no longer to be called back. Petitioners got one of those.

Esperon was supposed to be further interpellated by the Court on Monday, but Gesmundo said “the Court also decided not to continue the interpellation of Secretary Esperon based on the compliance they submitted earlier.”

Rappler learned that the compliance being referred to included Esperon’s additional videos and additional claims against the Communist Party of the Philippines-New People’s Army (CPP-NPA).

On the request to expunge Esperon’s May 14 testimony, Gesmundo said the Court has ordered the Office of the Solicitor General (OSG) to comment. 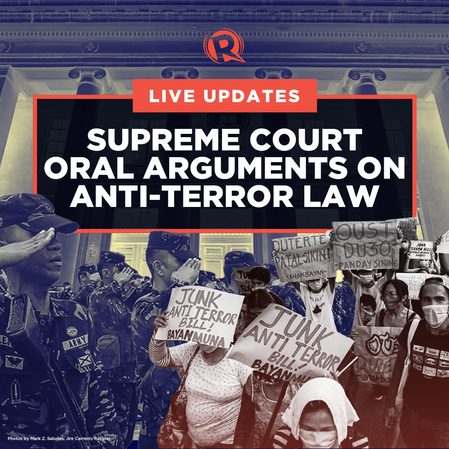 The Supreme Court also merely required the OSG to comment on a May 12 motion by the petitioner group of Gabriela, which had wanted to reprimand Solicitor General Jose Calida for red-tagging.

“[Gabriela] strongly denounces the assailed statement made by the Solicitor General and humbly moves that the Honorable Court reprimands the Solicitor General or any one acting for and on his behalf for red-tagging and/or terrorist-tagging Petitioners and Counsel,” said the motion submitted on May 12.

These were the actions taken during a special en banc held on Monday, short of the action that petitioners had been waiting for, for 10 months already – resolve the requests for an injunction or a temporary restraining order (TRO).

Although resolving the prayers for TRO sounded like an urgent matter for the Supreme Court during Day 3 on February 16, the refiled requests were consequently stuck in Calida’s repeated motions for extension.

Another unresolved matter for the petitioners is Lieutenant General Antonio Parlade Jr, spokesperson of the notorious National Task Force to End Local Communist Armed Conflict (NTF-ELCAC), who had threatened on Facebook not only petitioners, but also a journalist covering the case.

The OSG had explained that Parlade’s Facebook posts were done in his personal capacity, although Associate Justice Amy Lazaro Javier had asked during Day 7: “Is this spokesperson allowed to voice his personal opinion on matters specifically relating to national security?”

The OSG deferred to Esperon, but it was a question that they never got to ask in open court.

While Parlade is not a respondent in the petitions, an earlier manifestation by the group of retired senior justice Antonio Carpio pointed out that the lieutenant general “reports to the respondents in these consolidated cases,” meaning, Esperon and Defense Secretary Delfin Lorenzana.

The 37 groups of petitioners were given 30 days to submit their final position papers, which the Court had limited to only 6, as the petitioners had already been clustered into 6 topics. After the memoranda are submitted, the case is deemed submitted for decision.

The feared law has been in effect for 10 months now. Two Aetas have been charged, jailed and put on trial for terrorism, and 19 people – including a recently freed peace consultant – have been designated terrorists under one of the law’s most contentious arbitrary powers.