MANILA, Philippines - Let us work together to bring joy and freedom to others.

This was the message of Archbishop Luis Antonio Tagle to the archdiocese of Manila, during the Chrism Mass held at the San Fernando de Dilao Parish on Holy Thursday, April 5. It was Tagle's first Chrism Mass as Archbishop of Manila.

Priests, nuns, laypeople and the religious flocked to the church in Paco, Manila to celebrate the special mass that is traditionally held on Holy Thursday morning.

The annual Chrism Mass manifests the unity of the priests with their bishop, and calls for the deacons and priests to renew their vow of obedience to the local bishop, as well as their promise to serve the people in their parish.

It is also where the bishop blesses the holy oils used all year. These include the oil of catechumens, the oil of the infirm, and holy chrism — used by the priests in their respective parishes to administer the sacraments throughout the diocese.

This emphasizes the message of unity -- as the whole archdiocese uses the same oil to anoint the people of Manila.

The Chrism Mass is also meant to remind both priests and Catholics of their oneness in Christ through baptism and holy anointing.

During his homily, Tagle reminded priests of their duty to bring joy and freedom to those around them — but emphasized that the mission was not limited to those in the priesthood but extended to all those baptized by the Holy Spirit.

Once anointed in baptism, he said, all are united as a community to become "priestly people that will minister to the Lord."

"Holiness is not just for a few, there is a universal calling for the holy," he said. "To the baptized, please don't think that being holy is only for the nuns, the priests or the intensely religious. Holiness is not just for the nuns and the priests. It is for all baptized, for all whose life he offered for….Offer your life to fulfill the will of God, to bring joy and freedom," he added in Filipino. 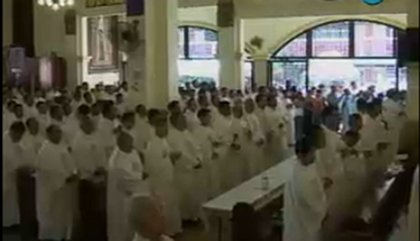 Tagle also reminded those in attendance that both the priests and the people had a duty to awaken each other.

Should they ever be in need, be ill, or in search of the sacraments, Tagle asked that they call on priests so their service may be awakened. The same way, he said, it is the duty of priests to awaken the holiness and priesthood in all those who have been baptized by the church.

"Let us not waste our participation in the priesthood of Christ, the cost of his offering of life. It is not by a diminishable amount that we have received the holy spirit," he told the priests.

He then addressed the whole church.

"[But it is a] mutual awakening. And in our awakening, the power of the Holy Spirit that has anointed us all in Christ, will be felt more vigorously by our people," he said in Filipino.

Tagle also asked for forgiveness from the people who feel they have been hurt or disappointed by priests, and urged priests to forgive each other for any wrongdoings among themselves.

In a light moment, he encouraged mass attendees to collectively tell the priests they loved them, a request they enthusiastically complied with. A more reserved response was heard from priests, who shyly replied, "We love you too," following Tagle's lead.

The smiling archbishop added that the most important offering for both the baptized and those in the priesthood is their commitment and their selves.

"The priesthood of Christ is the offering of self, not the offering of substitute gifts," he said. "In a fiesta, many people offer things -- vegetables, mamon, cake, live chicken. But do they offer themselves? Or do we go back to 'I've offered vegetables, that's enough. Thats a substitute. I do not need to offer myself.'"

"The priesthood of Christ does not need those offerings," he said in Filipino.

Tagle summarized his message by ending with an appeal. "Let us work together so that the whole archdiocese of Manila, the whole country, and even the whole of Asia, through us, through our little ways, may find the joy that all the anointed should bring, and could experience the freedom and liberation that people are longing for."

The holy affair, which Tagle called "very important and very special," was a sea of white as priests and nuns donned their religious ivory garb.

The mass, whose readings were dictated in alternate Filipino and English, was punctuated by a glorious choir assisted by a melodic organ and drums.

In his sermon, Tagle explained that the tradition of the Chrism mass originates from the 4th century when Presbiters were delegated to anoint the newly baptized at the Easter Vigil. Only bishops could bless the oils, thus when Presbiters were asked to do it, they gathered in the last mass before the Easter Triduum, and the oils were sent to the priest who could then go to different parishes to anoint the newly baptized.

The same practice of gathering during the Chrism Mass around the bishop, who blesses the oil, is the tradition that still persists today.

This was Tagle's first time to preside over a Chrism Mass, having been appointed archbishop of Manila only in December.

Cardinal Gaudencio Rosales, who preceded Tagle, was likewise present during the celebration. The presence of the former Archbishop of Manila was acknowledged by the smiling Tagle who told Rosales before the formal start of the Mass, "Babalik ka rin." - Rappler.com