FLOODED. Public school teacher Mylene Ambrocio conducts class at a flooded school due to high tide, during the first day of in-person classes, in Macabebe, Pampanga on August 22, 2022. 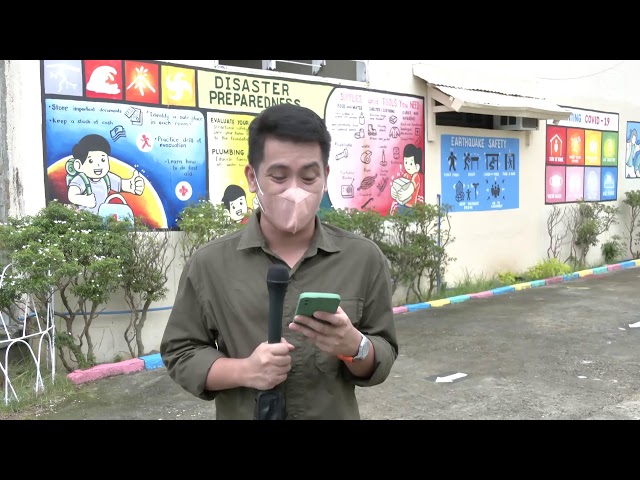 MANILA, Philippines – After two years of school lockdowns, classrooms in the Philippines reopened their doors to welcome millions of Filipino students who suffered learning losses brought by the COVID-19 pandemic.

At the Dinalupihan Elementary School (DES) in Bataan, Rappler met 50-year-old Roldan Reyes, whose two children returned to face-to-face classes on Monday. He told Rappler that his children were excited about their return to school because they would be able to meet their friends again.

In preparation for school opening day, Reyes said his children participated in the school’s dry runs to familiarize themselves with face-to-face learning.

Vice President and Education Secretary Sara Duterte visited DES because, according to her spokesperson Michael Poa, she wanted to visit a school outside Metro Manila, and that Bataan – 128 kilometers from the capital region – is known for its best practices for public schools.

DES, with a population of over 1,500 students, is implementing five days of in-person classes this school year. School principal Jane Robles told Rappler that the school made sure physical distancing in classrooms would still be observed.

At DES, students go through temperature checks before entering the school premises. There are also handwashing facilities positioned per school building and ample space for students to roam around outside their classrooms.

However, this is not the case for most schools here in the country, espececially in overcrowded classrooms in Metro Manila. @rapplerdotcom pic.twitter.com/v5AxWfKt3a

While DES showed it was prepared for the return of its students, this was not the case in some areas in the country, such as Metro Manila and Pampanga, where there were reports of overcrowding and flooding, respectively.

In an earlier press briefing, Poa said that some schools in Calabarzon and Metro Manila would implement class shifting as a quick fix for classroom shortage. Some would also conduct classes in covered courts to avoid overcrowding in classrooms.

Classroom shortages have been a problem even before the pandemic, with some schools packing 50 to 60 students into one classroom supposedly meant for only 40. To make up for the lack of classrooms, class shifting has been implemented to accommodate enrollees every year. (READ: Classroom shortages greet teachers, students in opening of classes)

In Pampanga, a school in Macabebe was submerged due to high tide worsened by heavy rains.

The school opening day was also rainy in some areas of Luzon due to severe tropical storm Florita, prompting class suspensions.

Based on DepEd data, the Philippines lacks 91,000 classrooms for this school year. Poa said that a total of P86.9 billion was earmarked in the 2023 budget for classroom construction.

Despite issues that marred school opening, Duterte declared the first day of school as a celebration of victory against COVID-19.

“We can no longer make the COVID-19 pandemic as an excuse to keep our children from their schools. The Philippines has been reopening just like the rest of the world has reopened,” she said.

The Vice President also said that classroom shortage should not be an excuse to delay the class opening.

“We cannot make the lack of educational infrastructure or the inadequate number of classrooms in certain provinces another excuse to keep our children from schools,” Duterte said. 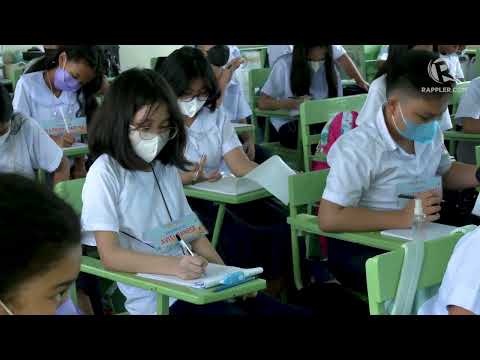 During her visit to DES, she met with students and took selfies with teachers, drawing flak from critics. They said the education secretary should have visited overcrowded schools in Metro Manila instead and seen for herself the situation there.

In a statement on Monday, Senator Grace Poe said that the Philippines “could have been prepared” for the school opening.

“When we asked our students to return to classes amid the pandemic, all systems should have been in place to ensure that public utility vehicles are available, traffic flow is manned efficiently, and health protocols are observed,” she said.

“Our students deserve a safe and comfortable experience as they brave going back to school amid the lingering pandemic,” Poe added.

Meanwhile, Senator Sherwin Gatchalian urged parents to get their children vaccinated against COVID-19.

“Let’s come up with innovative ways, partner with the DOH (Department of Health) and local government units, see if we can set up vaccination sites in schools, and encourage more children to get their vaccines,” Gatchalian said. The DOH earlier said that over 3,000 vaccination sites have been set up in schools.

Studies showed students were “learning less” under the distance learning setup. Experts and lawmakers were alarmed by the learning losses brought by the pandemic, while a World Bank report said 9 in 10 Filipino students aged 10 struggle to read simple text.

Experts and advocates saw Monday’s return to face-to-face classes as a first step to education crisis recovery. – with reports from Almira Coleen and Ashley dela Vega/Rappler.com