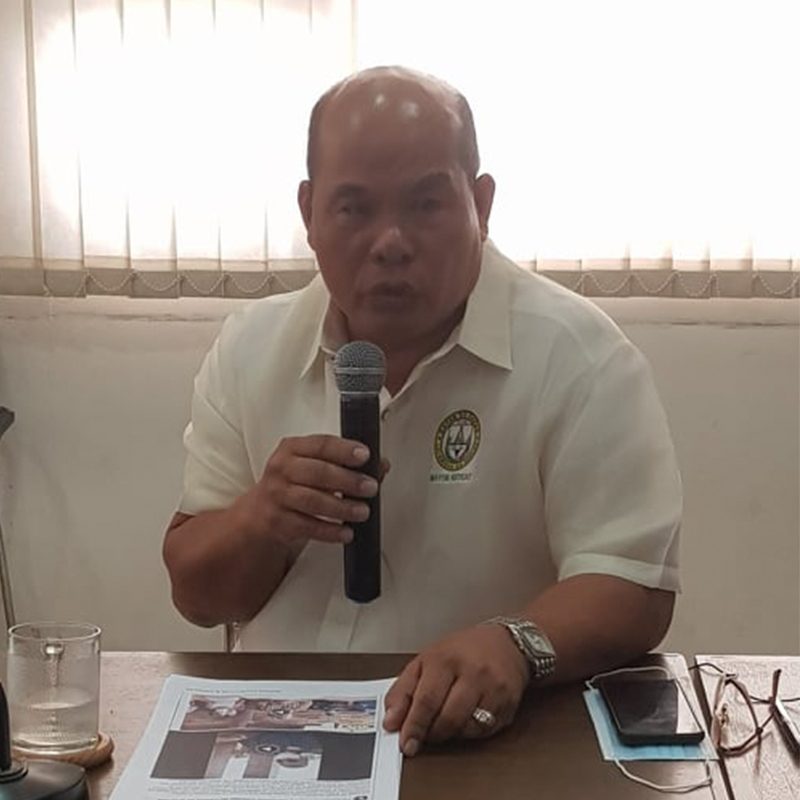 Capas, Tarlac Mayor Reynaldo Catacutan speaks to members of the media during a press conference at the Audio-Visual Room of the municipal hall.

Photo by Jun A. Malig

Facebook Twitter Copy URL
Copied
While a farmer says Tarlac Mayor Reynaldo Catacutan is trying to take his land, the mayor counters by saying the farmer is claiming more land than was awarded to him by the government

The mayor of Capas here charged the former Central Luzon coordinator of the Volunteers Against Crime and Corruption (VACC) and two other persons with cyber libel for Facebook videos and posts allegedly imputing the elected official was a land grabber and had been harassing farmers in the rural areas of town.

In a press conference at the Capas Municipal Hall on Monday, March 15, Mayor Reynaldo Catacutan showed to the members of the media the videos and posts by Pyra Lucas on her Facebook page and on the “Pyra Lucas Kasangga Mo Kakampi Mo in Action” Facebook page. He described the posts and videos as maligning his person and reputation.

Catacutan provided newsmen a copy of the complaint-affidavit he and Retired Colonel Redentor Garcia, head of the municipal government task force, filed against Lucas, farmer Froilan Apostol, and one Cesario Bautista Jr at the Tarlac Provincial Prosecutor’s Office on March 4.

In the complaint, Catacutan and Garcia said Lucas posted a 17-minute video on her Facebook page.

Catacutan, reportedly with the help of Garcia, tried to scare them into giving up the land they own. The post called the reported actions a form of harassment and intimidation, and of terrorizing land owners, and called on Catacutan to give his side.

Catacutan said the accusations made by Lucas and Apostol against him contained malicious imputations of crime, vice, and defect meant to purposely malign and assassinate his character.

“Clearly, Froilan Apostol’s assertion that I am a land grabber and that I ordered law enforcers to prevent him from exercising his rights over his land is an outright lie, which was maliciously uttered to destroy my reputation,” the mayor said.

Catacutan added Lucas “willfully concluded and imputed” during the interview that Catacutan was terrorizing or otherwise harassing Apostol, with “reckless disregard on whether the allegations by Apostol were true or not.”

Garcia included Bautista in the the legal complaint for allegedly arranging the meeting between Lucas and Apostol and for providing the venue for the interview.

Rappler sought Lucas’ comments on the charges filed against them. As of press time, she has yet to respond to the messages sent to her via text and Facebook Messenger.

An issue of awarded land

Catacutan said the Capas municipal government, in coordination with the Department of Education (DepEd) and the Technical Education and Skills Development Authority (TESDA), is reacquiring several hectares of government-owned land in Barangay Cristo Rey to develop and construct the following:

The mayor explained the area was within the 372 hectares of land which were formerly part of Barangays Aranguren and Lawy. These were leased to the United States government in 1946 under the RP-US Military Agreement which became known as Camp O’Donnell.

After the American forces left their military bases in the Philippines and after the eruption of Mt. Pinatubo volcano in 1991, then President Corazon Aquino issued Proclamation 813 titled: “Reserving the Resettlement Site purposes of Mount Pinatubo victims a certain portion of Clark Air Base Military Reservation located in the Municipality of Capas, Province of Tarlac.”

Catacutan said that upon the issuance of the executive proclamation, many residents and several farmers from Barangays Aranguren, Lawy and Manlapig claimed that they were former owners and tillers of the areas leased to the US military.

To pacify the claimants, then-Tarlac Governor Margarita Cojuangco, former Capas Mayor Hermes Frias, and former Congressman Hermie Aquino addressed the issue through a settlement agreement wherein each claimant was given a 250-square-meter residential lot, while 18 farmers were each awarded a hectare of agricultural land.

(A hectare of tillable land was awarded to each of the 18 farmers. One of these farmers is Froilan Apostol.)

In the complaint-affidavit, Catacutan said, “Records and accounts reveal that he (Apostol) already sold portions of his one-hectare land. Despite the same, he is claiming more than what he owns.”

During the press conference, the mayor said Apostol and his son have been claiming 10 hectares of agricultural land.

Apostol said in the Facebook video that he had been tilling the land even before the US military leased Camp O’Donnell from the Philippine government.

Catacutan said another farmer was claiming 4 hectares, though Proclamation 813 and the settlement agreement brokered by provincial and municipal governments awarded only one hectare of land for every claimant-farmer.

Catacutan alleged his office had tried to reach out to Lucas to clarify the issue and react to Apostol’s claims and comments.

“But Pyra Lucas and the other administrators of her Facebook pages blocked and deleted our posts. They also did not entertain us through the phone,” he said.

Lucas has yet to respond to the mayor’s statement. – Rappler.com