Facebook Twitter Copy URL
Copied
'A change of administration will not be accepted as an excuse to not mind the carnage brought about by [Rodrigo Duterte]'s drug war,' former CHR commissioner Karen Gomez-Dumpit says

MANILA, Philippines – There is no shortage of credible documentation about the dire state of human rights under the administration of former president Rodrigo Duterte.

Numerous reports by various civil society organizations, international bodies, and independent media all paint a picture of a culture of impunity that has plagued the Philippines since 2016. These verified information cover several incidents of abuse, most especially under the violent anti-illegal drug campaign, and are considered valuable in a bid to never forget the atrocities committed and aided by Duterte.

The human rights record of Duterte will be placed under close scrutiny again in November 2022, this time through the Universal Periodic Review of the United Nations. But what does all this mean anyway?

What is a Universal Periodic Review and why is it important?

The Universal Periodic Review (UPR) is a process wherein the human rights records of all member-states of the United Nations (UN) are assessed. The review, conducted by the UN Human Rights Council (UN HRC), also gives out recommendations that can address and improve the human rights situation and address violations in any country.

“[The UPR] also aims to surface the human rights situation in a particular country so that attention is drawn to it particularly by member-states because of the duty of that state to make sure that all of these issues are addressed,” Commission on Human Rights (CHR) executive director Jacqueline de Guia explained during a press briefing on August 11.

“It aims to replicate and identify the best practices of human rights dimensions in a particular country with the hope that member-states will also mirror those best practices in their own countries,” she added.

The human rights record of the Philippines is set to be assessed through the UPR in November 2022. It last underwent this process in May 2017, barely a month into the term of then-president Duterte.

Former CHR commissioner Karen Gomez-Dumpit told Rappler on Tuesday, August 16, that the UPR is treated as a venue for stakeholders to “come together and have an honest dialogue.”

“It is a collective national self-examination that not only tries to bring to the table the rights violations and other prevailing issues but also to spark discussions about solutions that can properly address systemic problems,” she said.

Why does the upcoming review of the Philippines matter? What to expect?

Since the review will cover the past five years, it is likely that the human rights abuses under Duterte will be highlighted and discussed. These include the killings under the violent war on drugs, widespread red-tagging and crackdown on dissent, and continued attacks on freedom of speech, among others.

“This is an opportunity for the people in the Bangsamoro because for how many years Duterte kept denying that there were human rights violations committed when he declared Martial Law and what happened in Marawi,” activist Amirah Lidasan said.

In short, the outcome of the UPR in 2022 can be seen as the human rights report card of Duterte.

The UN HRC member-states will assess and give recommendations based on accurate and verified information they’ve collected from various sources.

Various human rights and civil society organizations (CSOs) have already submitted their independent reports on the Philippine situation to the UN HRC over the past few months. CHR, as the country’s national human rights institution, is also expected to submit information that “mirrors the real situation on the ground.”

The UN HRC will also take into account information provided by the Philippine government through its own national report. This is seen as an issue for many groups as it is the state that often whitewashes human rights abuses even if they’re documented and verified.

According to De Guia, the commission already reached out to the Presidential Human Rights Committee to seek genuine consultation in a bid to make the national report as accurate as possible. CHR also asked to be part of the process.

“[We asked] if we can also have copies of their reports and be asked to comment on those reports to enrich the discussion on the human rights issues and if they can also extend a listening ear to the CSOs and engage them also in meetings,” she recalled CHR having said in the letter they sent.

What can the Marcos administration do about recommendations and observations that member-states will discuss during the 2022 UPR?

The government is primarily responsible for protecting the human rights of its citizens and finding ways to improve the realization of these rights. These can be done by ensuring that observations and recommendations by legitimate institutions, such as the UN HRC, are taken into account and implemented.

While the upcoming UPR of the Philippines is considered a look back at the past five years and does not necessarily cover issues under President Ferdinand Marcos Jr., it is still important for him and his administration to take heed of the outcomes of the review.

“The challenge remains for the incumbent to act upon those issues and concerns and make sure that they’re able to convey concrete actions on the ground that illustrate human rights protection and promotion,” CHR’s De Guia said.

“We want them to address the questions in the minds of many civil society organizations and many sectors in our society with regards to their policies, their intended programs, and the thrust of the current administration with regards to human rights,” she added.

What happened in 2017 when the Philippines last underwent UPR?

The Duterte government tried its best to cover up and deny the dire human rights situation in the Philippines during its UPR in May 2017.

Senator Alan Peter Cayetano, in his opening statement to the UN HRC in May 2017, hit back at critics and said there was “no new wave of killings [in the country], just a political tactic of changing definitions.”

By then, at least 2,000 people had already been killed in legitimate police operations, on top of thousands of victims of vigilante-style killings.

At least 45 countries saw past the Duterte government’s cover-up and still called for an end to the killings under the drug war. They also urged the government to just implement a human rights-based approach in dealing with the drug problem.

At least four countries – Ireland, Hungary, France, and Lithuania – also called on the Duterte administration to invite “without set conditions” then-UN special rapporteur Agnes Callamard to conduct her own probe into the human rights situation in the country. 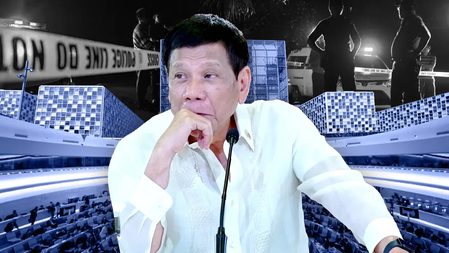 What did the Duterte administration do about recommendations given during the 2017 UPR?

The UN HRC gave out 257 recommendations to the Philippines during the 2017 UPR. The government accepted 103 of these, noted 99, and tagged 54 recommendations as things they could not fully support.

According to former CHR commissioner Dumpit, outright rejection or tagging recommendations as “not fully supported” or “noted” can be interpreted as “denials by the state of the human rights problems on the ground.”

The Duterte government should’ve accepted the recommendations and exerted efforts to take on these calls, she pointed out, instead of vilifying and sidelining civil society and independent institutions such as the CHR. They are, after all, only doing their jobs in keeping a critical eye on the country’s human rights situation.

“At the end of the day, political will should have been demonstrated to ensure that given the grave human rights situation as a result of the drug war, [the government] responded to issues resolutely and has produced results that had positive impact on the victims and their families,” Dumpit said.

In the past five years, CHR’s De Guia said only 12% of the total recommendations were fully implemented or were supported through passed laws and other actions.

The breakdown of the numbers are as follows, according to the commission:

What happens now that the Duterte government failed to follow through with UPR outcomes?

The trail of blood and impunity left behind by Duterte, along with previous recommendations that were ignored, will likely be highlighted in the country’s UPR in November 2022.

The UN HRC, which has been criticized for its soft response to Duterte’s drug war, is expected to provide victims and their families access to justice mechanisms.

For former CHR commissioner Dumpit, the ball is now in the court of Marcos.

“A change of administration will not be accepted as an excuse to not mind the carnage brought about by the drug war,” she said.

“The government of the day must respond and squarely address the violations of the past, so impunity does not calcify.” – Rappler.com