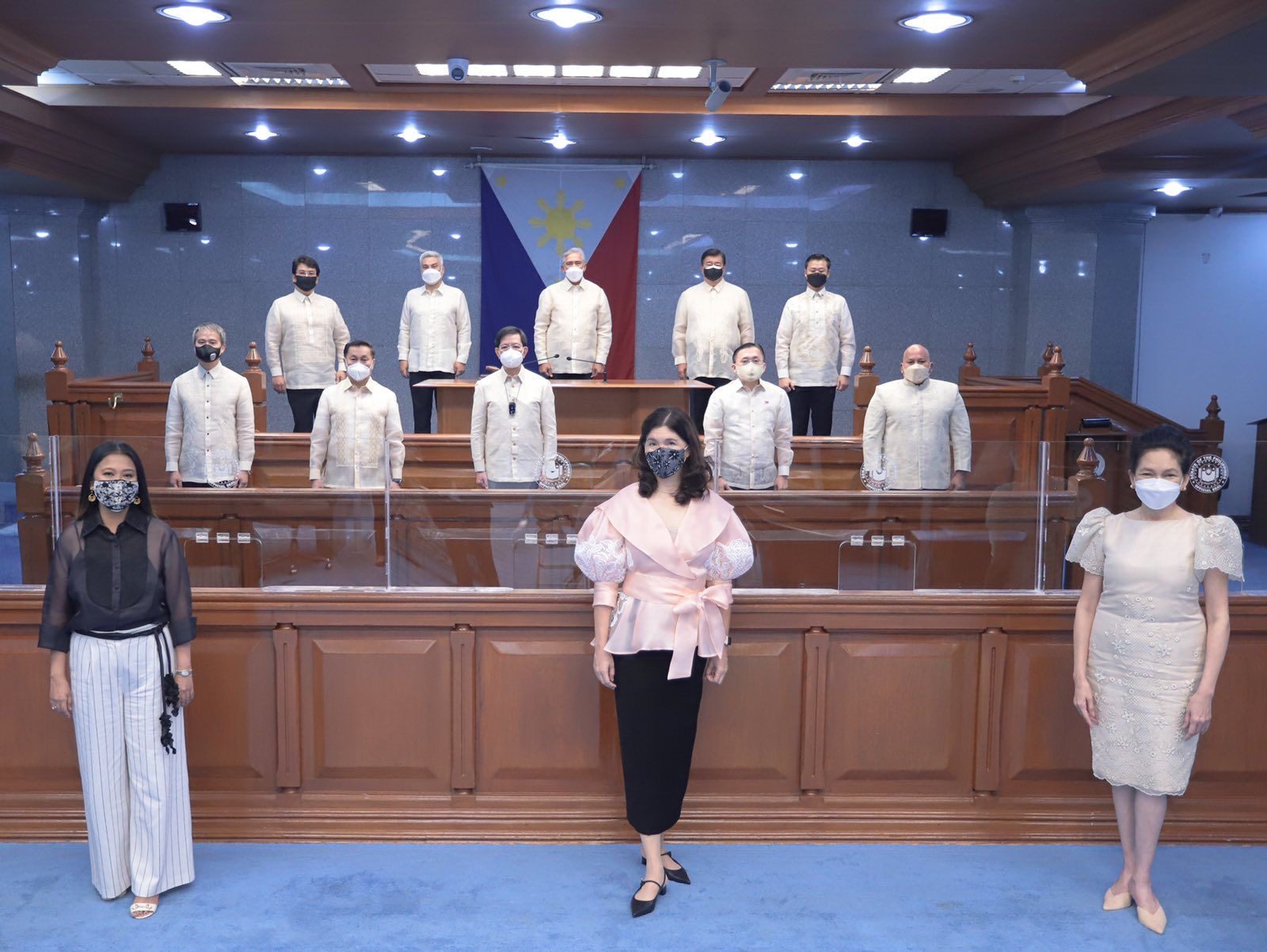 CLASS PICTURE. Senators pose for a traditional group photo during the opening session of the 3rd Regular Session of the 18th Congress on July 26, 2021.

Facebook Twitter Copy URL
Copied
'This is the time to find strength in numbers and to be kind and generous despite our own wants,' says Senate President Vicente III, as he urged fellow senators to unite in passing their priority bills on time

With only a year left in the 18th Congress, senators are going to focus on bills designed to help Filipinos survive the coronavirus pandemic as well as corruption exposés to unmask scoundrels in the bureaucracy.

Nearly all senators were either physically or virtually present for the opening of session, which still follows a hybrid format to observe physical distancing rules.

Only three senators were not able to join the session: senators Leila de Lima, Lito Lapid, and Manny Pacquiao. De Lima is still in detention over what she has described as trumped-up drug charges, while Lapid arrived late so he was considered absent.

Pacquiao was able to join the proceedings remotely, but he was not counted in the attendance since he is currently in the United States, an area outside the jurisdiction of the Philippine Senate. The boxing icon is in Los Angeles for his upcoming fight with boxer Errol Spence Jr. 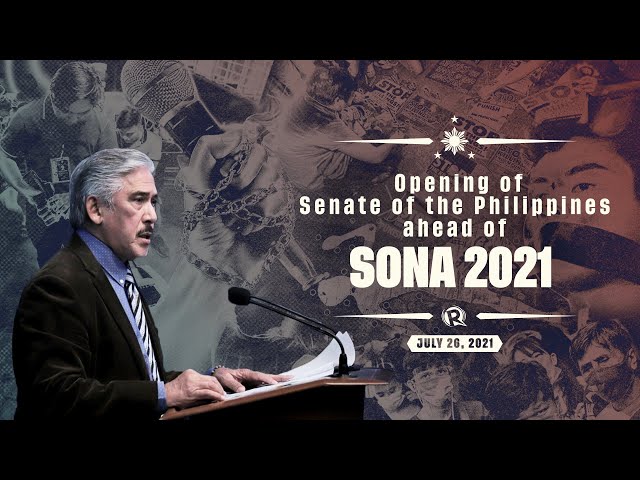 The Senate reopened its session without much fanfare. Over the weekend, Sotto himself and Senator Panfilo Lacson, his standard-bearer in the 2022 elections, bared a supposed plot to unseat the Senate President after Sotto declared his vice presidential bid. But it supposedly “fizzled out.”

But the session on Monday was business as usual, with no senator challenging Sotto’s Senate presidency for now.

Here are the Senate’s priorities in its last year under the 18th Congress, according to Sotto:

In his speech, Sotto said the Senate will support all efforts to keep the population “COVID-resistant,” including giving the necessary funding to government programs fighting the pandemic.

The Senate will also aim to exercise its oversight functions by checking if the pandemic aid funds are being used for the right programs and are reaching the target beneficiaries.

Job generation will also be a priority agenda for the senators. Sotto said they will push for measures to help revive or strengthen industries that can provide employment for Filipinos left jobless by the pandemic.

In a press conference after the session, Sotto said senators are expected to pass bills on trade liberalization as well as easing restrictions on foreign investments, as these are designed to produce jobs for Filipinos.

The Senate may also pass its still-pending version of the proposed Bayanihan 3 bill to fund subsidies for Filipinos and the government’s COVID-19 vaccination drive.

The House has already passed its version in June, while the measure in the Senate has yet to be tackled in the committee level.

Sotto said senators would also prioritize the protection of OFWs, especially those who lost work abroad due to the pandemic.

He said the senators are aiming to pass “as soon as possible” the bill creating the proposed Department of Migrant Workers and Overseas Filipinos. The House already approved its version in March 2020.

Sotto said there is a need for the Senate to tackle measures aimed to better equip the Philippines for natural and man-made calamities.

Just like the proposed agency for OFWs’ welfare, the Senate will keep the proposed bill creating the Department of Disaster Resilience as a priority in their last year in office. The House has also approved its version of this measure.

The public can also expect the Senate to conduct several probes digging into corruption anomalies hounding the Duterte government.

Sotto, however, has not yet identified which specific issues they want to investigate when reporters asked during his press conference.

“We will continuously seek to expose corruption in public service and direct the searchlight of one of our committees towards the dark corners of our bureaucracy where corruption and injustice thrive unnoticed,” Sotto said.

Pacquiao has already filed a resolution on July 15 formally calling for a probe into alleged missing P10.4-billion pandemic aid at the Department of Social Welfare and Development.

The Senate blue ribbon committee, the panel tasked to look into corruption issues in government, has yet to schedule a hearing on Pacquiao resolution.

At the end of his speech, Sotto asked his colleagues to work together so they could pass their priority bills on time. He also appealed to Filipinos to cooperate with their legislators.

“The times have become a test of our mettle not only as individual people, but also as a nation, and more importantly as a nation, among many others in the world. For we cannot fight this fight individually, nor think of ourselves at the expense of others,” said the Senate President.

“This is the time to find strength in numbers and to be kind and generous despite our own wants. Whatever the outcome of tomorrow, [it] is our shared destiny,” he added.

The Senate’s reopening just lasted for 37 minutes, as senators had to prepare for Duterte’s SONA in the afternoon.

Only eight senators will be going to the Batasang Pambansa in Quezon City to listen to Duterte’s speech live, while the rest will watch the SONA remotely. – Rappler.com