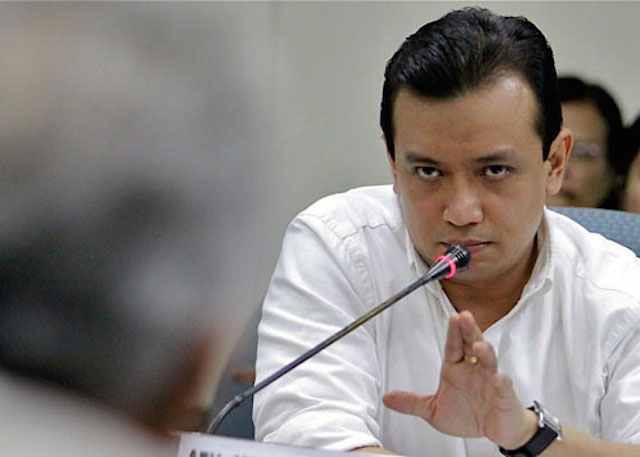 MANILA, Philippines – Senator Antonio Trillanes IV said on Tuesday, February 21, he had called President Rodrigo Duterte's "political bluff" ordering the Anti-Money Laundering Council (AMLC) to show his net worth amid revived allegations that he and his family had unexplained amounts of cash in the bank when he was mayor.

The senator, who first accused the Dutertes of having some P2.4 billion in bank during the campaign period in 2016, said he had written to the AMLC on Tuesday to "request for a list of all flagged/reported bank transactions of President Rodrigo Roa Duterte from 2006 onwards, after the latter said in a speech that he has directed the AMLC to release his bank transaction."

“I believe that President Duterte’s public announcement to release his bank transactions is just a political bluff because simply writing a waiver addressed to the bank would have been much simpler. Nonetheless, I am calling his bluff and I have written to AMLC to publicly release said information,” the opposition senator said. 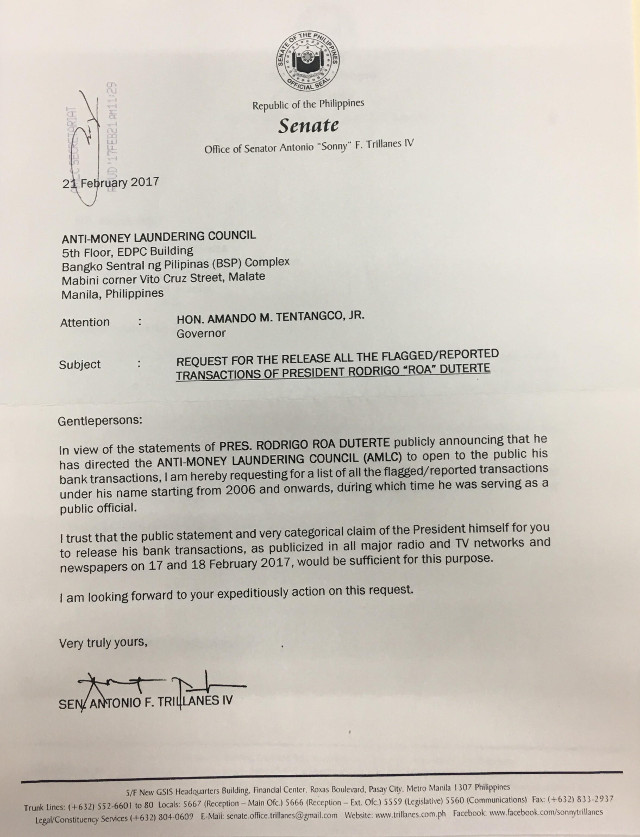 AMLC LETTER. A letter from the Office of Senator Antonio Trillanes IV requesting for a list of the flagged or reported transactions under President Rodrigo Duterte's name from 2006 onwards.

Trillanes brought up the issue again on February 16, saying the his questions he raised in May 2016 remain unanswered.

In addition to claiming that Duterte accumulated P2.4 billion in several Bank of the Philippine Islands (BPI), the senator provided to media the supposed transaction records of bank accounts owned by Duterte, his 3 adult children, and his common-law wife, Honeylet Avanceña, from 2006 to 2015.

During his dinner with members of the Philippine Military Academy Class of 1967 over the weekend, the President assured his adoptive class that he would not bring shame to their name over these allegations of corruption.

"I’ve ordered AMLC and everybody to give information on what’s my worth in this, in terms of pesos in this planet, so I don't bring shame to you," said Duterte said.

Though he called the allegations a "rehash" and "pure garbage," he insisted that he and members of his family never obtained money illegally. He said that if he or his family is involved in corruption, he would resign from his position "immediately." – Rappler.com