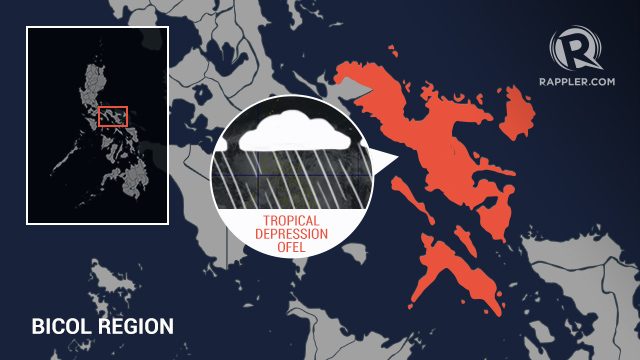 The Bicol Region bore the brunt of Tropical Depression Ofel, with heavy rainfall since Tuesday night, October 13, causing floods and landslides in the provinces of Sorsogon, Camarines Sur, Camarines Norte, and Albay.

Bichara also prohibited sailing in all coastal waterways in Albay as well as river channels.

Daep said affected were the west coast towns of Libon, Oas, Pioduran, the coastal areas of Manito, and this city.

At the evacuation centers, Daep said that disaster responders were asked to check the temperature of every evacuee and allow only 4 families in each room.

Daep said that at least 100,000 individuals were evacuated.

The Philippine Coast Guard canceled transport operations in all seaports in the Bicol region.

At least 526 passengers, 156 trucks, and 41 cars were stranded because of the closure of ferry service.

The cancellation also affected 17 sea vessels, 11 of which took shelter in the ports of Sorsogon, Albay and Camarines Sur.

Guinobatan town Mayor Gemma Ongjoco also ordered the evacuation of at least 800 people in the villages of Maninila and Tandarora within Mayon units for safety.

These two villages are threatened by flooding and lahar flow. Ongjoco hired the public utility jeepneys in the evacuation of the residents on Wednesday. – Rappler.com

Rolly death toll in Bicol revised to 19; most of region still without electricity