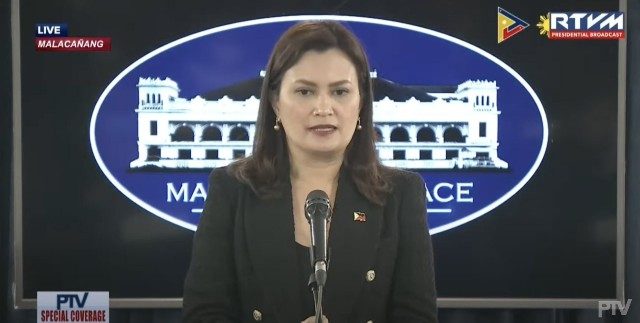 Facebook Twitter Copy URL
Copied
Lifestyle TV host Daphne Oseña-Paez is introduced as the 'Palace briefer,' who will meet with media every Tuesday

MANILA, Philippines – TV personality Daphne Oseña-Paez became the newest addition to the Malacañang communications team when she was introduced Tuesday, December 20, as the Palace’s “press briefer.”

When asked by reporters if she had a Cabinet rank, and how they should call her, Oseña-Paez only said, “you can just call me Daphne.”

“My role here is to amplify and communicate the message of President Marcos, and the Cabinet, and the government, and you are my partners in this. I will be here to brief you every Tuesday regularly after Cabinet meetings to express and to represent whatever programs and news items that need to be amplified,” Oseña-Paez said.

She was introduced by Office of the Press Secretary’s officer-in-charge Cheloy Garafil.

While Oseña-Paez started her career as a news reporter, having briefly covered the administration of former president Fidel Ramos in the 1990s, she made a name for herself as a lifestyle TV host.

From 1999 to 2006 she hosted the lifestyle show F! on ABS-CBN, and hosted her own architecture and real estate show Urban Zone from 2006 to 2012, among other TV projects.

Oseña-Paez’s father Colonel Delio Oseña was a helicopter pilot of the late dictator Ferdinand E. Marcos, father and namesake of the current president.

Oseña-Paez spent her high school and college days in Canada, where her family immigrated in 1983. Her father was posted by Marcos for an official assignment attached to the Philippine Consulate in Canada, according to the Palace briefer’s personal blog.

While in Canada, Oseña-Paez studied art history and urban studies at the University of Toronto.

The TV host publicly supported Marcos during the 2022 presidential election and hosted several events for the Palace prior to her designation as Palace briefer.

Marcos had said previously that he would not appoint an official spokesperson and would only speak for himself.

“The President will speak for himself. I am just here to support the Office of the Press Secretary for now,” Oseña-Paez said.

While health reasons were cited, Angeles’ resignation followed a communications gaffe during Marcos’ visit to the United States, where the former press secretary falsely claimed that Marcos was the only leader with whom US President Joe Biden had engaged in bilateral talks. Although Angeles used to hold the weekly Palace briefings, she was not designated as Marcos’ official spokesperson.

Garafil was appointed officer-in-charge of the OPS after Angeles’ resignation.

For Marcos’ 13th cabinet meeting, Oseña-Paez said department heads presented the key accomplishments of their respective agencies from July to December, and their programs for 2023.

Oseña-Paez said she would be the point person for the media for weekly updates on the priorities and agenda of the Marcos administration.

“I used to be on the opposite side, so this isn’t new to me,” the former TV host said in Filipino.

“Although the times are different now, I look forward to doing these weekly updates with you. Since I will be the one who will be regularly your source for updates from the Palace, I look forward to working with all of you, of course, in a harmonious and collegial manner, because I am also one of you. I am very honored to be communicating the message and programs of this administration, of course, in an accurate and effective way and I will do my best,” she added. – Rappler.com