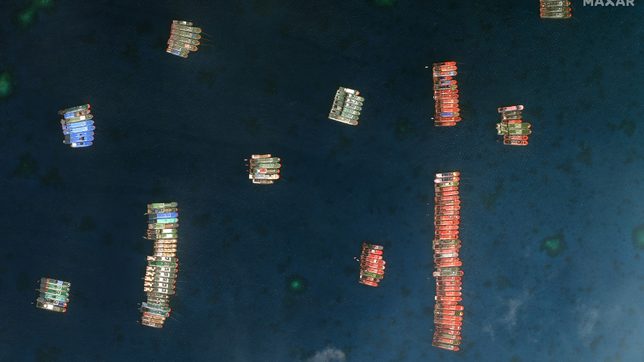 The Philippines and United States discussed their shared concerns over Chinese activities in the South China Sea, including the West Philippine Sea, in a call on Wednesday, March 31, the White House said.

Sullivan and Esperon, the White House said, “agreed that the United States and the Philippines will continue to coordinate closely in responding to challenges in the South China Sea.” (READ: Biden’s opportunities in PH and how Duterte can gain from them)

“Sullivan underscored that the United States stands with our Philippine allies in upholding the rules-based international maritime order, and reaffirmed the applicability of the US-Philippines Mutual Defense Treaty in the South China Sea,” it added.

The call between the countries’ national security advisers in Manila and Washington comes as the Philippines has described the presence of hundreds of Chinese boats anchored near features in its exclusive economic zone in the West Philippine Sea as “swarming and threatening.”

Led by Esperon, the Philippines’ National Task Force for the West Philippine Sea maintained the Chinese vessels were manned by Beijing’s maritime militia – a claim denied by Chinese diplomats, who have asserted that the boats were seeking shelter from “rough seas,” and that no militia were aboard. The scattering of China’s ships in Philippine waters had been documented by the NTF-WPS after Defense Secretary Delfin Lorenzana and Foreign Secretary Teodoro Locsin Jr repeatedly demanded that China withdraw its vessels in the West Philippine Sea.

The Philippines earlier filed a protest against China after over 200 vessels first spotted near Julian Felipe Reef in early March continued to linger in the area, despite showing no signs of actual fishing activity.

On Thursday, April 1, Locsin had reasserted that islands and other maritime features in the West Philippine Sea belonged to Filipinos despite China’s illegal build-up in these areas.

“Within our EEZ so it’s ours. The durability and vintage of the structures don’t matter. Ours,” Locsin tweeted. He made the statement after the Armed Forces of the Philippines (AFP) conducted a patrol over Union Banks, a group of features within the Kalayaan Islands Group under the Municipality of Kalayaan in Palawan.

“During this patrol we were able to document manmade structures that built on some of the features. These structures are illegal,” the AFP said.

Canada, Australia, Japan, and Europe are among countries that have voiced concern about China’s intentions in the South China Sea.

The US had earlier backed the Philippines’ concerns over the presence of Chinese maritime militia in its waters, vowing to stand by its oldest ally in Asia.

Brunei, Malaysia, the Philippines, Taiwan, China, and Vietnam have competing territorial claims in the South China Sea, through which at least $3.4 trillion of annual trade passes. – with reports from Reuters/Rappler.com