UP, safe space to protest anti-terror law, is latest casualty in war on dissent University of the Philippines President Danilo Concepcion speaks at the Quezon Hall during the protest on January 19, 2021, against the recent move of Defense Secretary Delfin Lorenzana to scrap the Soto-Enrile accord.

Facebook Twitter Copy URL
Copied
Defense Secretary Delfin Lorenzana's message to UP that they do not wish to suppress activism 'feels more like a threat, like a promise to do the opposite,' says human rights lawyer Kristina Conti 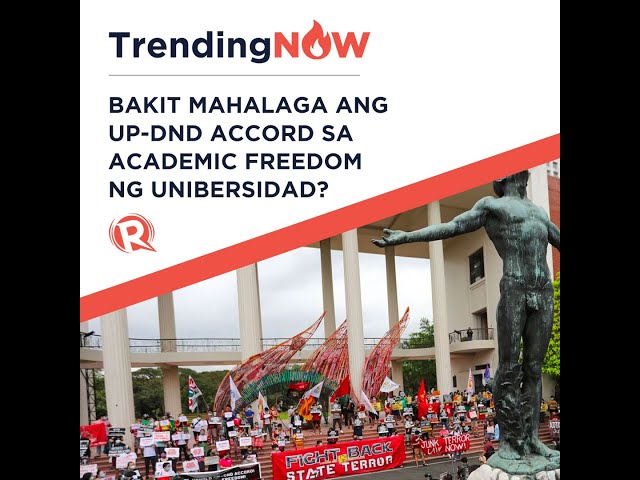 Lawyer Ryan Balisacan, a University of the Philippines (UP)-Diliman alumnus, called it “surreal” when on June 12, he was denied entry to his campus, where protesters converged to rally against the then still unsigned anti-terror bill.

The Independence Day protesters were defying prior government warnings of arrests, their confidence rooted on knowing that UP is a safe space for protests by virtue of the 1989 UP-DND accord.

Balisacan was among the unlucky handful who picked the wrong entrance at the wrong time. Just before he arrived, police allowed people into the campus after screening them at the borders. The border was the nearest the cops could get into UP – at least visibly – as the accord required law enforcers to give prior notice before entering the campus.

That day, a fearful but defiant crowd gathered along University Avenue of the UP Diliman to condemn the anti-terror bill. The protesters said the then proposed legislation could make criticizing the government a form of terrorism.

The day wrapped up in UP without arrests – the sun peeping around noon after a morning of rain showers, reflecting a hopeful end to a vibrant day of dissent. A day Balisacan didn’t get to join the protest.

“Has the Soto-Enrile accord been abrogated? Was the presence of police and military officers on campus known to the administration? Is this something we can expect more of in the future?” Balisacan asked then.

“My disappointment was tempered only by the knowledge that the planned protest did push through,” Balisacan added.

The accord again played a crucial role a month later during President Rodrigo Duterte’s 4th State of the Nation Address (SONA) on July 27. This time the feared anti-terror law was already in effect.

Days before, the  Department of the Interior and Local Government (DILG) ordered local government units (LGUs) to enforce a national ban on mass gatherings, which included rallies during SONA. The memorandum warned local executives – crack down on rallies or face charges yourself.

It’s a reiteration of the Independence Day warning – using the pandemic as preface to ban rallies – but one that did not stand on solid ground as the Constitution guaranteed the rights to assembly and expression.

The DILG would eventually stand down because of the UP-DND agreement.

Yes, there could be a rally, but only inside UP – and once again the campus served as venue for a rare showing of unified resistance by the fractious opposition.

The unified SONA rally indicated that dissent was coming to a boil, and UP served as the pot.

Now the Duterte government turned up the heat, unilaterally ending the accord even though the agreement does not provide for an exit clause.

“Indeed UP has bred rebels and nonconformists—as well as it has bred presidents, senators, congressmen, and business, civic, and even military leaders. Left in peace, UP will continue to be a major contributor to the country’s development and to its national leadership in all fields,” said UP President Danilo Concepcion in a statement on Tuesday, January 19.

The military as seatmates

The unilateral termination of the accord “practically makes the military the students’ seatmates,” said National Union of Peoples’ Lawyers (NUPL) president Edre Olalia.

“This is unmitigated intrusion and a puny attempt at standardization of thinking,” Olalia said.

The accord quite literally cast a protective spell around campus. Once you are in, you are safe.

During the SONA rallies, as a transwoman stood on stage by the Oblation with a megaphone calling to oust Duterte, police arrested a group of 5 protesters aboard a jeepney a few blocks away from the campus. They have not even started protesting yet. They were eventually released without charges.

It was the same thing Balisacan experienced as a law student in 2006 when they protested against former president Gloria Macapagal-Arroyo’s Proclamation No. 1017 that declared a state of emergency over the country to crack down on the Left.

That saw an unprecedented lawyers’ march to EDSA shrine.

As a law student, Balisacan was inside UP.

“Outside campus, Arroyo’s henchmen were arresting oppositionists left and right. Professor Randy David, a renowned public intellectual, was arrested without a warrant in front of TV cameras. People were choosing their words and being careful with their action, fearing that they will be next,” Balisacan said.

“But in UP, there was hardly a moment of silence. What really struck me was the exhiliration brought by the fact that then and there, we just felt so free, so unrestrained, and so unshackled by the fear of arrests or dispersals,” said Balisacan.

The arrest of David was part of the springboard to a landmark decision of the Supreme Court – David vs Arroyo, which declared parts of Proclamation 1017 unconstitutional, and strengthened our grasp on fundamental freedoms.

These are the very same freedoms at risk today with the anti-terror law.

And so the same lawyers who marched in 2006, among them former vice president Jejomar Binay and key Left leader Neri Colmenares, have returned to file a petition against the anti-terror law together.

They also lead the reorganized Concerned Lawyers for Civil Liberties (CLCL), which deployed lawyers and paralegals to UP for the anti-terror law protests of 2020.

“Cancelling the accord will have the greatest impact on everybody’s right to speak and to peaceably assemble,” said CLCL’s Kristina Conti, also a UP-Diliman alumna. She noted that there have been no physical classes inside UP this academic year. This means that protests are the target of the termination, Conti added.

Lorenzana said in his letter to Concepcion that “we do not intend to station military or police inside UP campuses nor do we wish to suppress activist groups, academic freedom and freedom of expression.”

“When Lorenzana says (that), it feels more like a threat, like a promise to do the opposite,” Conti said. – Rappler.com