Facebook Twitter Copy URL
Copied
'He was a tireless champion for the freedom of the press and the welfare of media workers,' says the National Union of Journalists of the Philippines

Veteran journalist and former chairman of the National Union of Journalists of the Philippines (NUJP) Jose Jaime “Nonoy” Espina died on Wednesday, July 7, after battling liver cancer, his family confirmed.

Espina was 59 years old, and died at their home in Bacolod.

Espina “survived a severe infection of COVID19 and was able to return to the bosom of the family. His death was due to liver cancer,” said Varona.

Espina had just turned over the NUJP to a new set of officers early this year, but even amid health problems he shepherded the union through challenging times for the Philippine press.

Under his chairmanship, the NUJP led rallies in support of media organizations which were harassed by the Duterte government – the closure order by the Securities and Exchange Comission of Rappler in 2018, and the franchise kill of ABS-CBN in 2020.

“Nonoy was among the loudest voices at rallies in support of the renewal of ABS-CBN’s franchise, leading a march in Quezon City in March 2020 and later joining similar activities in Bacolod City, where he was based,” the NUJP said in a statement.

“He was a tireless champion for the freedom of the press and the welfare of media workers,” said the NUJP. Espina was among the founding members of the union, and a member of the directorate for multiple terms until his chairmanship from 2018 to 2021.

“He led the NUJP through waves of attacks and harassment by the government. For his defense of colleagues, he was red-tagged himself, and, alongside other members of the union, was made a target of government propagandists,” said the NUJP.

Espina “was also among the first responders at the Ampatuan Massacre in Maguindanao in 2009,” said the NUJP, referring to the worst attack on Philippine media in the country’s history, where 32 journalists were killed when a powerful political clan ambushed the convoy of its rival who was on his way to file a certificate of candidacy.

At the tail end of his chairmanship, the NUJP led the campaign for justice for the 58 victims of the massacre up to the historic conviction in December 2019 for the principal suspects.

Speaking to Rappler in 2019 about the Ampatuan case, Espina discussed the need for the Philippine media to galvanize and fight for workers’ rights, saying the situation “has worsened” since the massacre.

“Community media aside, even the mainstream especially broadcast, there are more and more contractual workers, there’s no security of tenure, no benefits – that’s harsh,” said Espina.

This is true to Espina’s character.

“A former senior editor for news website InterAksyon, he advocated for better working conditions for media despite himself being laid off from the website, a move that he and other former members of the staff questioned before the National Labor Relations Commission (NLRC),” said the NUJP.

“They won that fight and Nonoy has led many other journalists to join the bigger fight for a more independent and freer press,” said the NUJP. 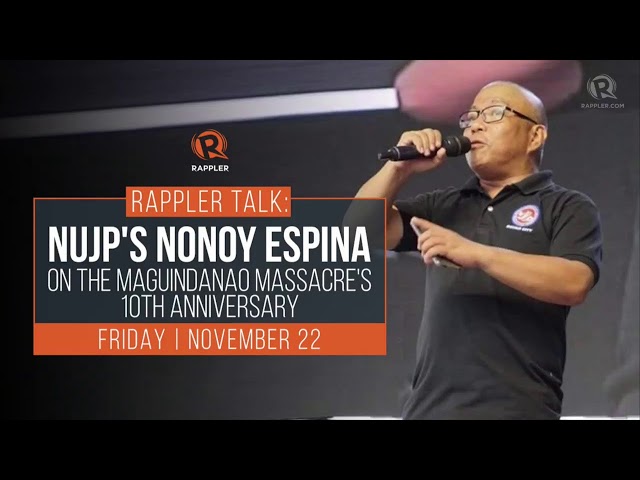 A journalist through and through

Espina was a musician known to journalists for his signature singing voice, “but he was first and foremost a journalist,” said Varona.

Espina had been a journalist from high school to college, editing UP Visayas’ Pagbutlak. Espina was a recipient of the College Editors Guild of the Philippines or CEGP’s Marcelo H. Del Pilar Award, the highest honor of the guild.

“He was later part of community media group Correspondents, Broadcasters and Reporters Association—Action News Service, or COBRA-ANS, which was part of the “mosquito press” during the Marcos dictatorship,” said the NUJP.

He also served as editor for Inquirer.net.

“NUJP thanks him for his long years of service to the union and the profession and promises to honor him by protecting that prestige,” said the union.

“Nonoy leaves us with lessons and fond memories, as well as the words he often used in statements: That the press is not free because it is allowed to be. It is free because it insists on being free,” the NUJP said.