ANGELS OF THE SEA. Some of the female radio operators of the Philippine Coast Guard.

The female radio operators of the Philippine Coast Guard (PCG) ships have been effective in challenging foreign ships traversing the country’s exclusive economic zone (EEZ), according to a former PCG chief.

In a Southeast Asia Speaks interview with Rappler on Wednesday, October 20, retired Admiral George Ursabia Jr. said the voice of female PCG radio operators, also dubbed as “Angels of the Sea,” remind the personnel of foreign ships traversing Philippine waters of their female loved ones.

Ursabia said the practice started in 2018 and received positive feedback. The positive outcome inspired the Coast Guard to also adopt the practice in its ships patrolling the EEZ.

“We experienced this way back in 2018 in the Pasay-Basilan strait and Sibutu passage, wherein female radio operators of the Philippine Coast Guard were the ones challenging transiting ships in those areas and we were receiving good feedbacks from seafarers and mariners na para bang nakakagaan ng loob para sa kanila (that it seems like it reassures them),” Ursabia said.

In June this year, 81 female PCG personnel were anointed to serve as Angels of the Sea to keep tensios from rising while the PCG challenges foreign ships in the EEZ. The PCG added that the Angels of the Sea serve as the “voice of peaceful and rules-based order at sea, especially in our country’s  sensitive maritime frontiers.” 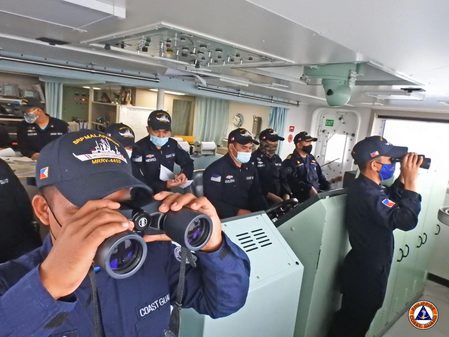 With the continuous presence of Chinese ships in the country’s waters, the PCG and other maritime law enforcement groups beefed up their patrols to monitor the county’s EEZ.

The PCG has also been active in warding off Chinese vessels. The most recent one was in July when a PCG ship shooed away a Chinese navy warship in waters off Marie Louise Bank in Palawan. – Rappler.com