PUBLIC APPEARANCE. Former president Rodrigo Duterte speaks to the media after attending the wake of former president Fidel V. Ramos at the Heritage Park in Taguig City, on August 4, 2022.

Facebook Twitter Copy URL
Copied
'If I go to prison, I should go to Muntinlupa,' says former president Rodrigo Duterte

It was the first public appearance of the former chief executive since he stepped down from office on June 30 after six years in Malacañang.

In the ambush interview, he said Ramos – whom he called a mentor in the past – was the first person who convinced him to run for president.

“Pumasok si FVR, may dalang tennis bag, nilagay niya sa gitna, sabi niya, iyan lang ang pera ko na maitulong ko sa kanya (FVR brought a tennis bag, placed it in front, and said that’s the only money he could give to help me). He was the first one who forced me to run, and the first one to contribute the money. That is my fondest memory of FVR,” he said.

He also declined to comment on President Ferdinand Marcos Jr.’s decision to keep the country from rejoining the International Criminal Court (ICC). But Duterte though took a swipe at the ICC.

Duterte is facing an ICC probe over his bloody drug war. While Duterte’s decision for the Philippines to withdraw from the ICC in 2019 won’t affect the investigation against him, exacting cooperation with the Philippine government will be difficult.

Watch the full interview below: 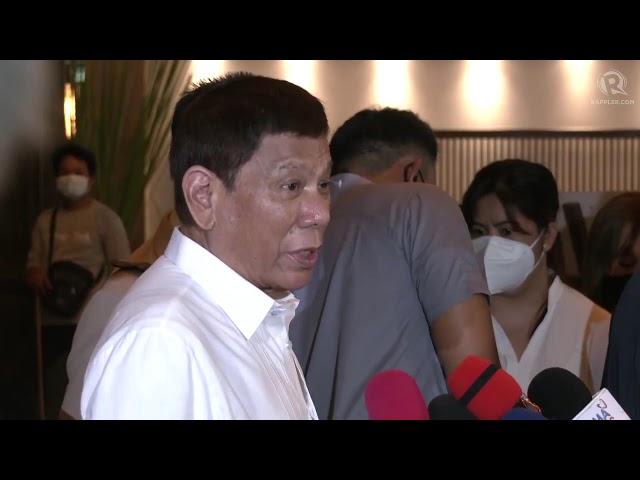