MANILA ARCHBISHOP. A pallium is bestowed to Cardinal Jose Advincula, Archbishop of the Archdiocese of Manila by Archbishop Charles Brown, papal nuncio to the Philippines, on December 8, 2021, during the solemnity of the Immaculate Conception, at the Manila Cathedral.

Facebook Twitter Copy URL
Copied
'Indeed, we show the world that we are actively engaged citizens who have the power and dignity to choose our nation’s destiny by coming together in prayer and solidarity,'Manila Archbishop Jose Cardinal Advincula says

MANILA, Philippines – The EDSA People Power Revolution proved Filipinos have the “power and dignity” to choose the destiny of our nation, according to Manila Archbishop Jose Cardinal Advincula. 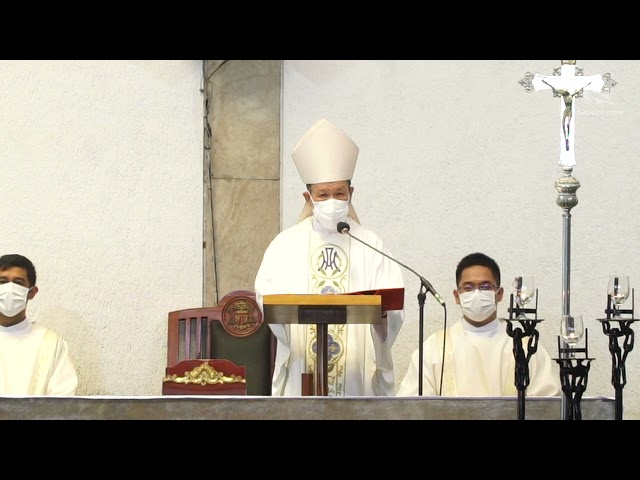 “At EDSA, we show the world that ordinary Filipinos are not passive dependents and blind followers of fake newsmongers and greedy power players,” Cardinal Advincula said during his homily at the EDSA Shrine on the 36th anniversary of the People Power Revolution on Friday, February 25.

“Indeed, we show the world that we are actively engaged citizens who have the power and dignity to choose our nation’s destiny by coming together in prayer and solidarity.”

The peaceful uprising toppled down the dictatorship of Ferdinand Marcos, who stayed in power for over two decades.

The Church has proved its influence in encouraging people to unite. This was best exemplified when then-Manila Archbishop Jaime Cardinal Sin, in 1986, appealed to people to go to Camp Aguinaldo and support then Minister of Defense Juan Ponce Enrile and military vice chief of staff Fidel Ramos.

In his homily, Advincula also encouraged Filipinos to not let EDSA be a “mere page of national history.”

“Now is an important time to uphold our national dignity as Pueblo Amante de Maria. Let us not allow EDSA to be a mere page of national history. EDSA is not just a political event about the reconfiguration of power, EDSA is a religious and spiritual experience that cuts through time and inspires our life as a nation,” the cardinal added.

Shortly after Marcos’ downfall, the EDSA Shrine was built to serve as a reminder of the EDSA Revolution and also of the Blessed Mother’s intercession. – Rappler.com