[WATCH] Marcos on China’s ‘bully’ remarks: Don’t allow anyone to dictate to us 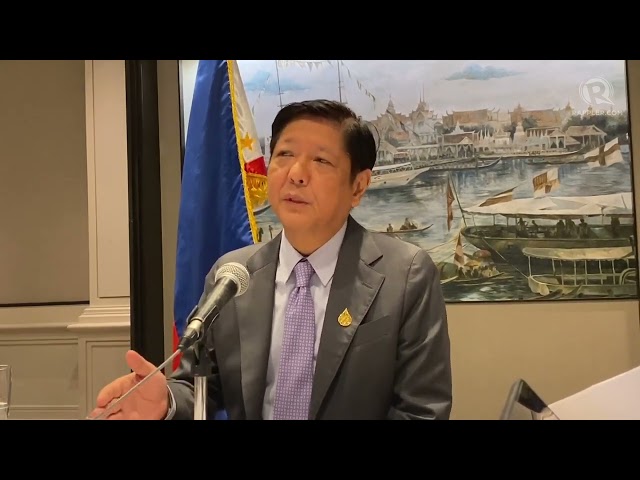 Facebook Twitter Copy URL
Copied
President Ferdinand Marcos Jr. says countries in the Asia Pacific should be the ones to decide on the future of the region

MANILA, Philippines – President Ferdinand “Bongbong” Marcos Jr., who recently met leaders from the Asia-Pacific region, said no one should be allowed to dictate the Philippines and its neighboring nations regarding the countries’ future.

“I would say that as part of our foreign policy – and this is something again that I spoke to our other partners with – what we really should pursue is that we should make sure that we in the region are the ones who will decide the future of the region,” Marcos said during an interview with reporters in Bangkok, Thailand, on Saturday, November 19.

“Huwag nating pabayaan na dinidiktahan tayo ng kahit sino (Let us not allow anyone to dictate to us). Maybe that’s what the Chinese were referring to,” the President added.

Marcos’ remarks came after the Chinese Ministry of Foreign Affairs said that the Philippines and China should “work together to reject unilateralism and acts of bullying, defend fairness and justice, and safeguard peace and stability in the region.”

The statement, issued on November 17, was released after Marcos’ meeting with Chinese President Xi Jinping during the sidelines of the Asia-Pacific Economic Cooperation Summit in Bangkok.

During his Saturday meet with the media, Marcos added that countries in the Asia-Pacific region should be the ones to decide on the future of the region.

“It is us in ASEAN, it is us in Asia who should decide. Australia kasama (included) because they really consider themselves part of Asia,” the President said.

“It should be us in Asia who decides the future of Asia, the Asia-Pacific region, the Indo-Pacific region. Dapat ang mga taga-roon ang magkukumpas kung saan ang takbo ng region na ‘yan (Those who live there should dictate the things that will happen in that region).”

For many occasions, China has repeatedly called the United States a “bully.” But on the contrary, China is the one accused of bullying other nations in relation to the South China Sea.

China, especially during the previous administration, was very aggressive toward its nonexistent claims in the West Philippine Sea. Former defense chief Delfin Lorenzana even called China’s take over of Scarborough Shoal as “bullying.” – with reports from Bea Cupin/ Rappler.com