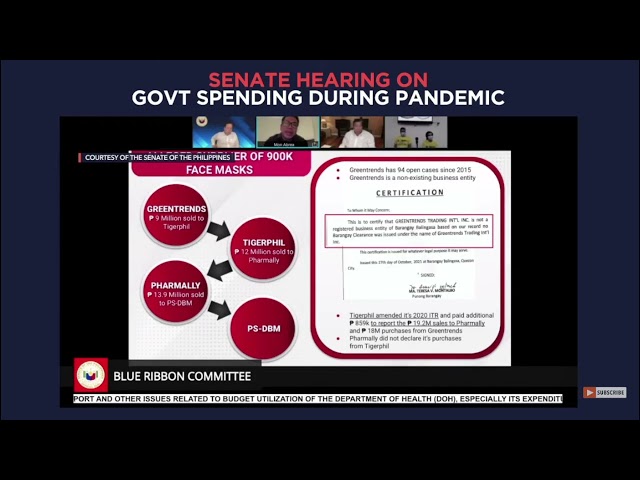 Facebook Twitter Copy URL
Copied
The findings are based on an independent analysis of documents submitted by the Bureau of Internal Revenue, along with Pharmally's audited financial statements, and delivery receipts from the PS-DBM

MANILA, Philippines – An independent analysis of financial records belonging to Pharmally Pharmaceutical Corporation, the government’s most favored pandemic supplier, has pointed to a whopping P6.3 billion in tax deficiencies owed to the Bureau of Internal Revenue (BIR).

Tax expert Mon Abrea told senators present at the Senate blue ribbon committee hearing on Thursday, January 27, that findings were based on documents submitted by the BIR to the panel, along with delivery receipts from the Procurement Services of the Department of Budget and Management, as well as the company’s audited financial statements.

Among the material misstatements found in records relating to Pharmally’s transactions included the following:

Abrea said Pharmally’s officials could be held liable for these deficiencies under Section 248 (b) of the tax code where a “claim of deductions in an amount exceeding (30%) of actual deductions” and Section 255 where there is a failure to supply correct and accurate information in tax returns will render the taxpayer liable.

The findings come after marathon hearings at the Senate first launched in August 2021. Nineteen hearings later, lawmakers have gone from zooming into how the Pharmally, which lacked the capability and credibility to engage in big ticket government procurement, obtained the most government pandemic contracts – to ramping up scrutiny on the firm’s financial records.

Pharmally managed to bag P10 billion in deals so far. It was financed by Michael Yang, President Rodrigo Duterte’s former economic adviser, to continue paying both its Philippines-based and China-based Chinese suppliers.

The PS-DBM’s seeming preference for the firm came at the expense of shutting out local PPE producers who had difficulty accessing government pandemic deals and were forced to cut thousands of local jobs.

Committee chairman Senator Richard Gordon said on Thursday, that the amount of contracts garnered by Pharmally could have also been spent by government in more productive ways like building at least 3 tertiary hospitals, funding the construction of 3,200 4-classroom one storey buildings, or funding the special risk allowance of some 125,000 health workers at about P75,00 per year.

Watch Abrea’s assessment of Pharmally’s financial records in this excerpt from the Senate hearing. – Rappler.com