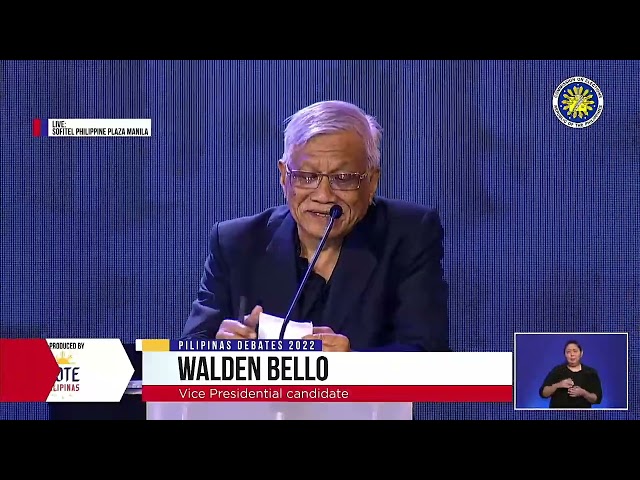 Bello, the running mate of labor leader Leody de Guzman, sang Sinatra’s “Where Are You?” to take a swipe against the UniTeam. Both Marcos Jr. and Duterte skipped the Commission on Elections debates on Saturday and Sunday.

“Yes. Now this is meant specifically for Sara Duterte and for Bongbong Marcos and I’ll sing. Frank Sinatra. Where are you? Where did you go without me? I thought you cared about me. Where are you?,” Bello said.

“Nasaan ka? Nasaan ang pera? Ibalik mo na ang pera. Ibalik mo na. (Where are you? Where is the money? You have to return the money. Give it back). That’s for Marcos Jr.’s P203 billion. You owe it to the Filipino people. Give it back! That’s my answer,” Bello added.

Bello was pertaining to the Supreme Court decision ordering the Marcoses to pay a tax liability of P23.29 billion. However, penalties have accumulated across the decades that Marcos heirs had failed to pay the debt. This ballooned to P203 billion, according to an Inquirer column of retired Supreme Court Justice Antonio Carpio. Aside from singing a Sinatra classic, Bello also confronted the Comelec during the debate. Bello even threatened to walk out due to Comelec’s “lame” punishments against debate skippers. – Rappler.com