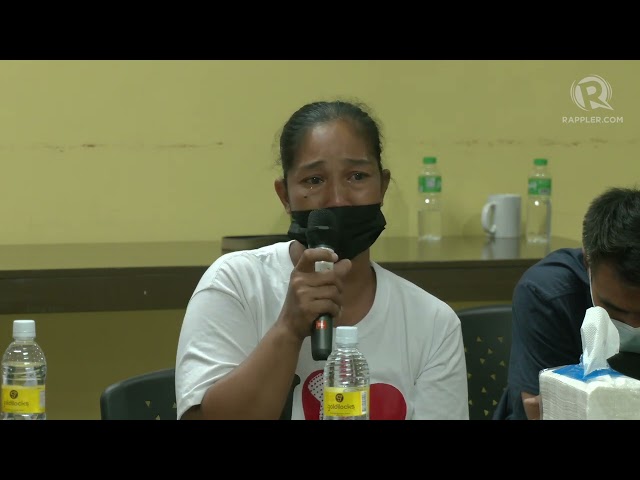 Facebook Twitter Copy URL
Copied
Drug war widows and orphans share testimonies on how their loved ones were slain, contradicting what was declared on death certificates and police reports

MANILA, Philippines – Relatives of those who were killed during the so-called war on drugs of the Duterte administration recalled their tragic experiences during a briefing conducted by forensic pathologist Raquel Fortun and activist priest Flavie Villanueva on Tuesday, April 12.

Fortun and Villanueva unveiled the findings of their probe which involved the examination of 46 remains of drug war victims – those killed by the police and by vigilantes.

Among those who spoke during the briefing was Sarah, who shared how she struggled with taking care of the family after her son was killed in the administration’s bloody campaign. She said it was only Villanueva who helped her family recover.

Pauline, a drug war widow, recalled how a police pointed a gun at her while they were questioning her husband, Mario Mendoza. She said Mario told the cops he didn’t know what they were asking. She said the police officers hit Mendoza with a piece of tube first before shooting him.

Charlyn Mae Cham, an orphan whose parents were killed, was also present in the briefing but was not able to gave a testimony.

Villanueva helped Sarah, Pauline, Charlyn, and other drug war widows and orphans to exhume their loved ones and prepare them for cremation to give them a dignified final resting place because they were in danger of being evicted from the cemeteries. The priest also gave financial assistance to the families to help them send their kids to school.

Before cremation, Fortun, one of only two forensic pathologists in the Philippines, redid their autopsies. She said her work showed findings that contradicted what the police reports and death certificates declared as the causes of deaths of the victims.

Watch the full program on Rappler.