Screenshot from House of Representatives video

Citing findings from a report by the Commission on Audit (COA) to the House of Representatives, Deputy Speaker Eddie Villanueva said on Monday, September 27, that about P14.4 billion worth of supplies from pandemic contracts already awarded have yet to be delivered to the government.

Villanueva said that of the total amount, COA’s report showed P44.3 had been obligated, though just some P29.9 billion so far been delivered.

“Ano po ang kondisyon ngayon ng P14 billion na iyon? Nasaan po iyon? At bakit hindi nagamit? (What’s the condition of that P14 billion now? Where is that? And why hasn’t it been used yet)” Villanueva asked.

The House has so far mouthed the line of the Duterte government in countering the Senate’s probe. In an earlier hearing, the House panel said that Senate hearings were held “in aid of election, not in aid of legislation.” 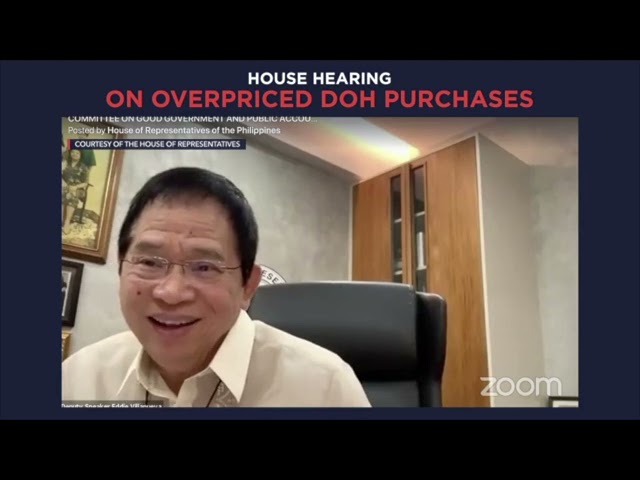 The question, however, was ultimately left hanging on Monday, after health officials were not ready with detailed answers, while the COA said auditors were reviewing a DOH report on updates recently submitted to the agency.

COA Chairman Michael Aguinaldo said he expected some changes in the P14 billion figure to have taken place. “There are likely subsequent changes since DOH submitted updates to COA’s observations,” he said in English and Filipino.

DOH Director Rowena Lora, meanwhile, only answered that with the COA’s report based on findings as of the end of 2020, “it might be that from January to June mayroon na rin pong deliveries yan (there are probable already additional deliveries).” Lora said the DOH would submit a report to lawmakers with more details.

The PS-DBM, an attached agency of the DBM, functions as a buying-agent for government agencies for common-use supplies. It also acts as a shop for common-use items like ballpens so agencies agencies could buy these from them at a low price.

In the early months of the pandemic, the DOH hired the services of the PS-DBM and transferred huge sums to the agency to procure on behalf of the department as it was crippled by a lack of manpower and the magnitude of responding to the health crisis.

It was not immediately clear which firms and items were covered by the undelivered amount of P14 billion.

At a recent hearing in the Senate, an internal audit ordered by ex-DBM chief Wendel Avisado showed that, Pharmally Pharmaceutical Corporation – a firm that bagged the biggest amount of pandemic contracts so far – has been consistently delayed in its deliveries so much so that damages have already been charged against it.  – Rappler.com