Aquino's bitter rival in the 2010 presidential race doesn't think so.

Sen Manuel "Manny" Villar Jr warned against political persecution of Corona in an exclusive livestream interview on Rappler’s #TalkThursday on March 15. For the first time since his loss in the 2010 elections, Villar talked politics, impeachment, and business with Rappler CEO and Executive Editor Maria Ressa. (Watch the full interview below.)

Villar said he supports the President’s anti-corruption campaign but asked whether or not removing Corona from office is the right approach.

“I really expect [public officials] to be honest. I know they should be honest but somehow the system has created all of these things. But my problem is that if everybody in the system does it and then you pinpoint somebody, that’s difficult. That might be persecution.”

Villar said if the prosecution panel is running after Corona for his income, the same income “must be the income of all the justices, and the justices before them.”

He agreed that government should change wrongdoing that has become accepted practice but wondered how.

“I’m just saying your problem is how to change [the system]. If you want to change it by pinpointing one or two, that could be right, that could be wrong. I don’t know that’s why I listen to the trial.”

The former Speaker who led the impeachment of then President Joseph Estrada now sits as one of the 23 senator-judges who will decide Corona’s fate. Aquino has pushed for Corona’s impeachment and calls for his conviction.

SPEAKER TO JUDGE. Villar takes a different role in the Corona impeachment trial but the ghost of impeachments past still haunts him.

Villar said that if the President really wants to live up to his campaign promise to fight corruption, he cannot forego economic growth.

“I think the President is doing the right thing going after these people and fighting corruption. I’m with him in this fight. I’m just saying that what makes this difficult is that this is not accompanied by salary increases and better equipment at iyang mga ganyang bagay, ay talagang napakahirap (and those other needs, then it will be very difficult).”

Villar stressed that strong economic growth is the only sustainable approach to fighting corruption.

“Because when there’s an improvement in the economic conditions, then we can give higher salaries to people, to government employees and we can improve services. More people will give taxes. We can provide more employment .... There will be a lot more income.”

In 2010, Villar campaigned on a promise to pursue economic growth, banking on his managerial skills and experience as a self-made businessman-politician. Since his loss, he kept a low profile and focused on his real estate business instead.

Asked what he would have done opposite to the administration had he won, Villar said, “I would have hit the ground running and I would have tried to maintain the GDP growth rate.”

“I’ve always felt that we need to maintain a 7-8% GDP growth for 6 years continuously to reduce significantly poverty."

‘Vote will be political’

Even after Villar turned to business, he maintains political clout as president of the Nacionalista Party (NP).

“We see each other almost every week, we have meetings and as much as possible, we want to vote together but I think for something as important as this (the impeachment trial), even I as President will tell them that you follow your conscience.” 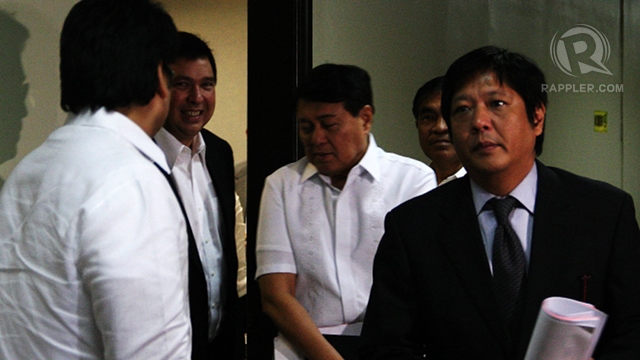 VILLAR'S PARTYMATE. Sen. Bongbong Marcos is part of the Nacionalista bloc in the Senate. Villar says members of the bloc will vote according to their conscience.

The former Senate President refused to speculate on whether senators will vote to acquit or to convict Corona but gave arguments for either side.

The same view was also expressed by the Chief Justice earlier that day in a speech warning of a “one-man rule.”

Villar said that those who will convict Corona will side with Aquino and will see the impeachment trial as an important step in his fight against corruption.

The senator-judge said many factors are at play in the impeachment court’s decision, politics being one of them.

Memories of the first impeachment are still fresh in Villar’s mind. During the trial on Monday, March 12, it seemed old wounds were reopened when Villar had a heated exchange with Sen. Jinggoy Estrada.

Villar took the podium after Sen. Estrada said that his father’s impeachment was similar to Corona’s because they were both railroaded. Villar disputed this, saying the Estrada impeachment stemmed from Senate hearings and passed through the House Justice Committee.

The former Speaker, though, told Rappler that he did not get mad at Sen. Estrada.

“I just felt I had to explain it. It was nothing personal. Parang naisip ko lang na oras na rin para malaman ng tao kasi ang laki ng sinacrifice namin nooh eh parang nati-trivialize naman masyado.” (I just thought it was high time people knew about it because we sacrificed a lot and it seemed to be trivialized.)

“It is very difficult to sign and impeach a president. You know when you sign an impeachment complaint against a president, you can lose everything.” 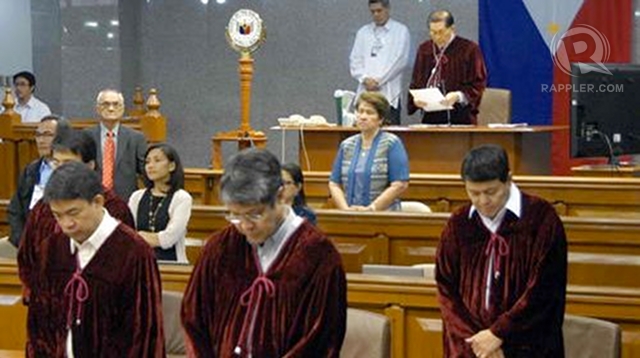 THEIR JUDGE. Villar says history will judge the Senate on the Corona impeachment trial.

‘History will judge the Senate’

With the Corona trial halfway finished, Villar said he still does not know how it will end. He only wants people to view it as fair.

“If we convict the Chief Justice, I hope that we will not look back to this day or this time and say it was our fault that’s why our institutions were destroyed.”

“But on the other hand, if we acquit and the Supreme Court remains to be, assuming they’re biased, I don’t want us to be blaming ourselves because we had the chance and didn’t do it.”

The veteran of the Estrada impeachment said he just wants to be able to sleep soundly at night, knowing the Senate made the right decision.