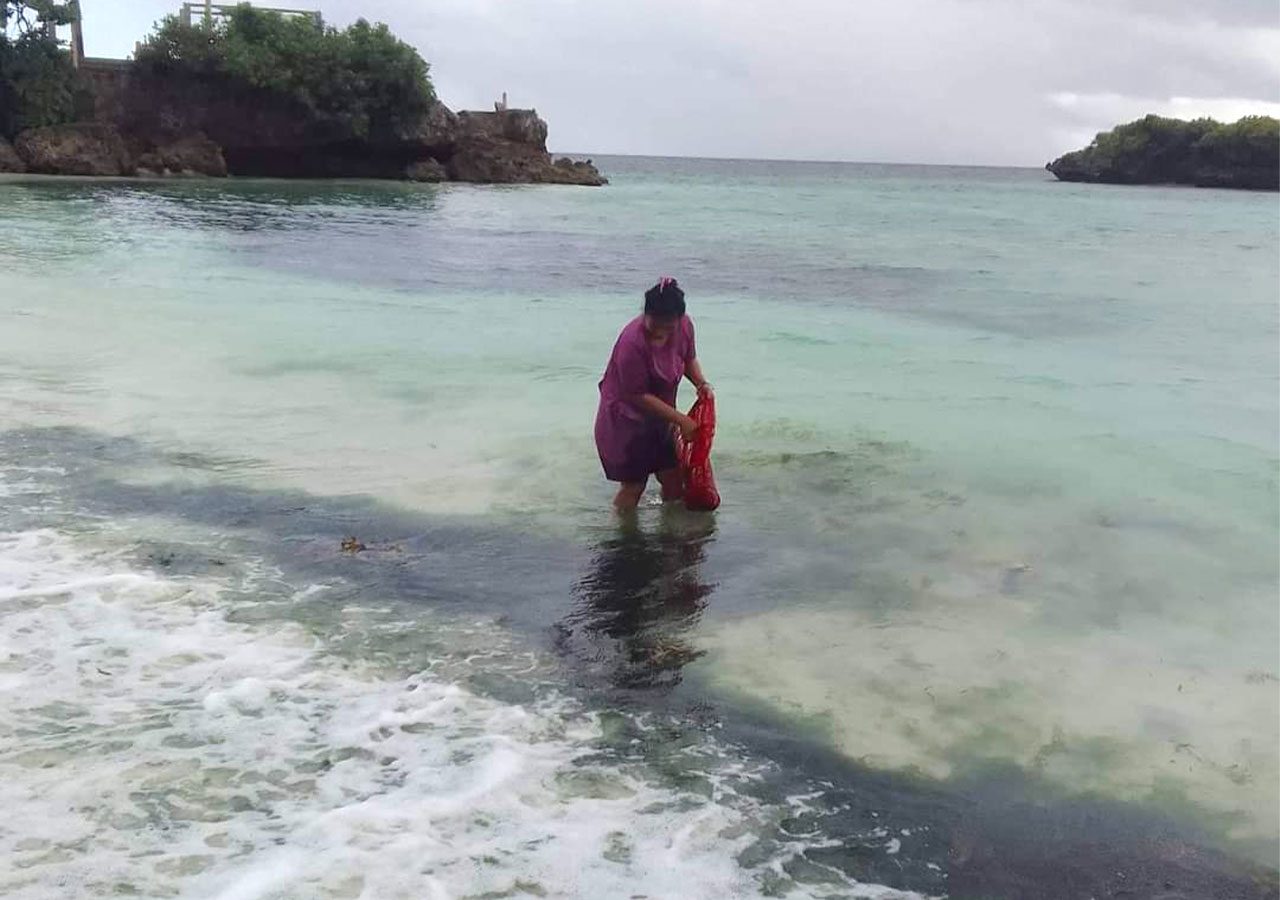 INCOME STREAM. A small group of Boracay island residents are now harvesting the algal bloom around the tourist island and earning income for clearing the beach.

Facebook Twitter Copy URL
Copied
Algal bloom on the water and beach of the famous Western Visayas resort island has long been a source of controversy among residents, tourists, and scientists

AKLAN, Philippines – The algal bloom on the water and beach of the famous Western Visayas resort island of Boracay could provide local women and fisherfolk additional income during the Christmas season and the first quarter of the year.

Maria Ninfa Desiree Segovia of the Boracay Women’s Producers Cooperative (BWPC) told Rappler in an interview on Wednesday night, November 23, that a Luzon-based trading company has reached out to them for partnership in the harvest of the green algae.

Algal bloom has long been a source of controversy among residents, tourists, and scientists.

“The trading company has offered to buy the gathered green algae at P5 per kilo. It is small, but we hope that somebody could offer us a better alternative in the future,” said Segovia, referring to downstream production methods that could improve income levels.

She told Rappler that initial operation involves ten fishermen and ten women coop members harvesting the algae and then drying this, before turning it over to the trading company.

Each of group’s member can harvest 100 kilos daily, for a P500 income. That’s how much algal bloom there is around the island.

But the group, she said, faces a problem – culture and unresolved questions about the algal bloom.

Segovia said many residents of the island “believe that the green algal bloom helps in creating the fine white sand.”

“So as not to create misunderstanding, we deem it proper not to harvest green algal at the front beach,” she said. The group harvests algae on the less populated “back end” of Boracay.

Scientists and travel firms see the algal bloom as a bane on the pristine white sand and blue waters of Boracay. They call it a sign of the over-development and pollution that prompted then-president Rodrigo Duterte to close down the island for six months in 2018.

A Harvard study also cited data that showed coliform level dropping from 1 million to 18.1 MPN per 100 mL after the rehabilitation of Boracay.

But some sectors say algal bloom has always appeared during the year’s dry season, even when Boracay was known only to Malay locals and a handful of backpackers.

Daligdig Yap Sumndad, currently a councilor of Malay town, which has administrative control of Boracay, had thought of making the algal bloom part of the island’s attraction in 2017.

That year Sumndad organized a lumot festival to supposedly relieve locals’ memories of the 1970’s, when Boracay was not yet a popular destination.

Families waded into algae-full water to swim. They even gathered the algae to form into balls as another form of fun.

The subtext was clear: that algal bloom is a natural occurrence, present before tourists discovered the island.

The festival died the following year because of Duterte’s 2018 closure order.

But it presented a perspective that the local indigenous Ati believe in, as their ancestors have always seen the green aquatic clumps as a sign of summer.

The algal bloom usually occurs in Boracay at the first quarter of the year, a dry period, though it has shown increasing cover in late November and December.

“This is non-toxic and should not be a cause for concern,” Despi said, reassuring tourists that the island’s water is clean and safe for swimming.

But scientists don’t see the algal bloom as an issue to shrug off.

“Green algae should be taken seriously by the residents and tourists,” Raymond Sucgang, head of the Nuclear Analytical Techniques Application Section head  of the Department of Science and Technology-Philippine Nuclear Research Institute (DOST-PNRI), told Rappler in March 2022.

On November 23, Sucgang reiterated his warning.

“I have conducted scientific research on algal bloom in Boracay and am convinced that it is a manifestation of environmental decay in this resort island,” he stressed.

The algae, he said, is not among the reasons for the presence of white sand on Boracay.

Harvesting the algal bloom is a good idea as “it is good as feed for fish and as fertilizer,” the scientist said.

The algae, he said, is not among the reasons for the presence of white sand on Boracay.

But while the harvest could provide some income to poor residents, the scientist said it does not address the roots of continuing pollution on the beautiful island.

Even before the Duterte closure, officials of the Department of Environment and Natural Resources already singled out the “proliferation of green, slimy algae” along the island’s famous shoreline as a  sign of serious pollution issues.

Even in 2013, divers and snorkeling experts were already warning that pollution had killed 90% of local coral reefs, requiring a trip to other islands to get colorful underwater views. 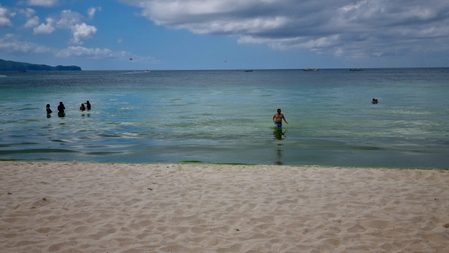