Exactly a week after beginning vaccinations for senior citizens, Cebu City temporarily halts vaccinations as supplies have already run out.

“The Cebu City Vaccine Operations Center will not be vaccinating in its 3 sites on Monday, April 26, because no new supplies have arrived,” the Cebu City Public Information Office said in a Facebook post.

The city only began inoculating senior citizens on Monday, April 19.

“We encourage everyone not to go to the vaccination sites and wait for the announcement for the next schedule of vaccinations,” they added. Cebu City currently has 3 vaccination sites running at the Robinsons Galleria, SM Seaside, and University of Cebu’s Banilad campus.

Local health officials, however, do not know exactly when new vaccines will arrive.

The DOH’s central office said earlier Monday that it is replenishing the vaccine stockpile of local government units (LGUs) within the day. They did not specify which LGUs would get their vaccine stocks replenished first.

Malacañang earlier attributed the delay of a new stock of vaccines to “paperwork.” In Cebu City alone, only 4,924 senior citizens – or 5.6% of eligible seniors – have received their first dose of Sinovac out of the total 88,000 senior citizens on the master list.

As of Monday, the region has received 178,560 vaccine doses.

Loreche said they are expecting to get doses of Johnson and Johnson, Pfizer and Russia’s Sputnik V, which were all previously granted emergency approval by the national government. 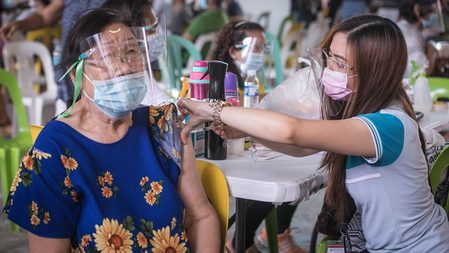 Separately, the Cebu City government’s order of Astra Zeneca and Novavax is expected to arrive in July or August. These vaccines were purchased through a tripartite agreement with the national government worth P200 million.  – Rappler.com