CEBU CITY, Philippines – It was the second attempt of Mark Kenneth Baguio, an information technology student at the Asian College of Technology in Cebu City, to seek cash aid from the Department of Social Welfare and Development (DSWD).

He had incomplete requirements during his first try to get aid from the DSWD. With complete documents this time around, he was able to get his payout in less than an hour.

Baguio made an effort to return for the DSWD aid so he could help his family. He recently resumed face-to-face classes after two years of online courses due to pandemic, which means his family has to shoulder additional expenses for his daily commute as well as his meals while at school. 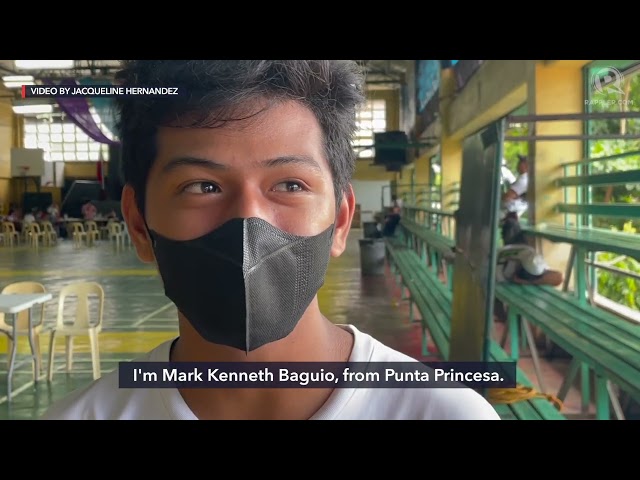 “This is a big help for my family,” Baguio told Rappler in Cebuano after receiving his financial aid on Saturday, September 24. “I’ll use it to help pay for my tuition and other expenses like buying rice or food for my family,” he added.

Baguio and other students have returned to face-to-face classes as Filipinos cope with rising costs of goods. Pressed by the need for cash aid, thousands crowded outside DSWD’s central and regional offices on August 20 to avail of the agency’s education assistance but lack of preparation and logistical problems marred the activity.

The DSWD had since sought the help of the Department of the Interior and Local Government on distributing the education aid, paving the way for an orderly payout later on.

Andrenaline Jacaba, a mother of two college students, made it to the last scheduled payout under the DSWD’s Assistance to Individuals in Crisis Situation (AICS) on Saturday, September 24.

The situation at the aid distribution site was in stark contrast to the chaos that marked the first payout day in parts of the country.

“Hapsay ra (It was organized),” said Jacaba, who received P4,000 for her child, a tourism major at a local college. She said the amount would help buy her daughter’s uniform and pay for other school fees.

DSWD Central Visayas chief Shalaine Marie Lucero said there were fewer individuals who showed up at the regional office after the chaos of the first payout.

“The improvement has been tremendous,” Lucero said in Cebuano in a phone interview with Rappler.

“From the beginning when people were crowding to get their assistance, we were able to control the situation after the online registration system was implemented,” she added.

She said they also worked with the barangay officials to go house-to-house to help register eligible beneficiaries of the program.

At CCSC, there were three stations that checked the requirements of parents and students claiming their financial assistance on September 24. The DSWD said a total of 84,000 students claimed almost P201 million in assistance on September 24. A total of P1.6 billion has been distributed to over 600,000 indigent students since the first payout, exceeding the DSWD’s target.

In relation to an additional payout day, Lopez said in Filipino: “This would not be impossible if there are available funds remaining. But we have to inform them that this will still go under evaluation and discussion to know if the remaining funds are enough, then we will make an announcement once we have assessed this.”

With the resumption of face-to-face classes, government cash aid has become a lifeline especially to poor families who send their children to school.

IBON Foundation noted that government cash aid, in general, has been “slow, too little, and only for a limited number of beneficiaries,” calling the government’s cash aid program “token ayuda.”

“While helpful to those able to receive these, these subsidies however are not enough and must reach many more Filipinos in need,” IBON said.

The DSWD has said that it seeks to improve the delivery of social services through its proposed P196 billion budget for 2023. The DSWD is seeking P115.6 billion for its conditional cash transfer program, also known as the Pantawid Pamilyang Pilipino Program or 4Ps.

Progressive groups in the House of Representatives slammed the lack or insufficient funding for programs on social amelioration, production subsidy for farmers, wage subsidy for small businesses, and fuel subsidies for drivers under the proposed 2023 budget. (READ: House passes proposed P5.268-trillion budget for 2023) – Rappler.com