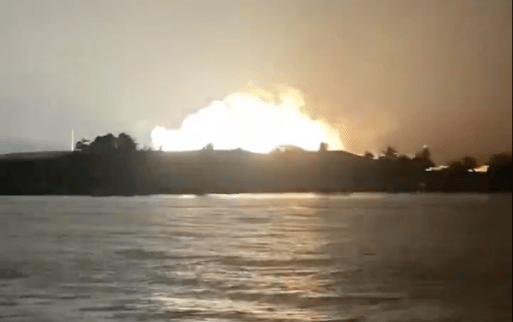 EXPLOSION. Screengrab from a video taken by Bacolod resident Sunshine Gonzales, from the city’s bay walk at around 12:56 am on October 15, 2022.

Screengrab from video of Sunshine Gonzales

BACOLOD, Philippines – An explosion and blaze sparked by a malfunction at the Central Negros Electric Cooperative (Ceneco) reclamation area feeder cut off power in this city and a large swathe of Negros Occidental and the whole of Panay Island in the early hours of Saturday, October 15.

A few minutes before 1 am, videos popped up on social media showing an explosion and fire at the margins of the reclamation area that hosts the port. Shortly after, power went out in much of the city.

Sunshine Gonzales, who took the video from the city’s bay walk around 12:56 am, said she and her companions initially mistook the explosion for fireworks but saw the thick smoke billowing from the area after the explosion.

Nobody was injured in the incident, the Bureau of Fire Protection (BFP) said in an initial report.

It placed the blaze not at the BREDCO port, as Rappler earlier reported, but in Purok Malipayon, Barangay 35, a village on the reclamation land boundary. The BFP said it originated from the automatic circuit recloser covering the Ceneco Reclamation Feeder 5.

Power utility firm Central Negros Electric Cooperative (CENECO), in an advisory, said the power went off at 12:58 am.

It cited “activation of protective equipment due to transient fault’ as the reason for the loss of power in the affected feeders 69 KV Bacolod-Silay, Bacolod-Reclamation, Bacolod-Bata, Bacolod-San Enrique, and Bacolod-Alijis-Murcia.

The power utility firm caters to the cities of Bacolod, Bago, Talisay, and Silay, and towns of Murcia and Salvador Benedicto.

In a 2:30 update on the restoration of power in the Burgos and Mt. View Feeders and Hilangban feeders, Ceneco said the reason for the power outage was the “damaged recloser and power cables of Reclamation Feeder 5.”

The National Grid Corporation of the Philippines  (NGCP) said the incident at Bredco also tripped its transmission grid in Panay.

In an advisory, the NGCP said the whole of Panay and portions of Negros Occidental were affected.

Past 3 am, the Iloilo Electric Cooperative III, announced that power had been restored to its area of coverage.– Rappler.com