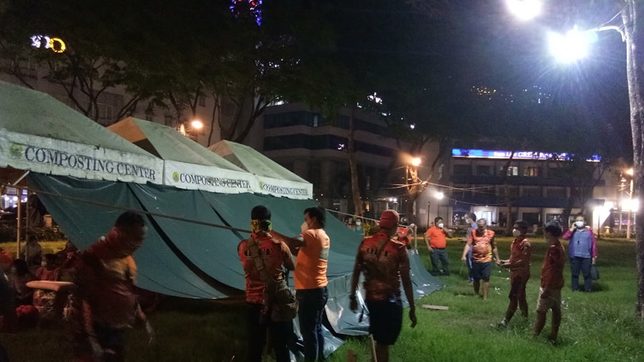 TEMPORARY SHELTER. City workers set up tents in Fuente Osmeña to provide temporary shelter for families of patients confined at the VSMMC

Dozens of family members of patients confined at the Vicente Sotto Memorial Medical Center (VSMMC) in this city have camped out at the Fuente Osmeña Circle, as they are not allowed in the hospital as a safety precaution against COVID-19.

Cebu City Mayor Edgardo Labella has provided tents and portalets to the group at Fuente Osmeña – a park in the middle of a roundabout – after he learned about them.

Since June 9, VSMMC has strictly implemented the “no watchers and visitors” policy as a protective measure against the transmission of the coronavirus disease.

As of July 21, VSMMC has a total of 97 COVID-19 patient admissions. The hospital is also a national sublaboratory for COVID-19.

Being the only Level III hospital in the island, VSMMC caters not only to patients from Cebu City but also from different local government units in Cebu and even neighboring islands.

The strict border control in Cebu City, which is still under modified enhanced community quarantine (MECQ), has made made it difficult for patients’ relatives and caretakers to look for a place to stay, especially those who cannot afford to rent spaces in the city.

In a Facebook post on Wednesday, July 22, Labella said he directed the city’s Department of Public Services to put up tents and portable toilets in the park for the watchers. He added that they have also been provided food by the city government.

“I understand the decision of the hospital to adopt a ‘No Watchers Policy’ as a precaution against the spread of COVID-19 but it has left a lot of people without a place to stay,” the mayor said.

SunStar Cebu, on Tuesday, July 21, posted a photo of watchers on cardboards as their makeshift beds.

The Freeman earlier reported that Cebu City Administrator Floro Casas will meet with representatives from the Cebu provincial government to discuss food provisions for the watchers, and setting up more tents and portable toilets, among other logistical issues. – Rappler.com