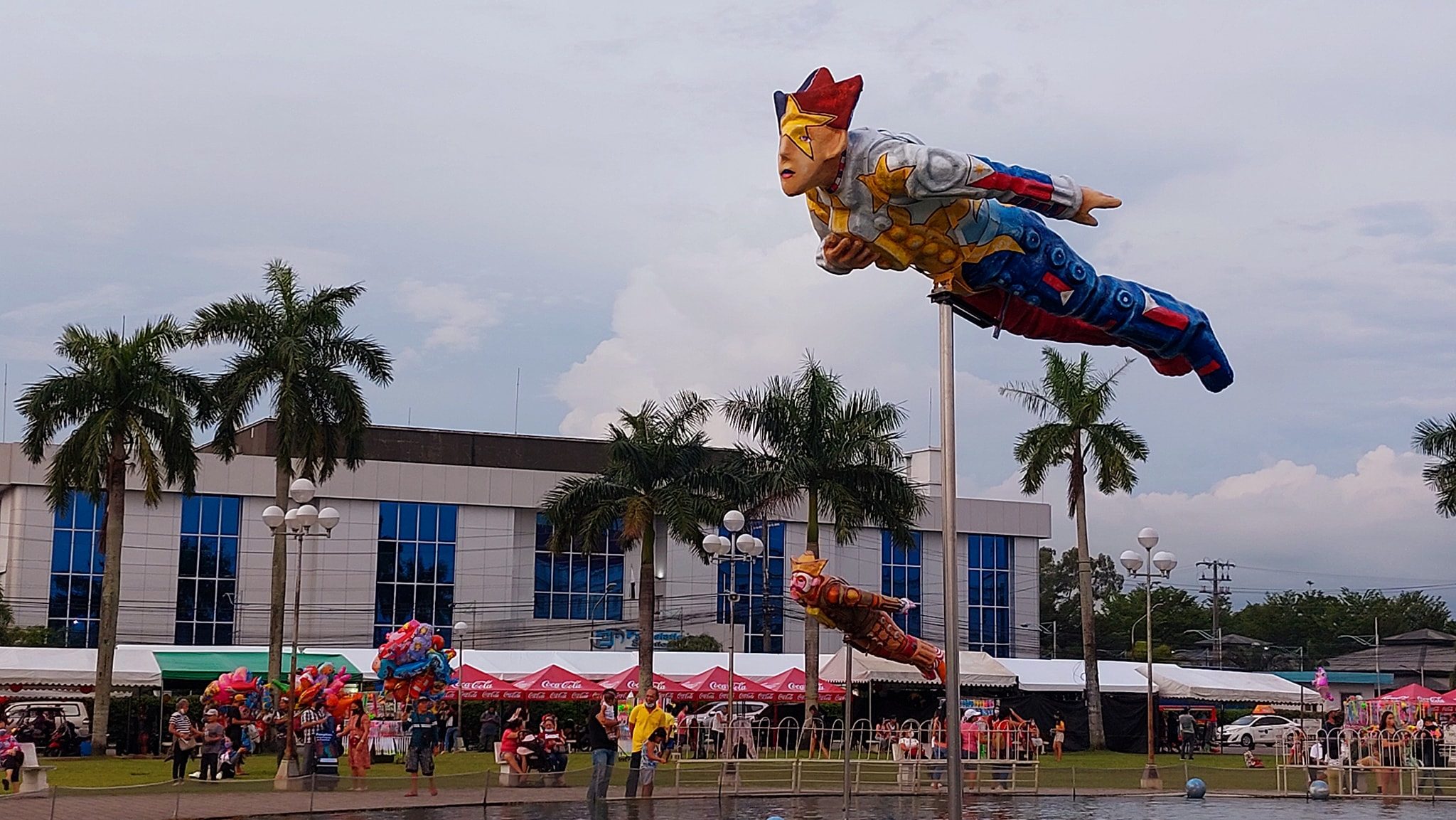 BACOLOD, Philippines – Superheroes and nationalism take center stage on Friday, September 30, at the kickoff of the Masskara Festival, a main tourism draw that is returning as a street spectacle after a two-year ban on mass gatherings due to the COVID-19 pandemic.

Artists led by Charlie Co have crafted an installation made up of six flying figures for the 43rd MassKara Festival, which starts with a 4 pm Salubong at the Bacolod Government Center (BGC).

Rico Blanco, one of the founding members of the Filipino rock band, Rivermaya, is the main star of a program that culminates in a midnight fireworks display.

A 20-kilometer bike fun ride that starts from the BGC on Saturday morning, October 1 is expected to draw around 2,500 participants 15-years and older, according to festival director Pinky Mirano-Ocampo.

The installation art, “Soaring High: The Power of Imagination” was conceptualized by Co, who also painted the central figure.

The installation celebrates overseas Filipino workers (OFWs), Co said. The theme of resilience also pays honor to medical frontliners who risked their lives during the pandemic, he added.

“It is reminiscent of the OFWs who are facing the unknown when they decide to leave our country to provide for their families. Yet, through perseverance and sacrifices, they’ve made it,” the artist said.

“We are bringing this message home: That with imagination, with resiliency and with our talents, Filipinos can make it on the global stage,” Co pointed out, noting that he was inspired by Filipino workers in Dubai during the 2021 World Expo.

The lead flying figure is distinct from the pack. Co painted his suit with the colors, and the stars and the sun of the Philippine flag and Benevente sculpted him with right hand across his chest.

“I wanted to highlight the spirit of nationalism among us,” said the artist, referring to the traditional gesture that accompanies the singing of the national anthem “Lupang Hinirang”.

Artists taking center stage at the festival is a return to its roots in 1980.

The late Bacolodnon artist Ely Santiago coined the word “Masskara” to combine mass (a multitude of people), and the Spanish word cara (face).

The Mardi Gras-type masks that have become popular tourist souvenirs in their mini versions were conceived to bring back smiles to the capital of Negros Occidental.

The province in 1980 was in the throes of an economic crisis brought on by collapse of world sugar prices and massive corruption by the cronies of the late dictator Ferdinand E. Marcos who controlled the state’s sugar trading monopoly.

It was also grieving for the many Negrenses who perished when the inter-island vessel MV Don Juan sank off Mindoro after it collided with a tanker.

The two-year lockdown brought about by the pandemic forced the closure of many businesses in the province and its independent-administered capital, laying off at one point an estimated one half of Bacolod’s labor force.

The first Masskara festival was mainly focused on the City’s Charter Day celebration on October 19, 1980.

It has since morphed into an almost month-long festivity showcasing the province’s culinary delights and lots of alcohol – a mix of Germany’s Oktoberfest and New Orlean’s famous pre-Lenten Mardi Gras, especially at the peak where towns of the province compete in an explosion of dance, costumes, and floats.

The city and provincial governments have ensured a comeback with a bang by funneling millions of pesos in subsidies to participating communities.

By September 23, 30 villages in Bacolod had signed up to compete in the street and arena dance competition and in the Electric Masskara float and dance-off contest.

The city provided P5.35 million in financial assistance after the Sangguniang Panlungsod approved the memorandum of agreements with the barangays. Villages joining the street dance competition got P200,000 each, while those joining the Electric Masskara received P150,000 each.

Ocampo said a P1-million cash prize awaits this year’s grand champion of the street and arena dance while the winner of the Electric Masskara contest will get P500,000.

The glam and scale of the program that opens this year’s Masskara Festival is reminiscent of Mayor Albee Benitez’s campaign rallies, which tapped the network and resources of his gaming/entertainment business.

It is also a showcase of sorts for post-election unity.

Festival director Ocampo was in charge of the grand campaign rally of then-vice president Leni Robredo, who lost to President Ferdinand Marcos Jr. Co and his fellow artists were also in charge of the giant Star of Hope installation for Robredo’s rally.

Benitez, on the other hannd, was instrumental in making Marcos win in Bacolod, a key opposition center in the months leading to the downfall of the dictator, the President’s father. The Bacolod mayor is the son of Imelda Marcos’ deputy in the Ministry of Human Settlements, Jose Conrado. – Rappler.com