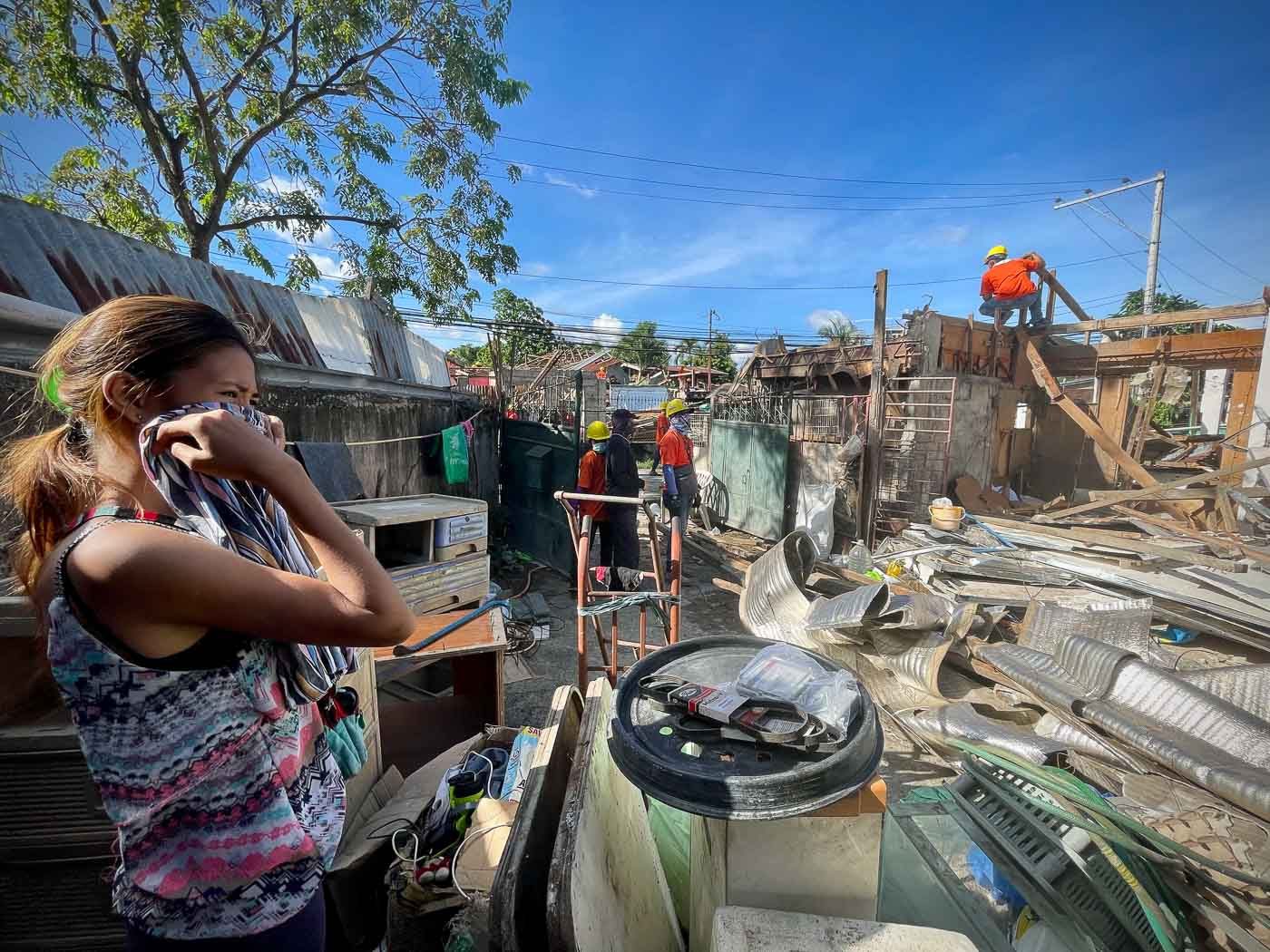 HOMELESS. A resident of Lot 937, Sitio San Miguel, Barangay Apas, Cebu City, watches as a team tears down homes on November 4, 2022, in the village that has housed generations of soldiers and cops.

Facebook Twitter Copy URL
Copied
In 2010, a Cebu City court ruled in favor of Mariano Uy Godinez as the 'absolute and exclusive owner' of the property, where families of soldiers have lived since 1939

Like many others in this small neighborhood, the residence of 41-year-old Baldoza has sheltered generations of men in uniform. The community was established in 1939 around Camp Lapu-Lapu in Barangay Lahug. By 2019, the number of homes had grown to around 200.

“My grandfather, uncle, and cousins served the country – all proud soldiers and policemen,” Baldoza said in Cebuano.

The full-time housewife watched in tears, helpless, as her family’s home was torn apart by demolition teams on Thursday, November 3.

“I had to get myself nebulized because of the stress. It was so difficult carrying our things,” the 78-year-old Ambita said in a mix of English and Cebuano.

Ambita’s family has also lived in the area for as long as she could remember. Now she and her two sons worry about finding money to pay for rent.

One of Ambita’s sons brought some of their personal belongings to a place in Sitio Babag, a 12.4-kilometer trip to the highlands of Cebu City.

Why is this happening?

In a writ of execution dated March 5, 2010, Regional Trial Court (RTC) Branch 9 in Cebu City said Mariano Uy Godinez is the “absolute and exclusive owner of Lot No. 937.”

On May 8, 2013, the Philippine government, represented by the Department of National Defense, filed before the RTC a civil case against Godinez and the Register of Deeds of Cebu City, for the cancellation of the reconstituted transfer certificate of title.

There have been other attempts by the city government, including the late mayor Edgar Labella, and legal counsels of residents, to fend off demolition.

The most recent was the negotiation led by Cebu City Mayor Mike Rama, Vice Mayor Raymond Garcia, and Labella’s son, Councilor Edgardo “Jaypee” Labella II on October 13, when the demolition was supposed to begin.

On that day, some residents who are members of a homeowners’ association – the Archangels Residence Mergence Incorporated (ARMI) – put up a barricade along the road between IT Park and Sitio San Miguel to prevent demolition crew from entering the area.

These homeowners, who had refused a settlement of P150,000 to P200,000 per home, claimed that there were irregularities behind the legal proceedings and vowed to work on an appeal against the demolition.

In 2013, the Philippine Star quoted Rama as saying in Cebuano: “Sometimes, it would just be filed as is. Then, left alone. No work done on the pleading.”

Special Court Sheriff Edilberto Suarin, the implementing sheriff of the execution, told Rappler that the lot owner had granted Rama’s request for a two-week extension of the demolition.

Suarin’s assistant, Sheriff Ernesto Baz, said that roughly 121 structures are up for demolition, with a daily target of 20 residences.

The current owner of the property is Mazy’s Capital Incorporated owned by Filipino-Chinese businessman Alfredo Yao, who founded Zest-O and the Philippine Business Bank. He was also Special Envoy to China for Tourism and Cooperation in 2009.

Former Caloocan congressman Edgar Erice, Mazy’s spokesperson, told Rappler on Saturday, November 5, that the property, which was sold to Yao in 2019, is now valued at more than P1 billion.

“[Godinez] pinakausapan niya si Mr. Alfredo Yao who is the owner of Mazy’s kung puwede bago siya mamatay ay [mabili] para mapakinabangan ng kanyang mga anak at pamilya yung lupa na pinaglaban niya,” Erice said. (He asked Mr. Alfredo Yao if he could complete the purchase so his heirs could benefit from the land he had fought for.)

Erice said the company bought the lot with plans to construct a hotel, condotels, and a BPO firm that would generate jobs and investments for the province.

The former congressman added that the company had been negotiating with residents since 2019.

“We came up with an agreement; a settlement with the leaders but unfortunately, nahati ‘yung group (the group was divided),” Erice said.

Baldoza appeared to be resigned to their fate. “There’s nothing we can do. They say this belongs to someone,” she said in Cebuano. “I hope you are happy, whoever claims this, that you have what you want, even when so many have been harmed.”

“Justice is not for the poor, it’s only for the rich,” Baldoza added.

Rappler spoke to some residents in Lot 937 who said that they did not want anything to do with the money. These residents were part of the homeowners’ association.

“We want due process to defend our stay here as builders in good faith,” ARMI president Anne Martel told Rappler.

Baz, however, told Rappler that there is sufficient evidence to prove that the plaintiff, Godinez, had rightful ownership over the lot.

“This took years and when the decision from the court came out, the plaintiff really won,” he said.

It is not clear if all the houses are still owned by the families of the original soldier and police owners, or if some had been sold to new occupants.

Since the second week of October, the Cebu City Council, through its Division for the Welfare of the Urban Poor (DWUP), has been assisting residents affected by the demolitions at Lot 937.

According to the department, a number of relocation sites have already been listed. Residents who do not yet have new homes can be accommodated in one of the city’s socialized housing sites.

The mayor’s secretary, lawyer Collin Rosell, told Rappler on November 3, that the city would continue to find ways to provide aid to affected families, either through DWUP or the city’s Department of Social Welfare and Services (DSWS).

For now, residents like Ambita and Baldoza wait for help to come their way. – Rappler.com