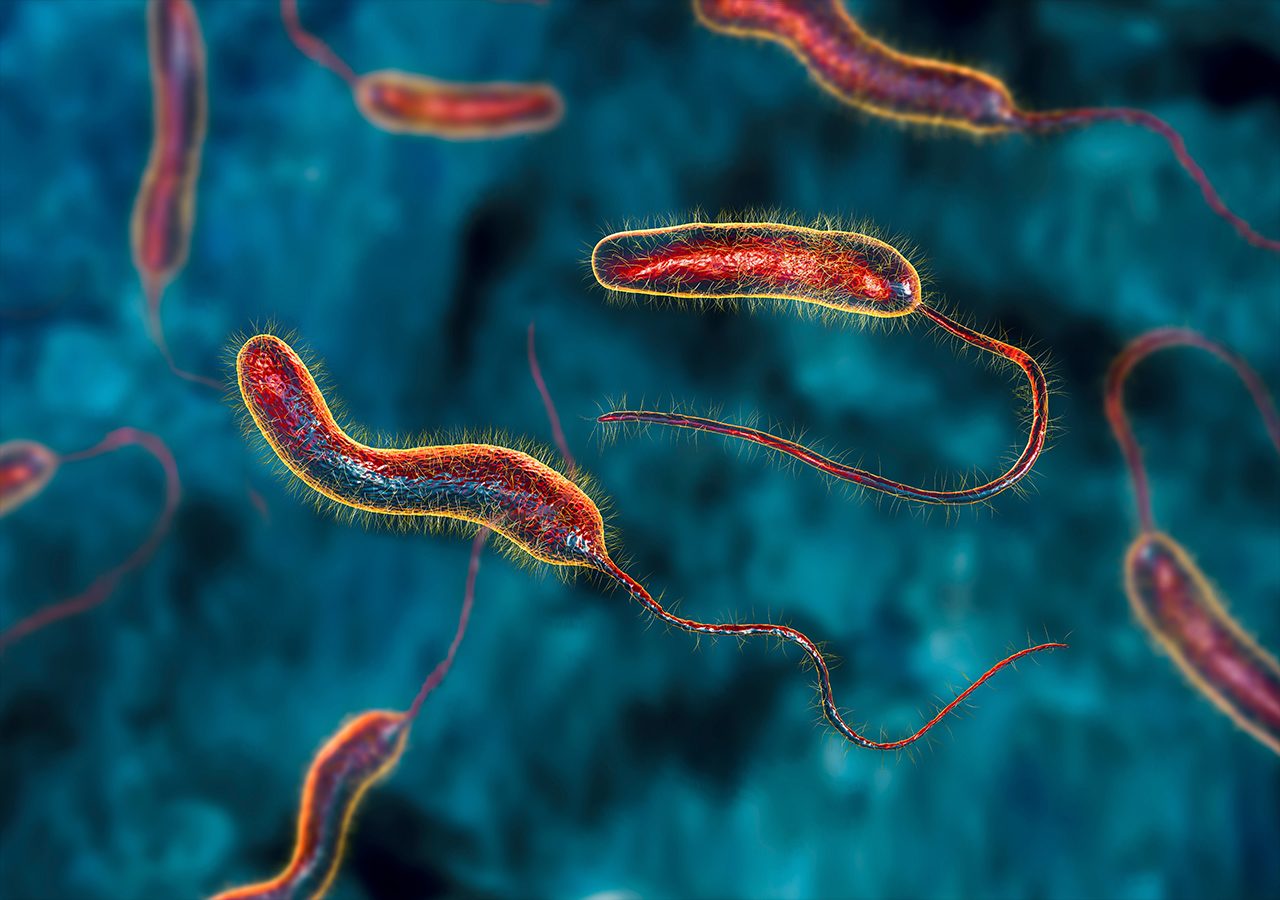 DEADLY GERMS. A 3D illustration of the Vibrio cholerae bacteria, which causes cholera disease and is transmitted by contaminated water. Iloilo City in Western Visayas has confirmed three cases of cholera.

The Iloilo City Disaster Risk Reduction and Management Council (CDRRMC) on Tuesday, August 30, said it has asked city council to approve the declaration of a state of calamity due to rising cases of food and waterborne diseases.

At a press briefing, aired live by the office of Mayor Jerry Treñas, city health officers said laboratories have confirmed four deaths from acute gastroenteritis from July 26 to August 28, with a total of 90 cases of reported around the city.

Dr. Marigold Calsas, head of the City Epidemiology and Surveillance Unit (CESU) said lab results have confirmed three cholera cases, but these have all recovered.

CHO officer-in-charge Dr. Annabelle Tang said the report is worrisome as, “for the past five years we have no case of cholera.”

The CESU is still awaiting results from the Research Institute for Tropical Medicine (RITM) for other 14 other samples.

Calsas said the city health office had recorded 56 viral gastroenteritis cases on August 27. But from August 28 to August 30, Calsas added, 34 new cases were reported, bringing the total to 90.

Viral gastroenteritis, also called stomach flu, often comes from ingestion of contaminated food or water or contact with an infected person. Healthy persons usually recover but the viral illness can be deadly for infants, older adults, and people with compromised immune systems.

Cholera is an acute diarrheal infection caused by ingestion of food or water contaminated with the bacterium Vibrio cholerae.

The World Health Organization considers cholera a global threat to public health –  and an indicator of inequity and lack of social development.

The city council will discuss the proposed declaration on September 1 and the office of the mayor said it does not expect resistance.

The CDRRMC said if the Sangguniang Panlungsod passes the declaration, the city could release P12 million from the quick response fund for medical personnel, supplies, medicines, fuel, and other maintenance and operating expenses.

The acute gastroenteritis (AGE) deaths were spread out, children from Rizal Pala-Pala, Tanza Timawa II and Calumpang, Molo accounting for three, and a 31-year old male in Jibao-an Norte, Mandurriao.

One of the gastroenteritis fatalities, an eight-year old girl, had gone swimming with kin in Barangay Arevalo river and eating bangus and river crabs for lunch, Calsas said.

The following day, she started vomiting and had several episodes of very loose bowel movement.

Despite the child receiving oral rhydration therapy, there was no resolution to the symptoms. She was brought to the West Visayas University Medical Center where doctors declared her dead on arrival.

Councilor Alan Zaldivar posted a breakdown by the city health office of AGE cases, with

The city health office said that in six barangays water samples from 25 deep wells and tube wells and 23 refilling stations, water vendo stations, tap water sources, and a bathhouse were positive for E.coli and coliform or bacteria from human and animal wastes.