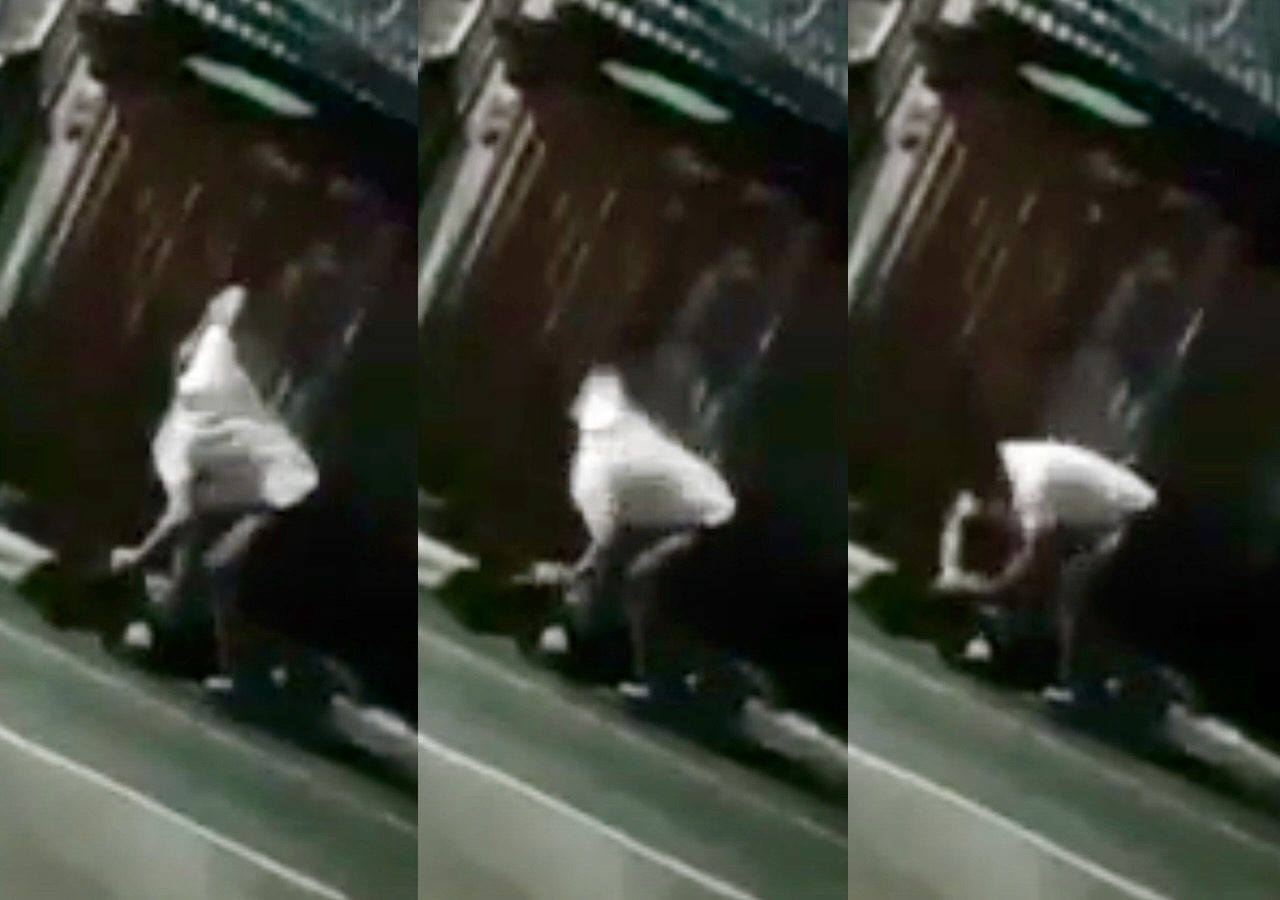 BRAZEN. In full view of commuters, a cop bashes the head of a theft suspect in Maasin City, Southern Leyte on December 11.

Facebook Twitter Copy URL
Copied
(1st UPDATE) One video shows a foot rolling the body of Gilbert Ranes, and then a voice barks in Binisaya to finish him off

The first video posted on Sunday night, December 11, shows a stocky man in a white shirt and khaki pants bent over a body on the pavement. Vehicles wheezed by.

The person taking the sometimes shaky video shot it from across the busy street in Maasin, Southern Leyte. There was enough light to see the action.

The man, aware that he was in full sight of passersby, raised his head a couple of times to check approaching vehicles.

His right leg pinned a body to the pavement. His left hand clutched at the man’s dark shirt.

At the 59-second mark, the man raised his right arm, an object in his hand.

His elbow a foot above his head, the man crashed what he held with full force on the head of the man he stepped on.

The prone body jerked. The assailant roughly pulled it back to position.

His arm slammed down again.

The second video showed a slight man in a well-lit room.

The unconscious man wore dark, low-waist denim pants and a thin black shirt. He lay on his back. Blood had come out of his nose. His eyes were open, blank.

His mask had slid down his neck. An earphone poked out of the mask garter when a foot rolled him over. He flopped like a rag doll, surrounded by black leather shoes.

The Regional Police Command did not respond to Rappler’s calls. But at around 9:49 pm on Monday, December 12, a Philippine National Police source who asked to remain anonymous, as he was not cleared to talk, said the suspect was “under custody already.” Rappler is withholding the cop’s name until an official statement comes out.

In one Facebook post, some 1,000 people tagged Senator Raffy Tulfo’s public account. The senator is one of a gang of brothers idolized by the masses for their instant actions on complaints.

More than 2,400 persons shared the set of videos of the dead man, and a photo of the slain man on a morgue slab, posted by Jerome Maraon Paler. Those thousands also called on the senator.

“You felt no pity, sir? Why finish him off? Isn’t your police motto [to] protect and serve? Why did we hear that from you?” said Paler, addressing the gruff-voiced man in Binisaya, the language spoken by Maasinhons.

Paler told Rappler on Monday that the slain man, Gilbert Ranes, was his cousin.

Gilbert was trying to finish his basic education under the Department of Education’s Alternative Learning System (ALS).

Paler said he does not know who took the videos. A third one shows a group of men carrying Gilbert’s body to a vehicle.

“They treat him like a pig,” one voice spits in Binisaya.

Another cousin said Gilbert used to earn a living fishing in Barangay Ichon, Macrohon town, around 10 kilometers from Maasin. But the catch became smaller and smaller, so Gilbert abandoned that job.

He was also a tattoo artist. He was studious – or he tried to be – although he sometimes cut classes when someone dropped by to ask for ink.

(Editor’s Note: We earlier called the language heard in the video Waray. This has been corrected.)

Speak up, speak out

“The power to enforce the law does not give one the power to be judge, jury, and executioner,” said Gerona.

In a phone interview on December 12, he introduced himself as a congressional staff of Southern Leyte 2nd District Representative Christopherson “Coco” Yap.

Gerona once served as ex-officio councilor of Maasin when he was the local Sangguniang Kabataan chairman.

“I find the official Police Report wanting details as to the background of his arrest and why a suspected thief ended up in the morgue. If it is to be believed that the suspect has been apprehended by bystanders, and perhaps beaten by them, then there is all the more reason to handle the suspect in a much more humane way than what is shown in the video clip. Di man tawn na baboy (That was not a pig).”

Rappler is not publishing the police report until the police confirms its authenticity. If “genuine,” it claims the opposite of what the videos show.

The young lawyer called for a full investigation and for the prosecution of all those responsible for the death of the suspect.

“Let us all rise, if not use our platforms to speak against injustice for as Martin Luther King puts it: ‘Injustice anywhere is a threat to justice everywhere. We are caught in an inescapable network of mutuality, tied in a single garment of destiny. Whatever affects one directly, affects all indirectly.'”

A lecture in defense of the cops

A woman on December 12 spoke up on Paler’s page.

Her message was as polite as it was bizarre, or so Maasin folk thought on the long comment thread that engaged her.

She asked what people who shared the video had done to help the dead man’s family.

The woman said she had previously helped the man’s wife with food, some money, even medicine.

She lectured Paler and other netizens about not judging the police based on the video. She talked of a story behind the event.

Why did he steal? she asked.  Why would anyone steal? Because of hunger, or hardship, maybe someone got sick.

“Isn’t that pitiful?” she asked in Binisaya, going back to asking people if they had aided the dead man’s family in their time of need.

But her next words were an apology for cops.

There was an old person who was victimized by theft, who called out for help.

That cop heard the cry and went to the rescue.

“If we hear a cry for help, will we just stare?”

The cop risked his life, she said. If the thief  had a gun, the cop could have died if he waited for the suspect to act first.

But that didn’t explain why a cop with his foot on a man’s back would bash his head in. Twice.

“Don’t go after [the cops] who were rescuers or we will be among the thieves,” she lectured.

“We will seek justice. But next time someone will ask for help, let’s help so that no one goes hungry and steals.”

On other Facebook threads curses would have been flying.

The Maasin convo was exceptionally polite.

People seemed to know their rights and the procedures to ensure due process.

They argued with extreme politeness, calling the woman “ma’am.”

“The issue isn’t if you helped or not, but how they treated a man they had arrested,” one of Paler’s friend said.

Another cousin pointed out that nobody was destroying the police, just protesting the crime that happened. Even a thief, she stressed, did not deserve that.

Again and again, people came back to “tiwasan.”

Some things, someone said, can’t be unseen or unheard. – Rappler.com