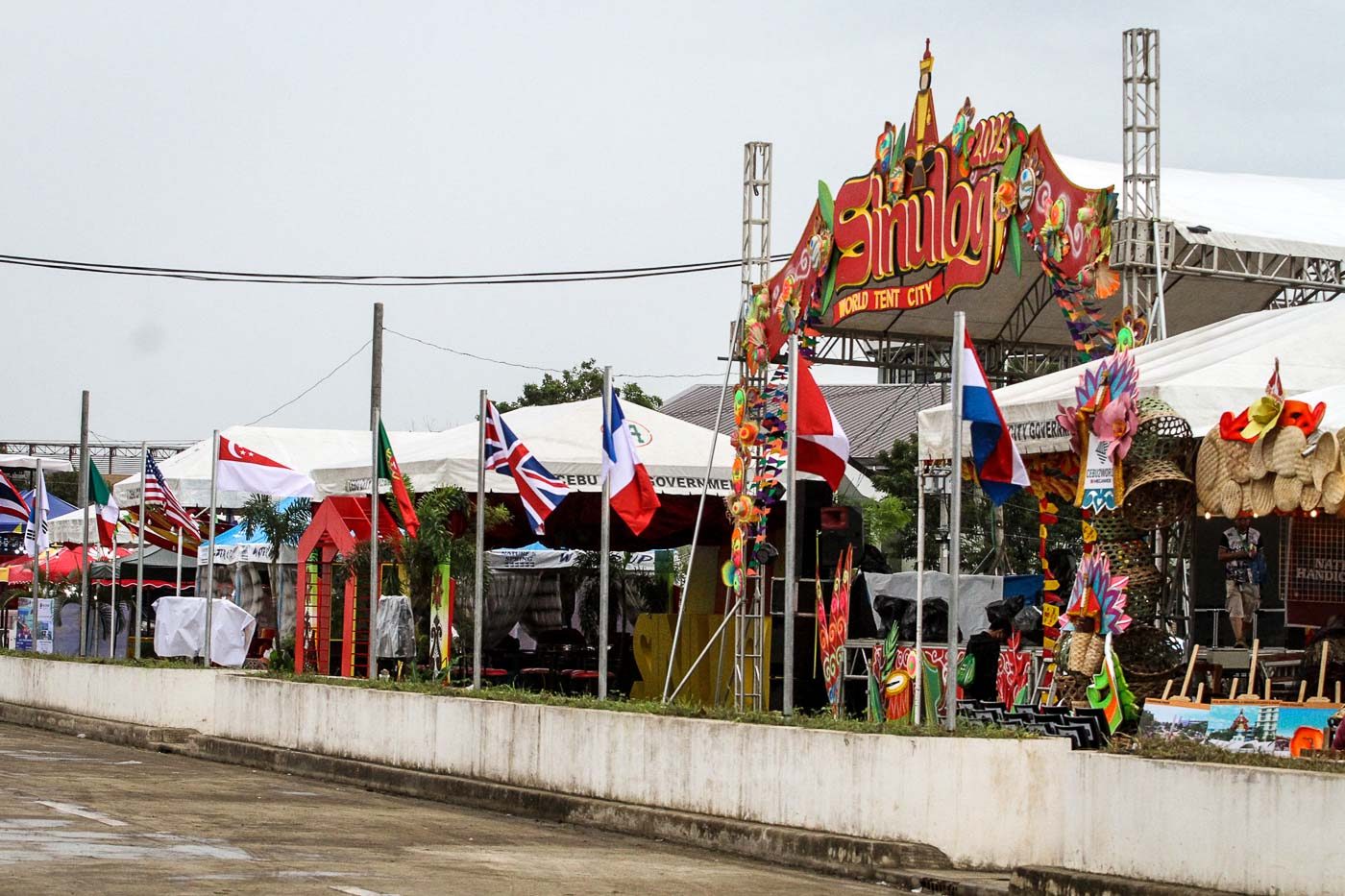 SHOW WILL GO ON. Souvenir wares start to go up in the tents around the venue of Cebu City's Sinulog 2023 grand highlight on Januaury 13 and Mayor Mike Rama says the January 15 event will push through despite the pullout of contingents from the province.

CEBU, Philippines – Only 16 out of 26 groups will join the Sinulog 2023 Grand Festival at the South Road Properties (SRP) on Sunday, January 15.

These 16 groups include three guest contingents from outside Cebu and 13 barangays from Cebu City’s Northern and Southern Districts. The remaining groups are from the following places:

How did this happen?

Both Cebu City Mayor Mike Rama and Cebu Governor Gwendolyn Garcia went back and forth disagreeing with each other on where the Sinulog grand parade should be held.

Garcia believed that the Sinulog should be back to its traditional site – the Cebu City Sports Center.

Rama insisted the venue should be at the SRP where it’s spacious and less likely for revelers to spill into streets.

Amid the rush of preparations and construction work, Garcia pulled out the contingents from the province on Thursday night, January 12.

Two of the three Metro Cebu Tri-cities followed suit, with the obvious exception of Cebu City.

In a press conference on Friday, January 13, Rama announced that Sinulog 2023 would remain at the SRP and push through without the missing contingents.

“Señor Santo Niño will talk to the governor,” said the mayor.

Garcia, however, on Friday night said the 10 contingents that pulled out  will join the Sinulog ritual showdown in Carmen town. They are:

Father John Ion Miranda, the spokesperson of Basilica Minore Del Santo Niño, told Rappler in a phone interview on Friday evening, January 13, that the Church is calling for unity.

“We call for unity, We call for hope, let’s all help each other in our journey towards the celebration for the Santo Niño,” Miranda said.

Alfred Reyes, the president of the Hotel, Resort and Restaurant Association of Cebu (HRRAC), said that the change in venue has had no observable impact on the number of hotel bookings in Cebu.

“No effect at all,” Reyes said in a text message.

Rappler has reached out to Police Colonel Ireneo Dalogdog for a comment on the matter but has yet to receive any reply. This will be updated as soon as he responds. – Rappler.com