What Simbang Gabi means for Cebuanos 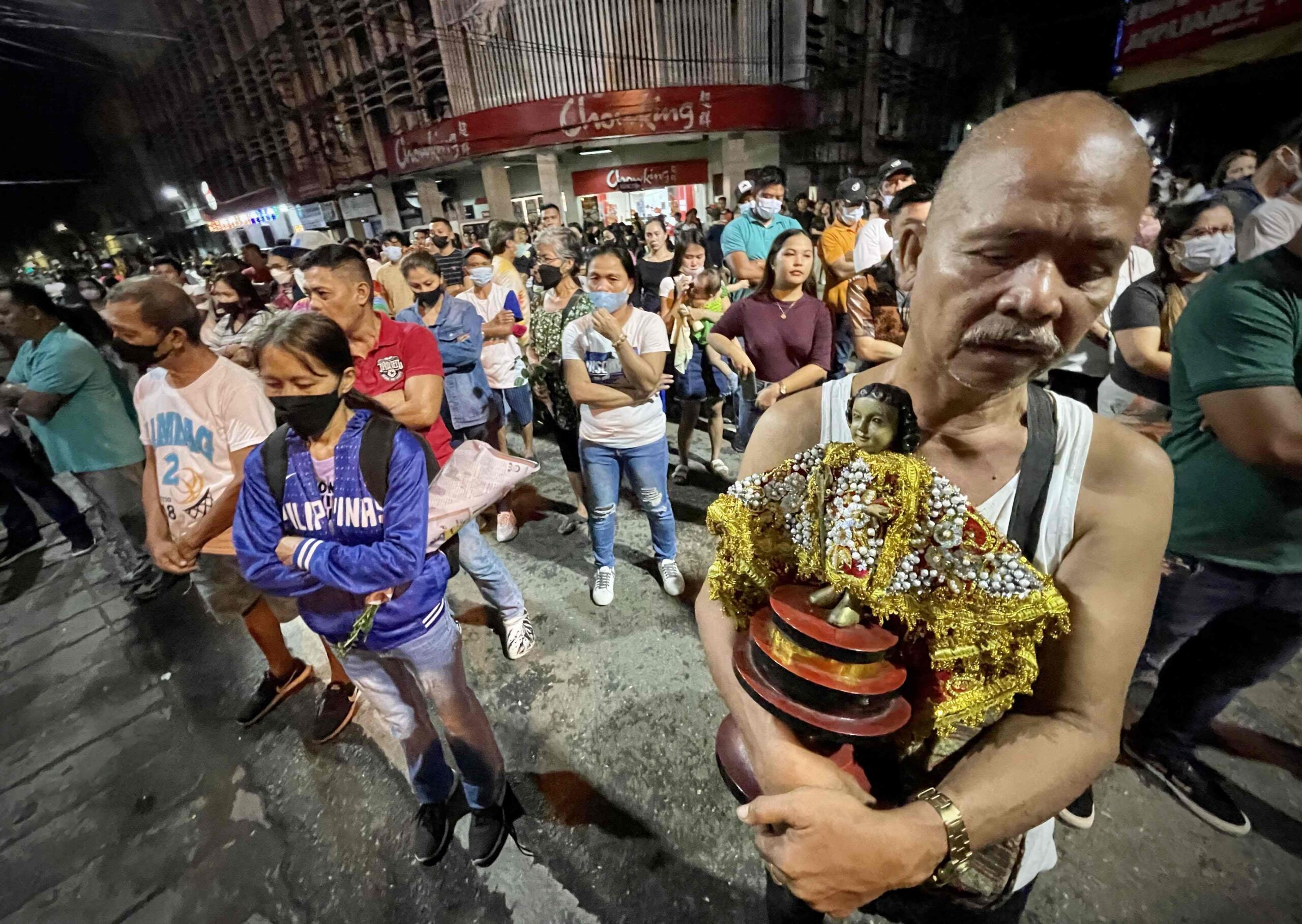 FAITH. Many Cebuano devotees bring their own replica of the Child Jesus when attending Misa de Gallo.

CEBU, Philippines – After two years of being unable to experience in-person mass, over a thousand Cebuanos gather in churches and chapels during Misa de Gallo or Simbang Gabi for true devotion and the continuation of a precious family tradition.

For more than a decade, 67-year-old devotee Noli Tenchavez has had the time of his life volunteering for the Basilica Minore del Sto. Niño de Cebu, the oldest Catholic Church in Cebu, during religious celebrations.

This year, he helps handle the large crowds that come and go to partake in the midnight masses. “It’s devotion, a commitment I have,” he said in Cebuano.

Simbang Gabi is a nine-day Catholic celebration that involves attending midnight mass as a way of showing devotion and is done in preparation for Christmas.

During the earlier parts of the pandemic, health protocols mandated by the national government made it almost impossible to attend mass in person. By 2021, regulations were eased and in-person mass was allowed to at least 50% of accommodation capacity.

However, on December 17, 2021, Typhoon Odette devastated several parts of the country, most especially Cebu City where the Basilica is located.

Tenchavez shared how he had lost his own roof and to this day, is still hoping for financial aid from the government to help cover the reparation costs of the missing part of his home.

(We weren’t able to receive much aid but that’s okay. We keep moving forward)

Tenchavez, who is a retired jeepney driver and a father of 3, believes that if he completes his nine days of Simbang Gabi, blessings will find their way to his family.

The same can be said for Lisa and Edward Tago who can be seen lighting candles at the Basilica and praying passionately for their children and relatives.

The Tagos are honest vendors from Cebu City’s Carbon Market, selling assorted goods and wares in their humble sari-sari store.

“We do this every year and Simbang Gabi has become a tradition for both of us. We stopped for a bit due to the pandemic but he and I are happy to be back,” Lisa said in Cebuano.

For the year 2023, the Tagos family prays for good health to be bestowed on everyone they love and care for.

“Even if it has been a year since Typhoon Odette, we still have plenty of brothers who have yet to recover, struggling through the rain because they have no roofs,” Rev. Father Mark Tampos, OSA, said in his homily on the sixth day of Misa de Gallo.

Despite this, Tampos shared that there are still many Cebuano devotees who come to partake in mass no matter how late in the evening or close to midnight it is.

“We are tired and sleep seems like a great thing and yet here we are. We rise and we prepare to attend mass,” he said.

The proud father believes that the season of Advent and Christmas is truly a time when Cebuanos prepare for joy and celebrate salvation that is Jesus Christ.

“Throughout the challenges and trials we face in life, among others, we become truly content by Christ…even when we do not carry gifts, we still give happiness to our brothers and sisters,” Tampos said.