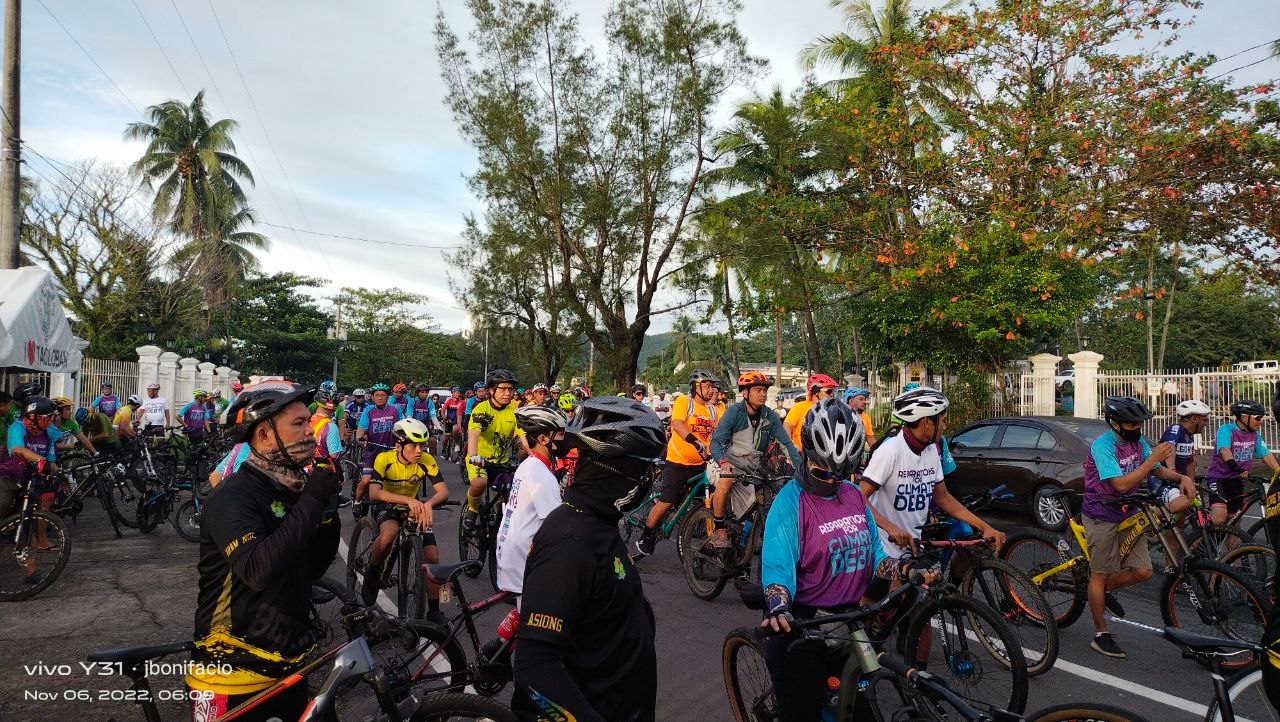 BIKING FOR THE ENVIRONMENT. More than 300 cyclists, mostly survivors of 2013's Supertyphoon Yolanda, pedal together on November 6 to call for more systems encouraging non-motor transport alternatives in Leyte province.

TACLOBAN, Philippines – Bicycle enthusiasts in Eastern Visayas cities and towns hit hard by Super Typhoon Yolanda (Haiyan) in 2013 joined the Pedal for Planet and People activity on Sunday, November 6, to push for systems encouraging the non-fuel, two-wheel mode of transport.

As part of build-up activities for the Tuesday, November 8, commemoration of Yolanda, which killed more than 6,300 and destroyed more than half a million houses, 300 cyclists also used the event to call on rich countries contributing largely to carbon emission to pay reparation to small countries suffering from the impact of the climate crisis.

Environmentalists likewise urged a halt to the land use conversion of the peatlands of the Leyte Saba Basin to forestall the growing vulnerability of the area to the effects of climate change.

Yolanda, which affected more than 3.4 million families in the country, cost the Philippine economy P95.48 billion. By 2016, the Philippine government had listed a P150.03-billion total funding requirement for the Yolanda Reconstruction and Rehabilitation program.

While the global call is for rich nations to step up reparations for their huge carbon emissions, which are among the reasons cited for global warming, environmentalists in Eastern Visayas also pushed the government to lay down systems for non-motorized transport.

During Super Typhoon Yolanda, the bicycle was used as an emergency response transport and a way to reestablish communication among survivors, said Judah Aliposa, a member of the board of trustees of the Firefly Brigade Inc. and private sector representative in the Disaster Resilience Regional Development Council 8.

Aliposa said biking is no longer just a fitness activity. More people have taken up biking as an alternative transport mode to motor vehicles, especially with recent runaway fuel costs, and the government should respond to their needs, he stressed.

“The bicycle is here for good, we cyclists are here for the long run,” Aliposa said. “Magsara man ang lahat, magmahal man ang gasolina, ito pa rin ang bisikleta at hindi na ngangailangan ng gasolina.” (Even when everything shuts down, or the price of gasoline increases, the bicycle will be here because it doesn’t need fuel to operate.)

Leyte Board Member Ronnan Christian Reposar, who also works with the Environmental Legal Assistance Center (ELAC) and biker associations in the province, noted that every kilometer of a bike ride helps reduce road congestion and air pollution.

Reposar said Leyte province, the municipality of Palo, and Tacloban City have passed resolutions on setting up bike lanes and road sharing.

“They are very supportive of this call, but it’s not that easy and they need support from national government agencies, like the Department of Public Works and Highways and the Department of the Interior and Local Government,” he added.

While environmentalists had long warned of global warming, it was only after Yolanda that the national government stepped up discussions on climate change.

“The phenomenon is real – we are experiencing environmental shifts. Like a repeat order, every time there is a storm or typhoon, we will expect flooding, landslide,” the provincial board member said.

“We can’t just stop with rescue and relief,” Reposar stressed, noting that the Leyte Saba Basin Peatland (LSBP) – which includes the towns of Palo, Santa Fe, Alang Alang, and San Miguel in Leyte – has a large carbon sink in a region vulnerable to the effects of climate change.

A carbon sink is anything that absorbs more carbon from the atmosphere than it releases – for example, plants, the ocean, and soil.

In April 2022, the Forest Foundation of the Philippines warned that land use conversion in the LSBP, an area of more than 2,100 hectares, has reduced its ability to store carbon.

“Peatlands are highly effective carbon stocks. They cover only 3% of the land but contain more carbon than the entire forest biomass of the world,” the foundation noted.

The LSBP, in the northeastern portion of Leyte Island – which covers the municipalities of Alangalang, Santa Fe, and San Miguel – is the second largest peatland mass in the country, next to the Agusan Marsh of Mindanao.

“We want to protect this, and what we are doing now contributes to raising awareness on the importance of tackling this issue,” Reposar said. – Rappler.com