CEBU, Philippines – Contingents from the cities of Toledo and Carcar were the big winners in Carmen town’s 50th Sinulog grand showdown open category on Sunday, January 22.

Seven communities of Carmen competed among themselves in the same categories. The last day of the Carmen Sinulog 50th anniversary celebration kicked off with a Mass officiated by Cebu Archbishop Jose Palma. 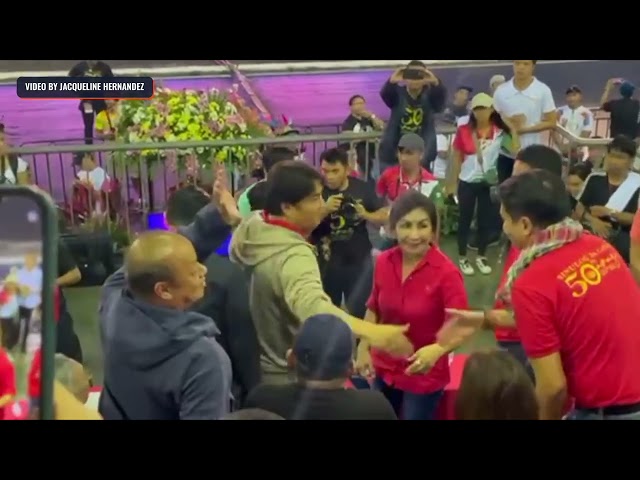 Garcia performed her 14th Sinulog dance to the Blessed Sto. Niño together with the Sarok dancers from Consolacion town.

The governor slipped and fell on her knees during the dance, but recovered to complete it.

She later noted that it was her first slip in 14 dances.

Garcia said that while she felt embarrassed, “I have been through tougher times.”

Cebu Provincial Board members and Capitol officials also joined the governor in her annual prayer of thanksgiving and supplication.

Garcia downplayed her disagreement with Cebu City Mayor Mike Rama over the Sinulog venue, which was moved for the first time to the South Road Properties, prompting a pull-out of the province’s contingent.

Three highly urbanized cities, Mandaue, Talisay, and Lapu-Lapu City, agreed with the governor and also stayed away from the Sinulog grand parade and ritual showdown.

The governor explained that the Sinulog sa Carmen is not competing with the city’s Sinulog Festival as it is already on its 50th year.

Garcia added that she and Rama were simply exercising executive prerogatives and judgment calls.

The governor thanked Rama and the city government for supporting the Sinulog sa Carmen.

The Cebu City mayor had approved the dispatch of 400 portable baths to Carmen.

Garcia also made good her P20-million pledge for the city’s Sinulog. – Jacqueline Hernandez/Rappler.com