Duterte issued Proclamation Number 333, through Executive Secretary Salvador Medialdea, Monday night – less than 24 hours after he announced that he would declare Vidal's burial day a holiday to allow Cebuanos to pay their last respects to the cardinal. 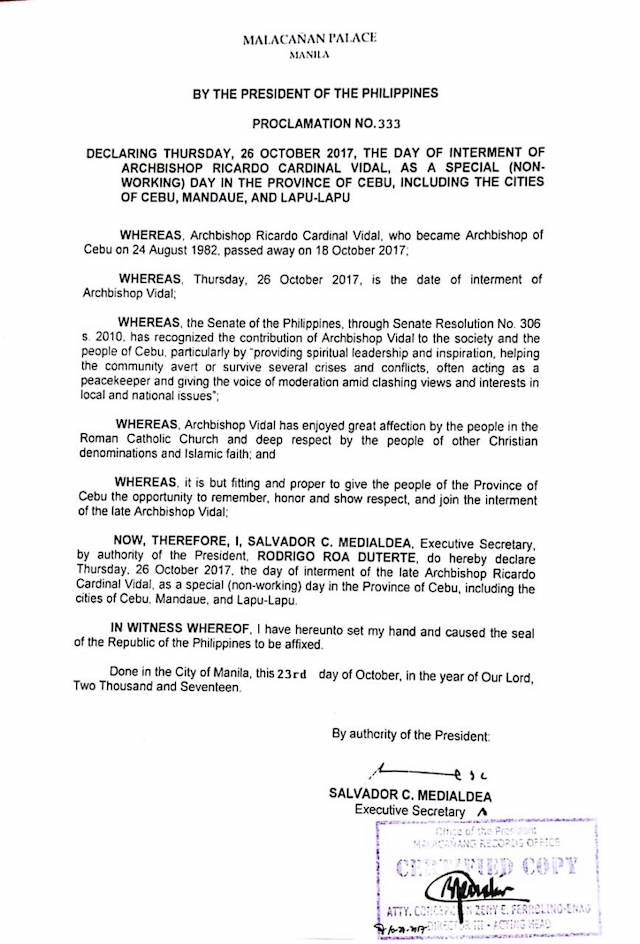 The holiday covers the cities of Cebu, Mandaue, and Lapu-Lapu.

"Archbishop Vidal has enjoyed great affection by the people in the Roman Catholic Church and deep respect by the people of other Christian denomination and Islamic faith," the proclamation added.

Medialdea also cited Senate Resolution Number 306, series of 2010, which has recognized the contribution of Archbishop Vidal to the society and the people of Cebu, particularly by "providing spiritual leadership and inspiration, helping the community avert or survive several crises and conflicts, often acting as a peacekeeper and giving the voice of moderation amid clashing views and interests in local and national issues."

The proclamation was signed by Medialdea.

Meanwhile, the Police Regional Office (PRO) in Central Visayas said it had mapped out security measures during the burial of Vidal. The interment will take place following a funeral procession around the Cebu Metropolitan Cathedral.

Superintendent Julian Entoma, PRO VII operations and plans division chief, said over 200 uniformed and plain-clothed policemen will be deployed along the procession route and within the vicinity of the cathedral.

The Cebu City Police Office is tasked to handle the security concerns during the burial day, Entoma said.

Vidal, who became Archbishop of Cebu on August 24, 1982, died October 18, one week after he was rushed to the hospital due to fever and shortness of breath.

Secretary Michael Dino, the Presidential Assistant for the Visayas, thanked Duterte for "heeding the call of the people of Cebu and all who have been touched by the life of the late Cardinal Vidal" in declaring October 26 a holiday.

It was Dino who communicated to the Office of the President on October 21 the Cebuano's wish to have Vidal's burial day be declared a holiday. – Rappler.com