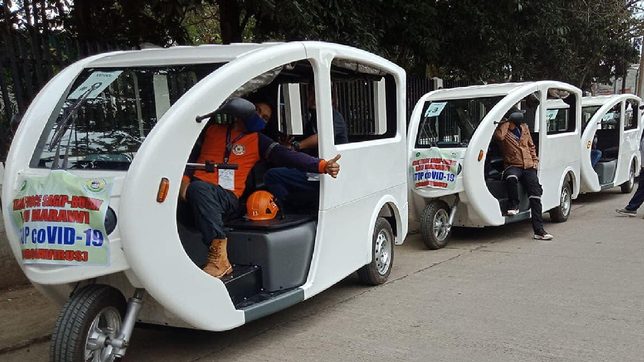 E-TRIKES. The Marawi City government has yet to see to it that all units work efficiently with enough charging stations.

Facebook Twitter Copy URL
Copied
According to a COA audit report released July 29, the e-trikes have remained idle since the energy department transferred them to the city government

200 e-trikes that were part of a P106.65-million project intended to provide employment to displaced families in Marawi City could go to waste.

According to an audit report released July 29, the e-trikes have remained idle since the Department of Energy (DOE) transferred them starting June 14, 2018 until May 30, 2019 to the local government.

This was part of the DOE’s Energy Efficient Electric Vehicles Project that sought to help 200 families whose lives were disrupted by the Marawi Siege in 2017. The project – premised on electric tricycles running on rechargeable batteries – was seen to provide “energy-efficient transportation” while giving livelihood opportunities too.

There was one major unforeseen hitch, however: there were no charging stations in Marawi City.

While the DOE provided the e-trikes, the city government was supposed to take care of the charging stations – something it did not do. Uncharged, the e-trikes were immobilized.

The two-year deployment plan recommended that the local government set up 5 charging stations for the 200 units, but only two such stations have been set up, the audit team was told during an exit conference with city officials.

The audit team warned that the longer the e-trikes remained idle, the more likely parts would break down, defeating the purpose of the project and leaving intended beneficiaries without livelihood.  The Commission on Audit directed Marawi City’s Engineer’s Office to facilitate the creation of the critical charging stations. – Rappler.com