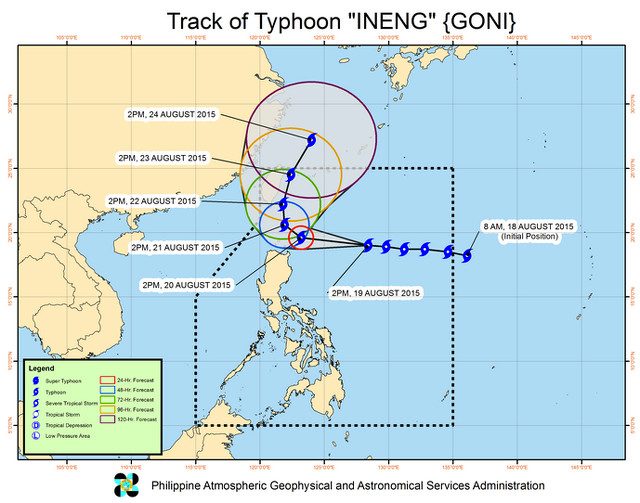 As of 4 pm, Ineng was located 690 kilometers east of Calayan, Cagayan, with maximum sustained winds of 180 kilometers per hour near the center and gusts of up to 215 km/h, state weather bureau PAGASA said.

Batanes and Cagayan provinces are currently under public storm warning signal number 2. In these provinces, winds of 61-120 km/h are expected to be felt in the coming 24 hours.

Wave height at open sea may reach 4.1 to 14 meters in these areas.

The following areas, meanwhile, are under signal number 1, where where winds of 30 to 60 km/h are expected to be felt within the next 36 hours:

The system is moving towards the west at a speed of 20 km/h, and is estimated to have moderate to heavy rainfall within its 700 km diameter.

The storm is estimated to be 185 km east northeast of Calayan, Cagayan by Thursday noon, August 20, and current forecasts see Ineng’s path eventually curving towards Taiwan in the coming days.

It is expected to be outside the PAR by the afternoon of Monday, August 24.

Meanwhile, an enhanced southwest monsoon (habagat) will be felt in Palawan and the Visayas, the bureau said, while occasional rains over Luzon’s western sections are possible in the coming days.

The next bulletin on Ineng will be issued at 11 pm Wednesday. – Rappler.com