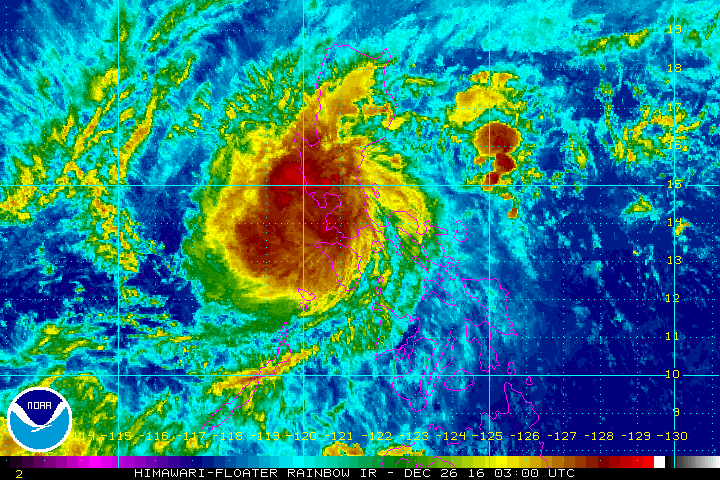 The typhoon is already in the vicinity of Tingloy, Batangas. It maintained its speed, moving west at 20 kilometers per hour (km/h).

PAGASA said Nina is expected to exit landmass within the day, which means weather would begin improving on Tuesday, December 27.

Nina had made its 1st landfall in Bato, Catanduanes at 6:30 pm on Sunday, December 25. Catanduanes Governor Joseph Cua said his entire province lost electricity after the typhoon hit land.

Nina then made its 2nd landfall in Sagñay, Camarines Sur around 9:30 pm on Sunday. Camarines Sur has since been placed under a state of calamity.

The typhoon made its 3rd landfall in San Andres, Quezon at 2 am on Monday; its 4th landfall in Torrijos, Marinduque at 4:30 am; and finally, the one in Batangas at 9:15 am. Even though Nina has weakened, PAGASA said residents in its path should remain on alert.

Moderate to heavy rain is still being experienced within Nina’s 400-km diameter, which could bring floods and landslides. Strong winds may damage medium- to high-risk structures, uproot trees, and destroy crops, added PAGASA.